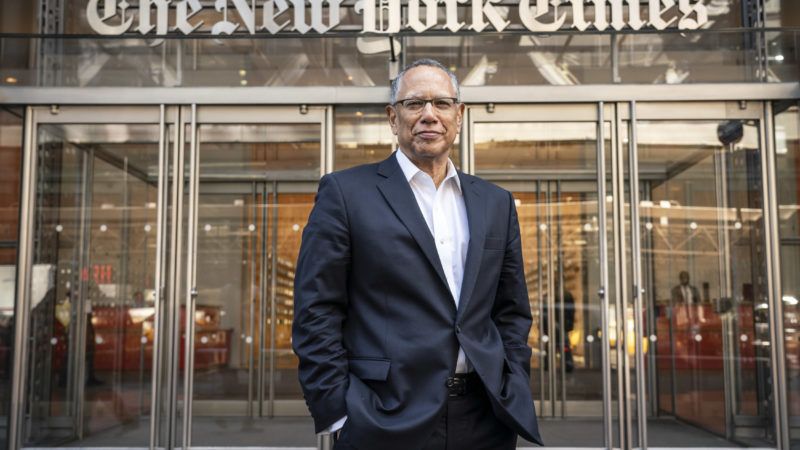 Smith should be commended for raising tough questions about why Reade was handled so differently than Brett Kavanaugh's accusers. Baquet's defense of this disparate treatment collapses under the most basic scrutiny.

The delay, according to Baquet, was because the Times proceeded cautiously, conducting its own reporting in order to gather all the information a reader would need "to think about what to make of this thing." Simply noting that Reade, a former Biden staffer, has claimed that he sexually assaulted her in 1993, was less important than getting the story "as close to right as we could."

That's all well and good, though, as I have noted several times, this was not the approach the Times took with Kavanaugh's accusers, whose allegations were publicized by the paper as they came to light, generally without additional or original reporting.

To his credit, Smith raised this very issue with Baquet, and the answer was enlightening:

I've been looking at The Times's coverage of Justice Brett M. Kavanaugh. I want to focus particularly on the Julie Swetnick allegations. She was the one who was represented by Michael Avenatti and who suggested that Kavanaugh had been involved in frat house rapes, and then appeared to walk back elements of her allegations. The Times wrote that story the same day she made the allegation, noting that "none of Ms. Swetnick's claims could be independently corroborated."

Why was Kavanaugh treated differently?

Kavanaugh was already in a public forum in a large way. Kavanaugh's status as a Supreme Court justice was in question because of a very serious allegation. And when I say in a public way, I don't mean in the public way of Tara Reade's. If you ask the average person in America, they didn't know about the Tara Reade case. So I thought in that case, if The New York Times was going to introduce this to readers, we needed to introduce it with some reporting and perspective. Kavanaugh was in a very different situation. It was a live, ongoing story that had become the biggest political story in the country. It was just a different news judgment moment….

But do you think looking back that The Times hewed to its standards both on Kavanaugh and on Biden, even though the treatment in the moment was so different?

I do. The standard, to be really simple, is that we try to give the reader the best information we can come up with at the time. And we try to give the reader the information they need to make their own judgments. Unless we can make the judgment. And Kavanaugh was a running, hot story. I don't think it's that the ethical standards were different. I think the news judgments had to be made from a different perspective in a running hot story.

This is deeply unpersuasive. The accusations against Kavanaugh were a "running, hot story" in part because the media covered them aggressively from the outset. Reade's story might well be running and hot if the Times treated her as it treated Christine Blasey Ford.

Case in point: In the midst of the Kavanaugh cycle, Times columnist Michelle Goldberg thanked Ford for her heroism. Here was how Goldberg described Ford's retelling of the incident with Kavanaugh: "Her soft voice cracked as she spoke. She smiled a lot; her attempts to make everyone see how agreeable and reasonable she is were heart-rending. But she was also poised and precise, occasionally speaking as an expert—she's a psychology professor—as well as a victim. Watching her push through her evident terror was profoundly inspiring." The column was titled "Christine Blasey Ford's Sacrifice."

Goldberg has now weighed in on Reade's allegation. The words "hero" and "sacrifice" do not appear in this column, which is titled "What To Do With Tara Reade's Allegation Against Joe Biden?" The tone makes clear that Goldberg views Reade as an inconvenience who must be dealt with. And the villain of this story is not Biden but "those using this strange, sad story to hector feminists into pretending to a certainty they have no reason to feel." Goldberg asserts that they are "trolling the #MeToo movement" and acting in bad faith.

I'm not so sure. Is it trolling to hold feminist activists, for whom "believe all women" is an important slogan, to their convictions? Perhaps feminist organizations—recall that Planned Parenthood and NARAL both tweeted "We still believe Julie Swetnick #BelieveSurvivors" weeks after her allegation fell apart—should have anticipated being called out for this obvious double standard.

In her latest column, Goldberg comes off as quite skeptical of Reade, in large part because Reade previously expressed kooky pro-Russia views:

Reade seems almost engineered in a lab to inspire skepticism in mainstream Democrats, both because her story keeps changing and because of her bizarre public worship of President Vladimir Putin of Russia. "President Putin has an alluring combination of strength with gentleness," she wrote in a since-deleted 2018 Medium post. "His sensuous image projects his love for life, the embodiment of grace while facing adversity." (Reade has since said her comments about Russia stemmed from a novel she was writing, though the Medium article is written as an op-ed essay.) In December she tweeted, with worrying grandiosity, "I worked for the Senate, I know the plan to bring Russia to its knees."

I've heard from other mainstream journalists that Reade's fangirling over Putin is an important part of what's giving them pause—this mattered a great deal to Salon's Amanda Marcotte, for example. But no one has articulated a particularly compelling case for why Reade's political views are relevant to her accusation about Biden.

This is not to say that Reade's account should be readily believed. The biggest issue is not merely that she waited so long to come forward, but that she misled journalists about what allegedly happened to her. The Washington Post made the best case for moving slowly with respect to the Reade story in its justifiably careful piece. The Post spoke with Reade last year about alleged sexual harassment in Biden's offices, and she stated definitively:

"This is what I want to emphasize: It's not [Biden]. It's the people around him who keep covering for him," Reade said, adding later, "For instance, he should have known what was happening to me….Looking back now, that's my criticism. Maybe he could have been a little more in touch with his own staff."

Reade was referring to alleged bullying, not alleged sexual assault. But she clearly gives the impression here that Biden himself is not the person responsible for whatever wrongdoings she allegedly suffered. If I were a Post reporter and Reade had given me the above quote a year ago, I would be quite perturbed that her story has since changed so dramatically.

These are important issues that are well worth scrutiny from the Post, the Times, and other journalistic outlets. It is not an indictment of the media that they are proceeding cautiously with Reade. But it's ludicrous to contend, as Baquet does, that the same standard is being exercised in this case as was exercised in Kavanaugh's.