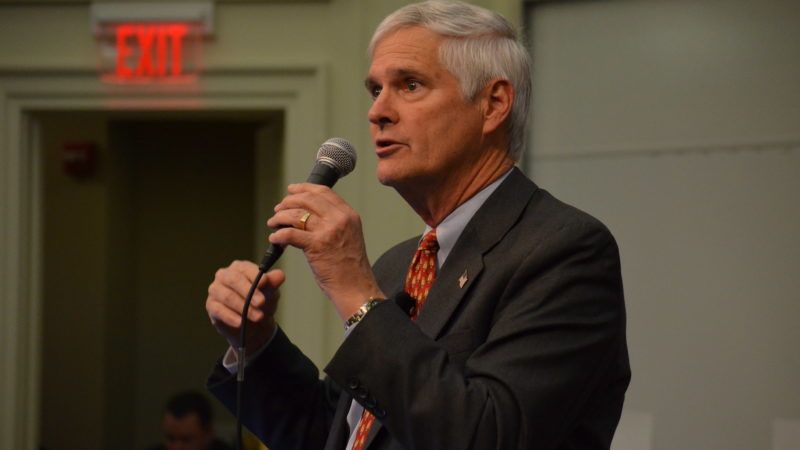 The L.P., America's third-place finisher in the previous two presidential elections, is scheduled to determine its 2020 ticket during a national convention on May 21-25.

Gray, 75, was a Superior Court judge in Orange County, California, from 1989 to 2009, during which time he was best known for his pioneering stance on marijuana prohibition and his unsuccessful Republican primary run against longtime Rep. Bob Dornan in 1998. Gray switched to the L.P. soon thereafter, finishing in fourth place with 1.8 percent of the vote in a 2004 U.S. Senate race won by incumbent Democrat Sen. Barbara Boxer. After being cultivated by former New Mexico Gov. Gary Johnson for the vice presidential slot in 2012, Gray became part of what was then the party's second-most successful White House ticket in history, earning 1.0 percent of the national vote.

The announcement, which comes pretty late in the nominating game (anarchist Adam Kokesh has been running already for more than two years), was, in Gray's telling, set into motion with the demise of the presidential bid by ex-mayor/senator/governor Lincoln Chafee, who Gray had backed.

"After [Chafee] hung up the phone," the judge recounted in his email newsletter, "his staff members asked if I would consider running in his place. My answer was no. But, since they were persistent, I told them that I would take two days to consider that possibility."

"During those next two days," Gray continued, "I spoke to several high-ranking and well-respected Libertarians around the country, and they were all supportive and even enthusiastic. So, also considering the fact that I always thought I would be a good candidate, I called Larry Sharpe, who is a friend in New York who was a great Libertarian candidate for Governor in the 2018 election. During the discussion, I told Larry that if he would be my running mate, I would throw my hat in the ring. On Friday, April 10 he agreed. So that afternoon we had a Zoom meeting of Governor Chafee's staff, along with the campaign manager of Riverside County Board of Supervisor Jeff Hewitt's campaign where we introduced ourselves to each other and then started planning our campaign."

Those two names will certainly focus attention within the L.P. rank and file. Hewitt, the highest-ranking Libertarian elected official in the country, had previously thrown his support behind the ex-convict entrepreneur/comedy enthusiast Mark Whitney, as had some of Hewitt's well-respected braintrust. And Sharpe, one of the party's leading and most ubiquitous figures (he is scheduled to deliver the keynote at the national convention, though the physical status of the gathering is currently in doubt), was certainly not expected to make a second consecutive run at the vice presidential nomination.

"The two guys that I adore most are the two people I voted for first as Libertarians: Gary Johnson and Judge Gray," Sharpe told me. "They are literally the only two people who could have gotten me to run for anything….If Gary Johnson had decided to run and asked me, I would have said yes to him, too." (Sharpe, a former Marine, had told me back in 2017: "I will always be loyal to Gary Johnson. Without him I'm not a Libertarian.")

Until now, the primary and caucus season has been dominated by Future of Freedom Foundation founder Jacob Hornberger, who has received the most results among human candidates in six out of the eight nonbinding state contests, compared to two such victories by political satirist Vermin Supreme. (Libertarians often prefer expressing their votes for such categories as "no preference.") Hornberger also leads the popular vote, 22 percent to Supreme's 10 percent and 1996 vice presidential nominee Jo* Jorgensen's 9.6 percent.

Hornberger, a longtime friend of 1988 L.P. nominee Ron Paul, is the favorite of the party's growing and hungry Mises Caucus, members of which have frequently expressed criticism of the type of allegedly milquetoast libertarianism represented by the last two presidential tickets, especially 2016 V.P. nominee Bill Weld. Team Hornberger is likely to laser in on Gray's presence on the 2012 ticket, his prior support for the Weld-like northeastern party-switcher Chaffee, and his enthusiasm for the ex-Massachusetts governor himself ("I really believe that Bill Weld was a really great addition to the campaign," Gray said to me in 2016 five days after the veep nominee went on Rachel Maddow's MSNBC program for the purposes of "vouching for Mrs. Clinton").

But Sharpe, one of the few figures well respected among all the party's notoriously quarrelsome factions, counters that Gray is not some Republican-come-lately re-run.

"This virus, this crisis, this destruction of our economy, destruction of our health, this should be the piece that shows you there's got to be a better way. And Judge Jim Gray is the better way," Sharpe told me. "He's the guy who was saying 'Let's fix the war on drugs' before it was cool. He's the guy who was saying 'I'm a Libertarian' before it was cool. He's the guy who's saying 'I want to make changes' before the problems actually hit. As soon as he saw things to be bad, he wanted to make the change. He's written books about it. He's an advocate about it. Now he can be your president."

Sharpe will likely be Gray's best asset within the party, though the coming days should indicate whether the party's money and political talent (such as either exist) will come off the sidelines and rally around an old familiar face.

"When Chafee gave up," Sharpe said, "I think the pragmatic part of the party just basically couldn't believe it, like, 'What do we got now? Oh my God.'…And then when Judge Jim Gray stepped up, I think most of the people were like, 'Oh good, here's our regular guy that we wanted.'"

Libertarians select their presidential and vice presidential nominees separately, with the veep pick coming second at the convention. Presidential nominees are given space to lobby for their preferred choice, and, in practice, delegates have backed that advice the three previous national conventions, though not without some nose-holding. (Sharpe, relatively unknown at the time, came within a whisker of beating Weld in 2016.)

As of now, Sharpe would seem to have much better chances of securing the veep slot than Gray does at besting Hornberger. Though Monday also saw another V.P. announcement that could theoretically attract attention: international man of mystery John McAfee, who finished third for the 2016 L.P. presidential nomination. McAfee ran for the presidential nomination again this cycle only to drop his half-hearted presidential bid and propose a ticket with Vermin Supreme. He has now announced that he is open to running with Adam Kokesh.

"I am happy to join forces with Adam in my bid for the Vice-presidential slot within the Libertarian Party," McAfee said in a statement passed around by the Kokesh campaign. "Adam's platform is close to my own and I fully endorse it. Even though I am continuing my bid for President, if Adam wins I will be happy to fully support him as his running mate."

Added Kokesh: "I am honored today to be endorsing my friend John McAfee for the Vice-Presidential nomination of the Libertarian Party. It's hard to even know where to begin in so honoring a man of such legendary stature. His corporate credentials speak for themselves and there are few household names in tech that rival his. His lifestyle has been so libertarian that even I am often found envious, even as someone regularly praised on that count. His commitment to libertarian principles is unquestionable. His reach in social media is undeniable. His effectiveness as a freedom activist is proven. As our nominee for Vice President, he would bring unique capabilities to our team that none of our current presidential or vice-presidential candidates possess, especially regarding Bitcoin and the crypto-community."

Watch Jim Gray tell Reason below in 2010 about the six groups that benefit most from the drug war: