Kids Missing School Because of Coronavirus? Don't Worry Too Much

Most will avoid significant academic losses in the long term. 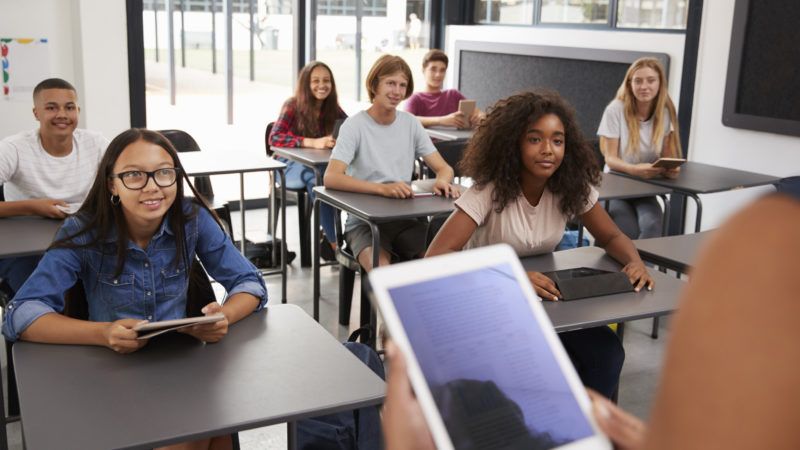 Many people are finding it hard to parent in the age of COVID-19. They're trying to supervise their children and work from home at the same time, a combination made yet more difficult when they're being asked to ensure that the kids spend sufficient time and effort on their online classes.

Some frustrated parents are admitting defeat. One mom, archeologist Sarah Parcak, tweeted that she had informed her son's first-grade teacher they no longer had the time or patience to participate in a virtual classroom. "His happiness trumps crappy math worksheet management," she wrote.

Meanwhile, education officials are worried that the children of inattentive parents could be falling behind. Some school districts are discussing mandatory remedial summer school for all kids once the pandemic has passed. The Chicago Sun-Times editorial board endorsed such a measure, claiming that "there's no good argument against mandatory summer school. CPS and parents—and the Chicago Teachers Union—must do whatever it takes to get school kids back on track." The New York Times reports that education officials around the country have been considering "summer sessions, an early start in the fall, or perhaps having some or even all students repeat a grade once Americans are able to return to classrooms."

These are stressful times, but parents and teachers shouldn't be overly worried about students falling behind. Mental health and happiness should come first.

Indeed, there's a strong argument to be made for letting many kids simply enjoy this extended summer break.

"There will probably be some falling behind, but people are likely to catch up," says Bryan Caplan, an economist at George Mason University. "People do get lost over the summer and then make it up." Studies show that kids typically lose some of their academic skills over long breaks: summer learning loss is a real thing. But studies also show that most students forget much of what they learn in school, period. "Many young people who learn the material forget it soon anyway," says Caplan. "The idea there's going to be some noticeable permanent deficit is weak."

Neal McCluskey, director of the Center for Educational Freedom at the Cato Institute, tells Reason that the extended break might leave some kids unprepared to pass their standardized tests in the short term but probably wouldn't do lasting damage to their brains.

"I don't think the time away from school will impact kids' intelligence," he says. "There are real questions about how truly important a lot of material is—will it have a major impact on someone's life if they miss modern British poets?—but they will miss out."

According to McCluskey, younger kids are more at risk of falling behind than older kids, since the most valuable skills—reading and basic numeracy—are taught at an earlier age. "A considerable part of the problem is that our system has to largely batch-process kids based on their ages, which makes falling behind a major problem," says McCluskey.

And of course, students of all ages who rely on school for non-academic purposes, like supplemental nutrition or a respite from an abusive home life, will be poorly served by this unusually long period away from school.

But it would be shortsighted to pretend that every moment away from formal schoolwork is some missed opportunity for child enrichment. Reason's Lenore Skenazy notes in The Washington Post that unstructured free time can make room for mental and emotional growth:

Though not every youngster will become an Einstein while quarantining, many seem to be turning into the kids they would have been if they'd grown up a generation or two earlier, with more time to discover their real interests and hobbies (remember those days?), before childhood got so structured and busy.

What I mean is: It's all okay. Our kids are not going to seed even if they are sleeping, gaming and bingeing on YouTube. In fact, they're growing, simply because kids are always growing and learning from everything—houses of cards, Nerf guns, Barbies, baths, videos, but most of all from that vital resource more rare and precious than toilet paper: free time.

My advice for would-be coronavirus helicopters? Think of the quarantine as an AP class in chilling. You can help your kids ace it by stepping back.

Many stressed-out parents would undoubtedly improve their own mental health if they took Skenazy's advice.

Similarly, education officials should explore non-coercive options, such as supplemental tutoring for those who think they need it. Forcing every kid to repeat the grade or attend summer school would be a punishment that most students did nothing to deserve.