A hapless mayor and overpraised governor made false promises, gave inaccurate health information, and helped turn Gotham into the pandemic's epicenter, according to The New York Times 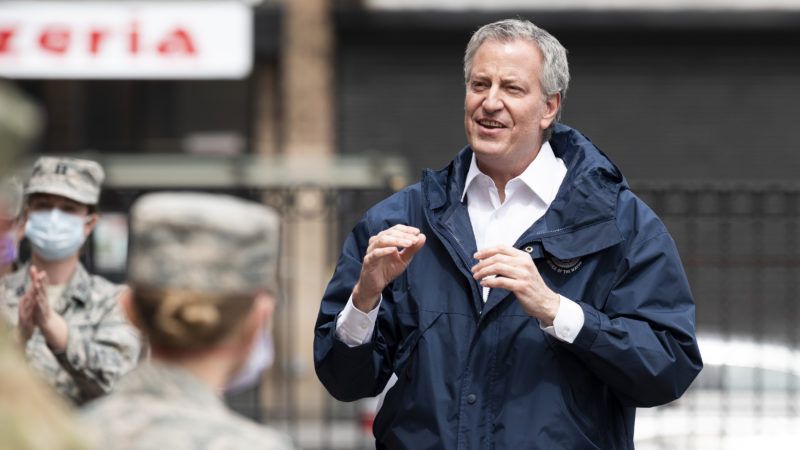 The New York Times Wednesday published a long and damning breakdown of how the overlapping and eternally feuding governments of the city and state of New York helped turn the already difficult challenge of managing COVID-19 in the country's densest metropolitan area into the health and public-policy catastrophe we are enduring today.

This is no mere didn't-take-that-one-meeting-or-memo-seriously kind of Monday-morning quarterbacking, which too often passes for post-facto analysis of government crisis management. Instead, it's a detailed yet necessarily incomplete list of false promises, bad epidemiological advice, and ideologically motivated decision-making.

It's impossible to measure precisely the extra infection/morbidity rates caused by New York's abundant policy errors, but the article quotes an estimate from the person with the most directly relevant resume: former Centers for Disease Control and Prevention (C.D.C.) director Thomas Frieden, who prior to holding that post for the entirety of President Barack Obama's administration was health commissioner for the city of New York.

"Frieden said that if the state and city had adopted widespread social-distancing measures a week or two earlier, including closing schools, stores and restaurants," the Times reported, "then the estimated death toll from the outbreak might have been reduced by 50 to 80 percent."

It is not necessary to share Frieden's numerical assumptions or mitigation preferences in order to assign some direct policy blame. Here are three main categories of New York's COVID-response failure.

The article starts with the last time that Gov. Andrew Cuomo and Mayor Bill de Blasio made a joint appearance to address their constituents: March 2, the day after the first New Yorker tested positive for COVID-19. "Out of an abundance of caution we will be contacting the people who were on the flight with her from Iran to New York," Cuomo vowed.

However: "No one ever did that work," the Times found.

The CDC, which has failed to heed its own guidelines on multiple occasions during this crisis, nonetheless spells out very clearly in its 2006 Implementation Plan for the National Strategy for Pandemic Influenza the importance of government leaders shooting straight.

"Timely, accurate, credible, and coordinated messages will be necessary during a pandemic, and…inconsistent reporting or guidance within and between nations can lead to confusion and a loss of confidence by the public," the plan advises. "Information provided by public health officials should therefore be useful, addressing immediate needs, but it should also help private citizens recognize and understand the degree to which their collective actions will shape the course of a pandemic."

Both the widely mocked de Blasio and the overly adulated Cuomo have repeatedly failed on these communicative counts. Like the president they despise, for example, both men made empty early boasts about their ability to withstand the worst.

"We can really keep this thing contained," de Blasio said on Feb. 26.

"Everybody is doing exactly what we need to do," Cuomo said at their March 2 press conference. "We have been ahead of this from Day 1."

The cruel, exponential math of epidemics can make exercises in hindsight seem nitpicky, even unfair. But New York's political chieftains weren't just making promises they couldn't keep, they were actively dispensing advice and crafting policy in contradiction to the understood science at the time.

On Feb. 2, de Blasio stated at a coronavirus press conference that, "What is clear is the only way you get it is with substantial contact with someone who already has it. You don't get it from a surface. You don't get it from glancing or very temporary contact based on what we know now." New York Health Commissioner Dr. Oxiris Barbot added: "This is not a time to fall prey to false information that you may be seeing on the internet, to fall prey to the stigma.… This is not something that you're going to contract in the subway or on the bus."

Both of those confident assertions were not, in fact, summations of what was known about coronavirus transmissibility at the time. Three days before de Blasio's medical advice, at a press briefing of the president's Coronavirus Task Force, Dr. Anthony Fauci stressed not what was conclusively known, but rather what was conclusively not known—"The issue now with this is that there's a lot of unknowns," Fauci said.

And yet even in that Jan. 31 presentation, Fauci made clear what the De Blasio administration would consistently deny for the next six weeks: That the virus was devilishly transmissible, including from people who had no reason to believe they were infected.

"In the beginning, we were not sure if there were asymptomatic infection, which would make it a much broader outbreak than what we're seeing.  Now we know for sure that there are," Fauci said (italics mine). "It was not clear whether an asymptomatic person could transmit it to someone while they were asymptomatic. Now we know from a recent report from Germany that that is absolutely the case."

You could fill a whole series of 30-second ads showing de Blasio claiming the exact opposite.

On March 10, the mayor insisted on MSNBC that "If you're under 50 and you're healthy, which is most New Yorkers, there's very little threat here. This disease, even if you were to get it, basically acts like a common cold or flu. And transmission is not that easy." The next day—just hours before the National Basketball Association shut down its entire season—de Blasio urged New Yorkers to "not avoid restaurants, not avoid normal things that people do," adding: "If you're not sick, you should be going about your life."

On March 15, to the irritation of his own health department, the mayor claimed that "public health folks say it appears that transmission is when people are symptomatic."

Even as late as last week—63 days after Dr. Fauci said that asymptomatic transmission was a certainty—de Blasio claimed that it was "only in the last really 48 hours or so" that NYC health officials "feel they've seen evidence around the world, particularly a new study coming out of Singapore, that shows more evidence that this disease can be spread by asymptomatic people."

Many of the de Blasio administration's most scientifically unsupported statements during the coronavirus outbreak have been used in the service of justifying his most heavily scrutinized policies. This is no accident.

Faced with a literal life-and-death issue, the mayor has in several critical moments chosen his own ideological commitments over the urgent advice of health scientists. None more important than his treatment of the country's largest school system.

New York City was far behind the national and international curve in closing down public schools to stop the community spread of COVID-19. The reason had little to do with science—indeed, Demetre Daskalakis, the city's head of disease control, reportedly threatened to quit if the schools were not shuttered, as did several other city health officials.

But de Blasio sees schools as delivery systems of government services to the poor, and as the Times delicately (and over-generously) phrased it, the mayor's "progressive political identity has been defined by his attention to the city's have-nots." So even as three dozen city virologists were warning that keeping the schools open amounted to "gambl[ing] with the lives of New Yorkers," de Blasio was exempting the institutions from his order to stop all city gatherings of 500 or more people, explaining with perhaps more literalism than he intended that the schools were one of "three things we want to preserve at all cost."

Several teachers and union officials have accused the Department of Education of bottling up news about teachers testing positive, and threatening educators with reprisals if they warned parents to keep their kids home from possibly infected schools.

Preventing the dissemination of bad information is a classic managerial mistake, one particularly endemic in poorly run governments. So, too, is a stubborn unwillingness to learn. Perhaps most distressing in the Times article is not the particulars of policy errors, but an expressed unconcern at acknowledging them: "The governor and the mayor emphasized that they had no misgivings about their initial handling of their response."