Plus: Court upholds Texas abortion ban, Americans say they're choosing to stay at home, a doctor's view on hydroxychloroquine, and more... 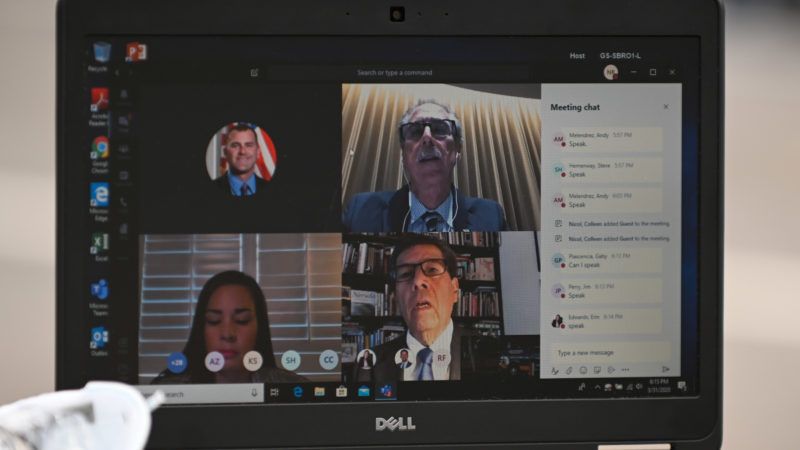 Videoconferencing technology has been helping to keep people connected, employed, and semi-sane in these unprecedented times. Zoom has emerged as a crowd favorite since the COVID-19 pandemic's start, quickly gaining ground on old-school competitors like Skype, Google Hangouts, and Apple's FaceTime. So, of course, tech-panicky politicians want to interfere.

This time, the theatrics are coming courtesy of congressional Democrats and state attorneys general—two groups skilled at taking social ills and science problems and turning them into self-promotional opportunities.

In statements to Politico, spokespeople for Bennet and Klobuchar expressed vague concerns about Zoom user "privacy and security." Brown put his thoughts in a letter last week.

Stories about lax data privacy practices, leaked videos, and hacked meetings have made the news recently, and these are certainly worth keeping a media and privacy watchdog spotlight on. But the political impulse we're witnessing—broadly accuse first, find evidence later (maybe)—is a dangerous one.

In Washington, independent and supposedly neutral investigations by federal regulators have a way of turning into congressional witch hunts when bureaucrats bring back results legislators don't like.

An FTC spokesperson told Politico the agency shares "concerns about the need to ensure the privacy and security of videoconferencing systems in light of their central importance during this crisis" but could not comment on specifics with regard to Zoom.

Attorneys general in Connecticut, Florida, and New York are also part of a group effort seeking information and company data from Zoom.

For its part, Zoom notes that it "was built primarily for enterprise customers—large institutions with full IT support," and that "usage of Zoom has ballooned overnight," from a maximum of 10 million daily meeting participants in December 2019 to more than 200 million per day in March. In the shift, "we recognize that we have fallen short of the community's—and our own—privacy and security expectations," wrote CEO Eric S. Yuan in a post laying out steps the company is taking to fix that.

Certainly, government officials and anyone conducting sensitive business should avoid free Zoom calls and other insecure communications platforms (which includes, of course, Skype, FaceTime, Google Hangouts, and their ilk, too). And if Zoom proves incapable of keeping its promises to do better, consumers can, should, and will move on.

But scaring up too much fear about Zoom privacy issues at the moment is silly. Those of us using the service for cross-country family hangouts, idle chats with old friends, exercise classes, virtual happy hours, and other mundane purposes face little significant threat, and certainly no more than we do on other mass-use social media and communications services.

The bottom line: Calls to investigate Zoom right now are being driven by a need for politicians to seem like they're "doing something" (anything) in response to the COVID-19 outbreak. But while officials are right to be wary of using Zoom for government business, they're probably just being melodramatic busybodies about the rest.

See Also: Eugene Volokh on "Zoombombing and the Law."

An 81% majority of the public says it's currently the right decision for states to tell residents to stay at home unless they have an essential reason for going out. Just 8% say it's the wrong decision. An even broader 89% say they are personally trying to stay home as much as possible, with only 6% saying they're not making any such effort.

Doctors, not politicians, should decide whether hydroxychloroquine is appropriate for COVID-19 patients, writes Jeffrey A. Singer, who has been a practicing clinical physician for more than 35 years. Adds Singer:

What I've seen about hydroxychloroquine makes me cautiously optimistic. Doctors should not be prohibited from using their best clinical judgment and recommending it to patients—especially considering the fact that these drugs have been around for a long time, which means we are familiar with their risks and complications. The government should stay out of this and let clinicians practice medicine, provided they get their patients' informed consent. Patients have a fundamental right to try drugs they think may save their lives. Doctors they consult must be free to give patients their best advice, unencumbered by government overseers.

I appreciate all the best wishes I have received. I have been retested and I am negative. I have started volunteering at a local hospital to assist those in my community who are in need of medical help, including Coronavirus patients. Together we will overcome this! pic.twitter.com/9SeypT7rL6

I've been reading a lot of the contrarian (primarily from fellow righties) COVID19 opinions, and I wanted to work through them in good faith. I find most of them pretty unpersuasive. As they say, THREAD:

In the least surprising news of the year, the anti-smoking lobby thinks COVID-19 justifies the complete and permanent prohibition of cigarettes. https://t.co/gnkFpgtzak