Plus: Robert Kraft flies supplies to Boston from China, Laredo fines people for going without masks, and more... 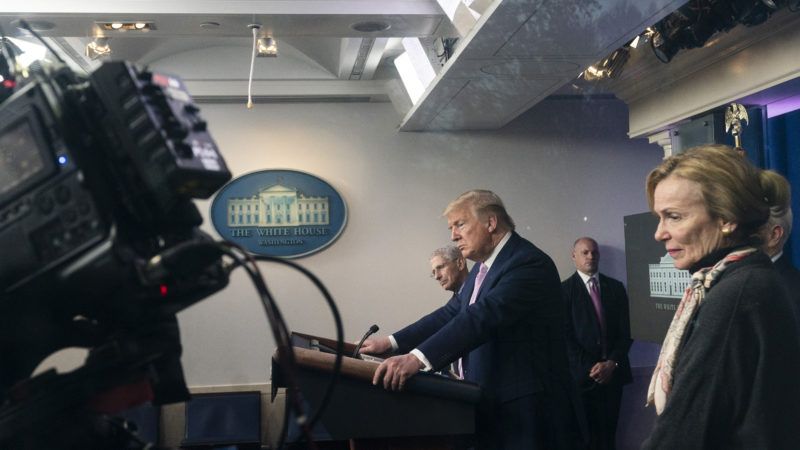 Trump tells states to deal with medical supply shortages on their own. The president hit a new low last night in his attempts to rewrite the history of how his administration has handled the COVID-19 outbreak. In his now-nightly televised press conference, Donald Trump told reporters that states seeing a surge of coronavirus cases and a dearth of medical supplies had only their own leaders to blame for not seeing the gravity of this situation as early as he had and prepping accordingly.

That's exactly backwards, of course. Leaders of states seeing early cases (such as Washington and New York) and even some that weren't (such as Ohio) started taking COVID-19 seriously much sooner than the president did. Trump spent the start of the outbreak downplaying it as something Democrats and the media were hyping to spite him. He said on February 10 that "by April, you know, in theory, when it gets a little warmer, it miraculously goes away." On February 26, when the U.S. had 15 diagnosed COVID-19 patients, Trump said cases were "going very substantially down, not up."

In response to preparedness concerns, Trump kept saying that a vaccine or treatment was imminent and we had an abundance of tests. (Here he is on March 6: "anybody that needs a test can have a test. They are all set. They have them out there. In addition to that they are making millions more as we speak.") As late as last week, as social distancing was taking off with many state leaders' support, Trump was suggesting that "The LameStream Media" wanted to see America in economic ruins in hopes it would hurt his election chances.

The LameStream Media is the dominant force in trying to get me to keep our Country closed as long as possible in the hope that it will be detrimental to my election success. The real people want to get back to work ASAP. We will be stronger than ever before!

By now we're inured to Trump's narcissistic blame-shifting, but it really is astounding how unflinchingly he's kept it up even in the face of a deadly pandemic that is already cratering the economy and is projected to cost a shocking number of U.S. lives.

The Fake News Media and their partner, the Democrat Party, is doing everything within its semi-considerable power (it used to be greater!) to inflame the CoronaVirus situation, far beyond what the facts would warrant. Surgeon General, "The risk is low to the average American."

Whether Trump believes his blame-shifting or just thinks he can make other people believe it is besides the point. Our president can't stop portraying every new COVID-19 horror here as either a conspiracy against him or somebody else's problem. Meanwhile, people across America are still having trouble getting tested; doctors and nurses don't have personal protective equipment; and both urban and rural areas are woefully short on hospital space and gear.

Which brings us back to Thursday night's press conference. Trump repeatedly touted the one thing he took some early initiative on—closing the border to foreign nationals from China and restrictions on travel from some European countries—as the thing that saved America from seeing 20 times the number of deaths we'll see. (Watch his whole performance here.) The president seemed unconcerned about states having to bid against each for supplies, instead chastising them for not snapping up spare ventilators at some point before this all hit.

"They have to work that out," said Trump. "They should have—long before this pandemic arrived—they should've been on the open market just buying, you could've made a great price. The states have to stock up. It's, like, one of those things. They waited. They didn't want to spend the money because they thought this would never happen. And their shelves, in some cases, were bare."

To those states, Trump essentially said better luck next time. "Within six months, [protective equipment and ventilators will] be sold for the right price and they've gotta stock up for the next time," he said, going on to gripe about hospitals and states wanting "thousands" of ventilators now.

"They call up and say, sir, could you send us 40,000 ventilators?" Trump said peevishly, as if it's somehow unprecedented for states to turn to federal emergency supplies in emergency situations. "Nobody's ever heard of a thing like this," he said.

Yes, there have been plenty of state and local failures during this crisis. But this is what those federal stockpiles are supposed to be for.

As for masks, Trump suggested people could just use scarves wrapped around their faces instead. "In many cases the scarf is better; it's thicker. I mean you can—depending on the material, it's thicker," Trump said Thursday evening.

Thickness is not the issue, of course; the ability of particles to penetrate a barrier is. A makeshift fabric mask may be better than nothing, but it will not do this better than equipment specifically designed for this purpose will.

And whatever good Trump's early travel restrictions may have done is rapidly being outweighed by the damage wrought by our lack of tests and approved masks.

In Houston, the fourth-largest city in the U.S., doctors and public health officials suspect the only reason the number of COVID-19 cases remains relatively low is because people can't get tested.

New England Patriots owner Robert Kraft just flew a company plane full of personal protective equipment from China to Massachusetts to provide to medical workers there. "It wasn't clear…whether Kraft or the state is paying for the protective equipment being imported from China," reports Politico. But the trip was necessary because Massachusetts has been unable to outbid the Trump administration and other states on the gear available domestically.

Gov. Charlie Baker "told the president the federal government was outbidding Massachusetts on equipment—even after advising states to work on getting their own supplies," says Politico. "A week later, the Bay State was still being outbid and had only received a fraction of what it requested from the Strategic National Stockpile. Baker grew increasingly frustrated at a recent news conference, saying he'd seen confirmed orders for millions of pieces of gear 'evaporate' before his eyes."

These are just two of many examples of the shitshow state and local leaders are facing trying to get COVID-19 tests and hospital supplies for their communities. As Trump continues to portray tests as readily available, treatments coming soon, and things mostly rosy but for his pet saboteurs, his words still (as NBC's Shannon Pettypiece wrote on March 20) stand "in sharp relief to the reality being described by the experts on the ground involved in the response."

Anyone out in public, or in an office, must wear a mask, bandanna, scarf or any fabric to cover both mouth and nose. Anyone found without one could face a fine of up to $1,000. https://t.co/UGPKgQIoFD

This map is meaningless and the Times should be ashamed of publishing it. All this shows is rural v. more populated areas where rural people must drive further even for necessities. pic.twitter.com/vKFI1PUYP6

Reverting to the laziest form of pre-lockdown partisan politics won't make the #coronavirus end any sooner.