While a Real Epidemic Raged, the Surgeon General Was Spreading Misinformation About Masks and Vaping

Jerome Adams clung to older, faulty narratives in the crucial early days of the coronavirus outbreak. 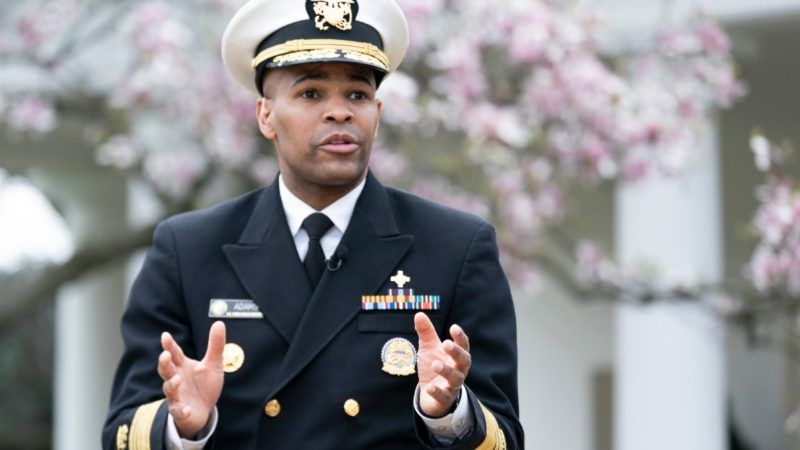 On March 13, President Donald Trump stood in the Rose Garden and declared a national emergency in response to the coronavirus pandemic.

The county's top doctor wasn't in D.C. but in New Orleans, soon to be a COVID-19 hotspot. Less than two hours before Trump took to the podium, Jerome Adams was speaking to a sparsely attended room at the Society for Research on Tobacco and Nicotine's (SRNT) annual conference.

SRNT is one of the biggest tobacco control conferences in the world. Academics, government officials, and nonprofits share research and ideas, mostly on how to regulate or ban nicotine products. A majority of registrants failed to show up, citing fears of contracting or spreading COVID-19. But Adams was clear: Even amid a global pandemic, regulating tobacco can't be ignored.

"I want to give you some COVID-19 context because there are a lot of people who are probably surprised that I'm here right now," said Adams. "Well, it's important for us to understand more people are going to die in the next hour from smoking-related illnesses than have died in the United States from COVID-19 so far." The statement sparked enthusiastic applause and even a whoop by an excitable attendee.

It's not entirely clear what relevance such a statement has, though. Most wouldn't consider a highly contagious disease with the potential to overwhelm health care systems to be in the same basket of priorities as the voluntary use of products all users know can be lethal. Such false equivalency now seems gruesomely nonchalant, given more than 4,000 people have died from COVID-19 so far in the United States.

Though COVID-19 was already hammering Italy—with the potential for similar situations to develop in Europe and the U.S.—Adams argued, "It is my belief as Surgeon General, that more people will die from misinformation, from panic, stigma, and discrimination than are going to die from the actual virus."

Speaking at this conference in the middle of a pandemic and warning that "stigma" could cause more deaths than the virus itself could charitably be described as misjudgments in retrospect. Still, they're not the only missteps Adams has made since the COVID-19 crisis began.

On February 29, Adams tweeted, "Seriously people- STOP BUYING MASKS! They are NOT effective in preventing general public from catching #Coronavirus, but if healthcare providers can't get them to care for sick patients, it puts them and our communities at risk!."

In a now-deleted tweet, sent on March 6, Adams said:

It's now clear these statements on the effectiveness of face masks weren't evidence-based recommendations but noble lies spread by government officials and the media meant to prevent shortfalls for health care workers.

Now Adams appears to be changing his tune on masks, writing on April 1, "Based on asymptomatic spread of #covid19 we asked CDC to look at new data to determine if we should change recommendations regarding which groups should wear masks to prevent spread. But if you choose to wear a face covering, this can't come at the expense of social distancing."

Aside from confusion on the issue of face masks, Adams has also inexplicably drawn a connection between the coronavirus and youth vaping. On March 23, Adams appeared on the Today Show to discuss COVID-19. Without evidence, Adams postulated that vaping could be the reason why young people may be at higher risk from COVID-19 than previously thought: "There are theories that it could be because we know we have a higher proportion of people in the United States and also in Italy who vape."

Adams continued, "we don't know if that's the only cause." Within a sentence, Adams neatly jumped from postulating an unproven theory to propagating it as fact.

There is zero evidence from anywhere in the world to support the claim Adams mooted. "There is no evidence that vaping increases the risk of infection or progression to severe conditions of COVID-19," says the University of East Anglia's Dr. Caitlin Notley.

The letter makes clear there is, as of yet, no evidence that vaping is an additional risk factor for COVID-19. The signatories warned FDA that if its communications are, "arbitrary and ill-conceived, spreading fear and confusion with little scientific basis and with unpredictable consequences, then it would be better if FDA and its media spokespeople did not comment further at this time."

Almost every independent expert concedes e-cigarettes are significantly safer than combustible cigarettes and have helped many smokers quit where other methods have failed. Few will disagree that teens shouldn't be vaping, but spreading unsubstantiated claims about the risks of e-cigarettes does not lend credibility to public health authorities, especially at a time of crisis.

While there is no research on vaping and COVID-19, there is some analysis of Chinese data and the association between smoking and the coronavirus. According to an article in the European Journal of Internal Medicine, "active smoking does not apparently seem to be significantly associated with enhanced risk of progressing towards severe disease in COVID-19." Similar results were found in an earlier preliminary analysis published in the online science platform Qeios, but data on this subject remains extremely limited.

In December 2018, Adams declared youth vaping an "epidemic." It's troubling to think the surgeon general considered a minority of youth occasionally vaping a public health emergency, but until just a few weeks ago thought the flu was a bigger threat than the coronavirus.