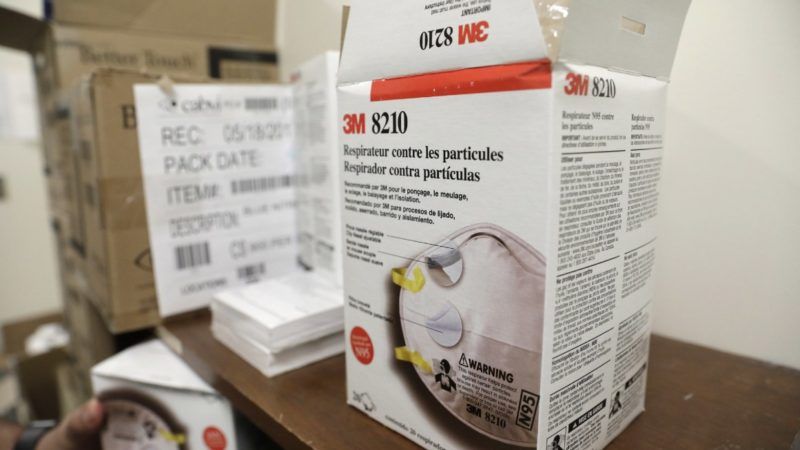 Over the weekend, the Federal Emergency Management Agency (FEMA) gave Puerto Rico and other territories the discretion to acquire personal protective equipment from non-U.S. sources. With governments at all levels adding so many restrictions in response to COVID-19, it is worth recognizing these rare, welcome cases of liberalization.

Previously, U.S. territories and the District of Columbia were obliged to purchase only U.S.-made personal protective equipment in accordance with the Buy American Act, a piece of protectionist legislation signed by Herbert Hoover on his last day in office in 1933. The relevant portion of the act reads:

Public use in this piece of legislation refers only to use by the federal government, the District of Columbia, Puerto Rico, American Samoa, and the Virgin Islands. So, while a state can buy masks and protective garments from anywhere, territories have been restricted to U.S. sources, exposing them to price hikes and shortages.

The restriction was mentioned during President Donald Trump's coronavirus update on Friday, and immediately raised some eyebrows. On Sunday, Puerto Rico's non-voting congressional representative, Jenniffer González, announced that FEMA would now allow Puerto Rico and other territories to buy personal protective equipment manufactured outside the U.S. It is not clear how much Puerto Rico will save from this waiver, but a Georgia hospital CEO recently said he was being charged $7 for face masks that previously cost $0.58. Time reported last month that China and Mexico are the two biggest suppliers of face masks, so limiting a buyer to just U.S. sources unnecessarily constrains flexibility at a time when availability is limited.

With Puerto Rico temporarily free from the Buy American restriction, one can only hope that further liberalization in other areas might occur. A particularly absurd restriction faced by Puerto Rico is the Jones Act which only allows U.S. ships to carry cargo to the island from the mainland. As a result, Puerto Rico faces inflated shipping costs which unnecessarily raise the prices of consumer goods on the island, where average incomes are half that of the poorest U.S. state, Mississippi. Trump temporarily exempted Puerto Rico from the Jones Act after it was devastated by Hurricane Maria in 2017, but it has remained in place since then.

Whatever one thinks about Puerto Rico's ultimate status—whether it should be a commonwealth, state, or independent nation—it should not be subject to discriminatory laws that inflate costs for individuals, businesses, or governments. Like another failed piece of Hoover-era legislation, the Smoot-Hawley Tariffs, the Buy American Act should be relegated to the dustbin of history. One can only hope the FEMA exemption is the first step toward such a reform.

It remains to be seen how much Puerto Rico will need to use the new discretion FEMA gave it. As of Monday, the island had only 31 confirmed coronavirus cases and two deaths, both of whom were elderly tourists. Because Puerto Rico has a warm, humid climate, it may have slower virus transmission than places with colder climates where the virus has spread quickly, like Wuhan, China, and New York City.

Marc Joffe is a Senior Policy Analyst at Reason Foundation.