Established makers of N95 masks are ramping up production as fast as they can. New manufacturers hoping to help meet demand are running into regulatory roadblocks. 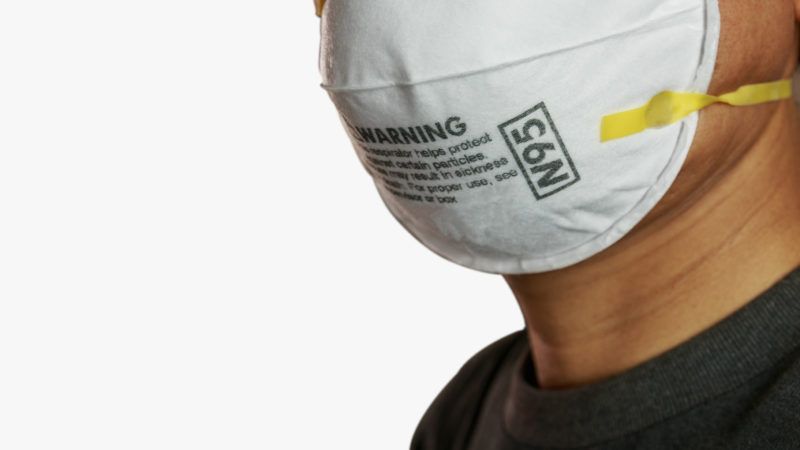 America is suffering from a shortage of almost everything it needs to combat the spread of COVID-19. Hospital beds, ventilators, gloves, and gowns are all in short supply.

That's particularly true of the N95 masks that help medical professionals avoid catching and spreading the virus as they tend to patients. The N95 designation refers to the ability of these masks to filter out 95 percent of airborne particles.

In early March, the U.S. Department of Health and Human Services (HHS) said that the country's stockpile of N95 masks was enough to meet about 1 percent of the three billion masks we would need during a true pandemic.

The pandemic is here now and so are the severe shortages.

The Centers for Disease Control and Prevention (CDC) is advising healthcare workers without masks to wear scarves and bandanas instead.

Large mask makers say they are doing everything to ramp up production. Meanwhile, the medical establishment and some in the media are urging the Trump administration to invoke Cold War-era emergency legislation to force private manufacturers to make even more.

At the same time, government regulations are stifling the ability of manufacturers to set up new N95 mask production facilities—handicapping the private sector's ability to respond to the current crisis.

That response includes the Open PPE Project, a group of about 15 engineers, technologists, and others who are attempting to set up their own N95 mask production facility, which they hope can then be used as a model for other companies and organizations to copy.

"We're trying to source materials, design N95 masks, and mass produce them," says Matt Chisholm, a spokesperson for the project. "On top of that, we're hopeful that our learning will allow us to put the information out there for other people and groups to do exactly what we're doing to mitigate the supply chain problems of there not being enough masks."

The Open PPE Project is in the process of setting up its own manufacturing line in Michigan. Chisholm says that they just secured a source of blown polypropylene, a common material used in making N95 mask filters.

Chisholm declined to give a rough date for when the Open PPE project would be capable of churning out masks. However long it does take, he says, getting the necessary government approvals could add up to three extra months.

The production of N95 masks is regulated by the CDC's National Institute for Occupational Safety and Health (NIOSH). Prospective makers of N95 masks must submit detailed written applications to NOISH, and send finished products to its Personal Protective Technology Laboratory for testing. NIOSH staff must also personally inspect new manufacturing sites before they're allowed to start pumping out masks.

Chisholm says regulators have told the Open PPE Project that getting agency approval could take anywhere from 45 to 90 days.

"The problem with that is that you have possibly 45 days to 90 days of product that could be used to save lives that is now sidelined," he says. Complicating things further, he continues, is that NOISH inspectors are under travel restrictions (as are most federal workers), potentially delaying approval even longer.

With shortages only likely to grow worse as the spread of COVID-19 accelerates, that means many healthcare workers are having to go without.

"About a week ago, we were told that we were going to get PPE-appropriate N95 masks, surgical masks, and gowns and gloves would be ordered," says one hospice worker who spoke with Reason last Friday. "But then I guess like everywhere supplies were not readily available."

This hospice worker, who asked not to be named because she doesn't have permission from her employer to speak to the press, says she was given a PPE bag containing a single N95 mask, plus gloves, a rubber gown, and foot coverings, all of which she was told to reuse.

"Pretty quickly you realize that's not sufficient, especially considering the population we serve," she says, noting that the elderly are particularly vulnerable to the COVID-19 virus. "I used to work in a hospital. I'm thinking of all this as disposable. You see one case and then you throw it all away. That realization hit pretty quickly."

Her story is being repeated across the country as doctors and nurses report being forced to reuse masks or go without them completely.

3M, one of the largest makers of N95 masks, says that it is producing 35 million respirators per month in the U.S. and that within 12 months it plans to double global production capacity to 2 billion masks a year. It also says it is exploring coalitions with other companies to expand mask production further.

Honeywell, another major mask manufacturer, claims it has more than doubled its mask production, according to The New York Times.

That's a lot of masks, but nowhere near enough to meet the current demands of the country's medical sector, let alone the demands of other essential workers and volunteers who are out in public right now, potentially dealing with sick people.

Last week, Congress passed a new law that allows mask producers to sell NIOSH-approved N95 masks to healthcare workers. Previously these masks also had to get separate approval from the Food and Drug Administration before they could be marketed and sold to medical staff.

That action will allow companies to ship more masks directly to the hospitals and clinics that need them the most. But it won't do anything to boost the aggregate number of masks being made.

Chisolm suggests that the Trump administration should go further by giving NIOSH more flexibility in approving new N95 makers. Allowing university labs to test prospective manufacturers' products would be one way to speed things up, he says.

Getting enough masks for everyone will require more companies and factories to get into the production game. That could mean GM pumping out masks instead of cars, or something more decentralized along the lines of what the Open PPE Project envisions.

Neither is going to happen as quickly as we need it to happen so long as the federal government takes months to approve new mask-making facilities.