Joe Biden Is No Moderate

Biden is a classic big-government liberal. 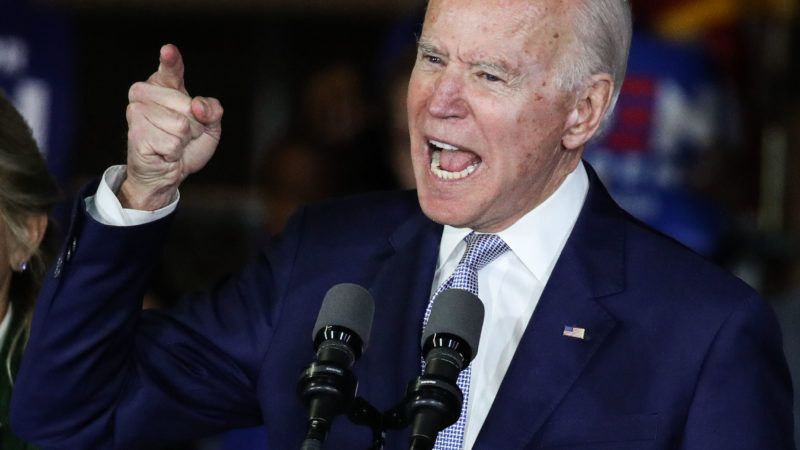 In the days leading up to the vote, the party's less progressive voters and candidates consolidated around Biden. Both Sen. Amy Klobuchar (D–Minn.) and former South Bend, Indiana, Mayor Pete Buttigieg, who had cast themselves as moderate alternatives to Sanders, ended their campaigns and endorsed Biden. Biden surged in national polling, and Democratic voters largely ignored former New York Mayor Michael Bloomberg, who spent hundreds of millions of his personal dollars attempting to portray himself as the candidate of moderate consensus. (So much for buying the presidency.)

In the end, however, Biden claimed that mantle. With Sen. Elizabeth Warren (D–Mass.) flailing and Rep. Tulsi Gabbard (D–Hawaii) barely registering, the Democratic primary is now a de facto two-man race, with Sanders the favorite of the socialist-friendly left and Biden representing the party's moderate, centrist voters. Even President Donald Trump, who has loudly criticized Democrats for appearing to embrace Sanders-style socialism, seems to essentially accept this frame.

But there is a problem with this view: Biden is a moderate compared to Sanders, but he is notably to the left of previous Democratic standard-bearers. To describe Biden as a moderate without this context is to ignore the specifics of his agenda and the leftward shift in Democratic Party politics it represents.

Consider Biden's health care plan. Although he has criticized Medicare for All, the fully government-run system favored by Sanders, Biden has proposed a significant expansion of the Affordable Care Act that his campaign estimates would cost $750 billion over a decade, nearly as much as the original bill signed by President Barack Obama. Although it would not nationalize the financing of health insurance, as the Sanders plan would, Biden's proposal would nevertheless set up a new, government-run insurance plan, expand eligibility for insurance subsidies well into the middle class, and make benefits available to people who can access coverage through their employer. If enacted, it would represent a major increase in government spending on health care and a substantial increase in the government's involvement in the health care system.

Beyond health care, Biden has proposed a $1.7 trillion climate plan that is similar in scope to many candidates on his left and a $750 billion education plan that would be used, among other things, to increase teacher salaries and provide expanded access to pre-kindergarten. He favors an assault weapons ban and other gun control measures, a national $15 minimum wage, and a raft of subsidies, loans, and other government-granted nudges designed to promote rural economies. Has proposed $3.4 trillion worth of tax hikes—more than double what former Secretary of State Hillary Clinton proposed when she ran in 2016.

To some extent, this just makes Joe Biden a Democrat in 2020, a successor to President Obama whose approach to policy could be summed up as, "Obama, but more."

That alone puts him to the left of previous presidential nominees. As a recent article in Vox put it, over the course of his campaign, Biden has "outlined a suite of policies that, taken on their own terms, would be the most ambitious governing agenda of any modern Democrat." If he won, he would "be the most progressive Democratic nominee in history."

Biden, in other words, would be the leftmost presidential nominee in memory even while representing the party's center. And that tells us something important—not just about Biden, but about the Democratic party.

Biden, arguably more than any other contemporary American politician, has long embodied the Democratic establishment consensus, from its tough-on-crime days in the 1990s to its wrong-about-Iraq days in the early 2000s to its technocratic economic policy gambles under Obama, when Biden played pivotal roles in the stimulus, the auto bailout, and high-stakes congressional budget deals. Biden is an avatar of the party's self-conception, the closest thing capitol-D Democrats have to a mascot.

Biden's leftward drift is thus the party's leftward shift. He isn't a Sanders-style socialist, but he is, as I wrote last year, a big-government liberal, a candidate whose current incarnation was shaped and informed by progressive politics, if not wholly captured by them. That he looks moderate relative to Sanders is just another sign of how the party center has moved. If, as now seems plausible, he bests Sanders in the primary, the party's current moderates will have won—but true moderation will have lost.