Tulsi Gabbard Wins a Delegate. The DNC Might Still Keep Her Off the Debate Stage.

The anti-war candidate's scoring of a delegate in American Samoa might earn her a spot on in the next Democratic debate. 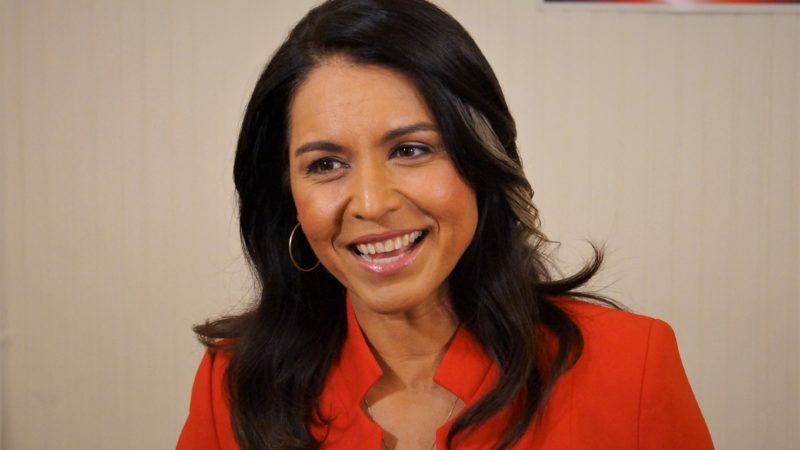 Gabbard scored 103 of the 351 votes cast in the American Samoa caucus. At just shy of 30 percent of the vote, that is enough to win her one of the island territory's six delegates.

That wasn't enough for Gabbard to win the caucus outright. Former Mayor Michael Bloomberg won 49.9 percent of the vote, giving him four delegates.

It's still a victory for Gabbard's long-shot presidential bid that's so far failed to expand outside an eclectic base of voters who have responded to the candidate's laser-like focus on opposing intervention abroad.

Winning a delegate has an added benefit for Gabbard. It might earn her a spot on the next Democratic debate.

If Tulsi Gabbard gets a delegate out of American Samoa, as it appears she has done, she will likely qualify for the next Democratic debate. We don't have new debate rules yet, but party has been inviting any candidate who gets a delegate.

Already, staffers for the Democratic National Committee are throwing cold water on that idea, saying the threshold for future debates will be raised.

We have two more debates-- of course the threshold will go up. By the time we have the March debate, almost 2,000 delegates will be allocated. The threshold will reflect where we are in the race, as it always has.

It would be a shame to keep Gabbard off the stage. Despite her failure to gain traction with voters, Gabbard's presence at the debates has allowed her to inject an anti-war message into conversations that have focused almost entirely on domestic issues.

If allowed onstage, she could even reprise her role as debate stage assassin, issuing devastating takedowns of other candidates. (It happened to Kamala Harris. It could happen to you, Michael Bloomberg.)