Oregon Tried To Silence This Engineer's Red Light Camera Research. Now Experts Say He Was Right All Along.

Mats Järlström's research never would have seen the light of day if the Oregon Board of Examiners for Engineering and Land Surveying had its way. 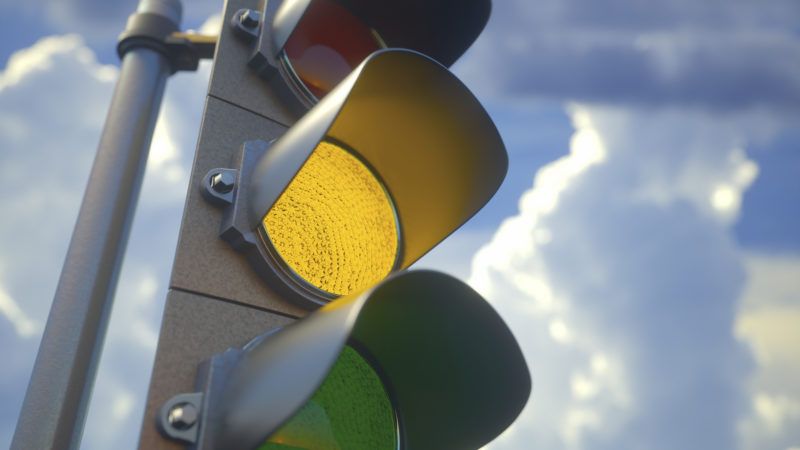 More than five years after Mats Järlström was threatened with fines for presenting data that challenged Oregon's red light camera program, his research has changed the way traffic engineers will calculate the timing of yellow lights.

The Institute of Traffic Engineers (ITE), an international group that publishes guidelines and best practices with an eye towards safety and mobility, published an update to its guidance for traffic signal timing last week. The new standard takes into account a wide variety of factors, including vehicle approach speeds, deceleration rates, intersection width, vehicle length, and more, according to an ITE statement announcing the changes. But Järlström's research—specifically, his "extended kinematic equation"—is cited as playing a key role in the ITE's updated yellow light timing formula.

That research never would have seen the light of day if the Oregon Board of Examiners for Engineering and Land Surveying had its way.

Järlström got on the board's bad side because he tried to challenge a traffic ticket given to his wife by a red light camera in Beaverton, Oregon, in 2013. He challenged the ticket by questioning the timing of the yellow lights at intersections where the cameras had been installed, using knowledge from his degree in electrical engineering and his experience working the Swedish Air Force and various technical jobs since immigrating to the United States in 1992. His research landed him in the media spotlight—in 2014, he presented his evidence on an episode of 60 Minutes—and earned him an invitation to present his findings to the ITE.

But the Oregon board said Järlström's research amounted to practicing engineering without a license. In a 2014 letter, the board told Järlström that even calling himself an "electronics engineer" and the use of the phrase "I am an engineer" were enough to "create violations" that could result in a $500 fine.

Järlström fought back. With the help of the Institute for Justice, a libertarian law firm that often challenges ridiculous licensing laws, Järlström took his case to federal court. The trial was a disaster for the licensing board, which was forced to concede that its attempt to silence Järlström "was not narrowly tailored to any compelling state interests." The board refunded the $500 fine, was prohibited from targeting Järlström again "for his speech about traffic lights and his description of himself as an engineer except in the context of professional or commercial speech," and got a public dressing-down from Judge Stacie F. Beckerman.

Beckerman's ruling ordered the Oregon board to restrict its policing of licensing issues exclusively to individuals who are working as professional engineers—that is, being hired to do engineering work—rather than simply practicing engineering skills. That seems like a necessary restriction, considering the board's history of investigating everyone from amateur engineers like Järlström to political candidates who promised to "engineer solutions" and even a Portland magazine that credited a local leader for being the engineer, metaphorically, of a new bridge project in the city.

Free to work without overzealous licensing boards breathing down his neck, Järlström has now made an important change to how traffic light timing will work. Specifically, his formula takes into account the time required for drivers to slow down if they are turning at an intersection. It has the potential to improve safety and to cut down on erroneous tickets at intersections with automated red light cameras like the one that nabbed Järlström's wife in 2013.

"It didn't take an engineering license to realize that the formula for traffic light timing was flawed," Järlström said in an Institute for Justice press release. "Hopefully this change will give everyone a little more time to get through an intersection safely."

So the next time you narrowly skip through an intersection before the light turns red, you can thank Järlström—and the attorneys and judges who stood up for his right to do math without a license.

"The First Amendment protects Americans' right to speak regardless of whether they are right or wrong," Sam Gedge, an Institute for Justice attorney, said in the press release. "In Mats's case, the ITE committee's decision suggests that he not only has a right to speak, but also, that he was right all along."