No matter how bad the outbreak might turn out to be, politicians will find a way to make it worse. 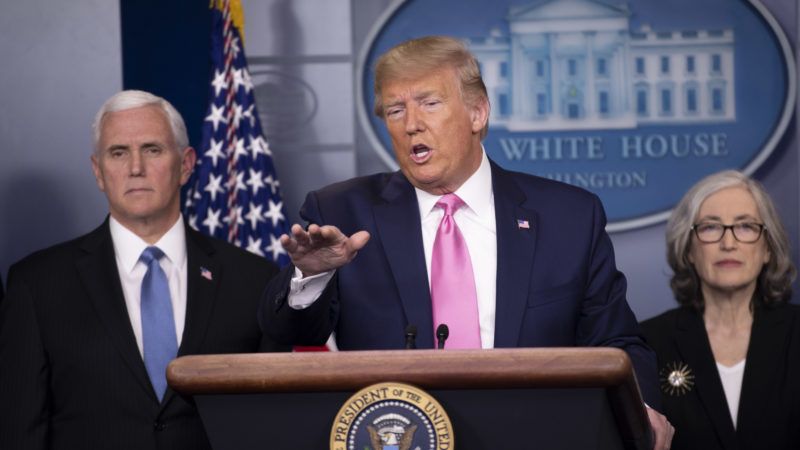 As politicians react to the coronavirus outbreak, more than a few seem to be following the old adage that you should never let a good crisis go to waste.

Much of President Donald Trump's briefing about the coronavirus on Wednesday night was incoherent, but he nevertheless managed to brag about how the stock market had risen after his election. More to the point, he repeatedly claimed that his administration had slowed the spread of the disease into America by cutting off air travel from China, and he suggested that further restrictions could be coming. That's a natural response from an administration whose signature non-coronavirus policies have included travel bans, immigration restrictions, and a general hostility to the free movement of goods and people across national borders.

But building walls doesn't stop the spread of disease. In fact, "travel restrictions can cause more harm than good by hindering info-sharing, medical supply chains and harming economies," advised Tedros Adhanom Ghebreyesus, secretary-general of the World Health Organization, earlier this month. Slowing the spread of disease allows more time for hospitals to prepare, but historical evidence shows that travel bans don't actually reduce the number of people who get sick during disease outbreaks.

China hawks are seizing on the outbreak too. Sen. Josh Hawley (R–Mo.) plans to introduce a bill requiring American medical device manufacturers to provide detailed information about their supply chains to the Food and Drug Administration. The agency would use that info to "assess the security of the U.S. medical product supply chain."

While it is presented as a way for the government to ensure America is prepared for a public health crisis, Hawley's bill is also a step toward greater central planning. It's not difficult to see how Hawley or Trump could, sometime in the future, claim that America's medical supply chain is too dependent on China—in the same way that Trump used a fictional "national security" risk to justify tariffs on steel and aluminum. Those tariffs haven't worked, but Hawley—who believes Trump's trade war is a long-term proposition—is barely disguising his attempt to lay the groundwork for more protectionism.

Democrats, too, are using the coronavirus as a new argument for old political objectives. Like defeating Trump, for example. While they offered little in the way of alternatives during Tuesday's primary debate, each of the candidates onstage were happy to blast the president for bungling the response to the coronavirus—even though it's still far too soon to conclude whether Trump's responses, or lack thereof, have made the outbreak worse in America.

Specifically, former Vice President Joe Biden has ripped the current administration for making "draconian cuts" to the National Institutes of Health (NIH) and the Centers for Disease Control and Prevention (CDC). The Obama administration "increased the budget of the CDC. We increased the NIH budget," Biden said Tuesday night. "He's wiped all that out. He cut the funding for the entire effort."

Except he didn't. Trump has proposed budget cuts for the CDC and NIH in each of his budgets since taking office, but Congress never approved those proposals. That's a pretty important distinction.

If the NIH and the CDC aren't adequately prepared to handle a disease outbreak, it's probably their own fault. There is always going to be a finite amount of money for any government agency to use, so it's best not to waste your shares. Yet the CDC spent $15 billion during the Obama administration to nudge Americans towards healthier eating habits, and millions more on the creation of a "Hollywood liaison office" with funds that were supposed to be used to counter the threat of bioterrorism. Sure, it's possible that more funding would result in greater preparedness to face new and deadly diseases. So would making better choices about the money you already have.

But that's not going to stop Democrats from using the coronavirus outbreak to argue for spending more money that we don't have—and heaven forbid we actually pay for emergency coronavirus funding with budget cuts elsewhere. Just like it won't stop Republicans from using the disease to push their anti-trade agenda. No matter how bad the outbreak might turn out to be, you can bet that politicians will find a way to make it worse.