While Trump Was Praising Modi for Religious Freedom, Modi-Supporting Hindus Slaughtered Muslims in the Streets

Trump's failure to speak out against Modi's reign of lawlessness and terror is an epic abdication of responsibility. 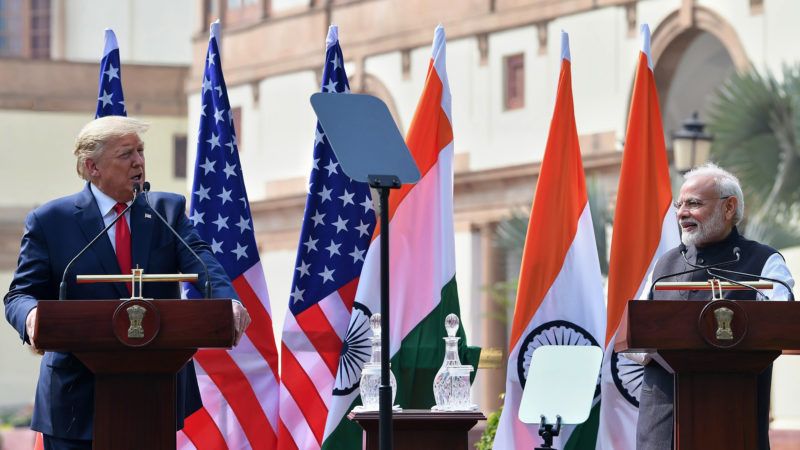 President Donald Trump landed in India this week just as a new round of deadly violence erupted in Delhi, the nation's capital. Hindu militants clashed with protesters agitating against Modi's "your papers please" Citizenship Amendment Act (CAA) whose aim is to strip an untold number of India's 140 million Muslims of their citizenship rights and perhaps throw them in detention camps that he is constructing around the country. The militants lobbed petrol bombs at Muslim homes in northeast Delhi, set a mosque on fire before hoisting a Hindu flag on it, and looted Muslim-owned shops. A sickening video shows four men dragging a bloodied and pleading Muslim man on the concrete road. Even as these horrors were unfolding, Trump and Indian Prime Minister Narendra Modi were holding talks merely miles away. So far, 27 people have been killed and hundreds injured.

The Delhi police—under Modi's control—initially did little to stop the mayhem or help the injured, forcing a local hospital to make an emergency petition to the court at 1:42 a.m. to order authorities to stop vandals from attacking ambulances as they transferred the more seriously injured victims to a better-equipped hospital.

Anti-Muslim violence has become a depressingly regular fact of life in India since Modi was first elected in 2014 and his supporters started thrashing and lynching Muslims suspected of consuming beef. But Modi's landslide re-election last summer has made things much worse. Hardly a day goes by when either the police or Hindu vigilantes don't go on a violent spree against Muslims or their supporters. In recent months, they have been targeting college campuses and brutally beating up students agitating against the Modi regime.

The current round of violence occurred after a prominent leader of Modi's party issued a thinly veiled call advocating violence to evict protesters from a site where they have been holding a monthslong 24/7 vigil to stop the CAA from going into effect. The same man had earlier in the month called for bullets to rain on the "traitors" protesting Modi's actions. Instead of disciplining him, the Modi government suspended the civil servant who complained against him.

President Barack Obama was no slouch when it came to serving as Modi's useful idiot. Far from speaking out against him, he feted and fawned over him.

Still, the situation in India has become so dire that most U.S. presidents would not have picked this moment to make a state visit to India or, if they went, they would have at least made India's deteriorating law and order situation and the growing abuse of human rights a major focus of their talks. Trump did none of those things.

He landed in Gujarat, Modi's home state, where 1,000 men, women, and children (mostly Muslim) were slaughtered over the course of a few days on Modi's watch in 2002. Then Trump whisked Melania to the Taj Mahal that some Hindu militants want to tear down along with other monuments and mosques built by Muslim rulers on sites where Hindu temples allegedly once stood. His final stop was in New Delhi where the duo, accompanied by Modi, made an obligatory pilgrimage to Mahatma Gandhi's shrine. Gandhi, who was assassinated by a Hindu militant for advocating a tolerant India where Muslims and other religious minorities were safe to practice their faith, would have died a hundred times over by now at what Modi was doing to his country. But Trump gave a speech where, after mangling the name of the most revered Hindu theologian, he made comments praising Modi as a champion of religious liberty. "He wants people to have religious freedom, and very strongly," said Trump.

"They have really worked hard on religious freedom," Trump added. "We talked about it for a long time and I really believe that's what he wants."

Why would Trump make such a farcical statement?

Here are some possible explanations:

Whatever the reason, it is safe to say Trump's abdication did not make India a better place. As the president of a country founded by those escaping religious persecution, he should have shown solidarity with India's persecuted religious minorities and those dying in the streets for their rights. Instead, he may have given Modi the green light for worse atrocities.