The Holocaust and its fallout can be tackled with humor. But this Amazon show fails at its aims. 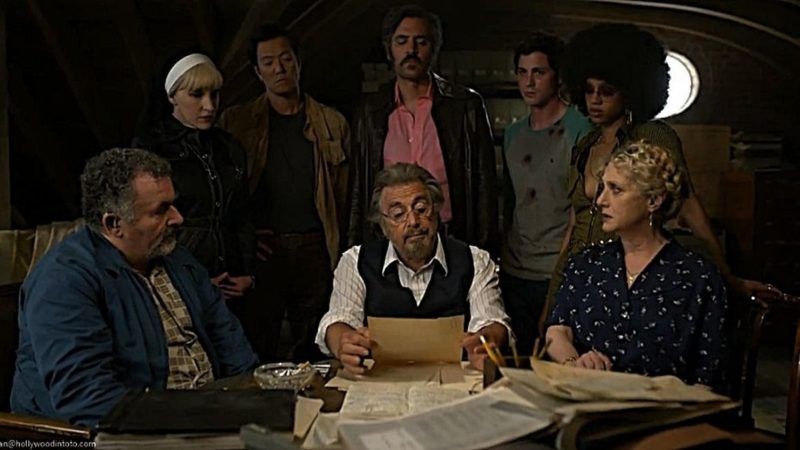 There's a scene early in Amazon Prime's new drama Hunters that offers a tidy summary of what's wrong with the show. Al Pacino, as millionaire Meyer Offerman, is trying persuade a reluctant young Jewish man to join his hand of Nazi-hunting superheroes. And, insists Offerman, the Talmud is wrong. "Living well is not the best revenge," he says. "You know what the best revenge is? Revenge."

So, let's tally up what's wrong with that line. First, it's barely comprehensible; like much of Pacino's dialogue, it's slurrily delivered through a Central European accent that's thicker than goulash. Second, "living well is the best revenge" isn't from the Talmud, but a 17th-century Welsh priest named George Herbert whose knowledge of Judaism was only slightly greater than his knowledge of Nazis, still 300 years in the future at that point. And finally, even without the false attribution (or maybe especially because of the false attribution) it's a glib and rather stupid invocation in an argument about the appropriate vengeance for 6 million murders.

That's Hunters: the waste of a heavyweight cast on a smarmy, smart-assed and sportively sadistic wallow in 1970s anti-Nazi paranoia. As violent and tasteless as any Quentin Tarantino project (and yes, Inglorious Basterds is definitely a point of reference) but without the underlying talent, Hunters' only likely achievement is triggering a wave of common prayers across religions and cultures for the continued good health of Pacino so that this mess isn't remembered as his last project.

Hunters is set in 1977, when—with the Cold War culturally and politically outré in the wake of Vietnam—Nazis retook center stage as the villains of the century. Feverish visions of secret Nazi armies and carefully nurtured Hitler clones topped both the box-office and best-seller charts. A wave of Nazisploitation films,  including a disturbing number concentrating on Third Reich sexual hinks, swept both the United States and Europe.

Thirty years after World War II, there were certainly real ex-Nazis hidden out around the world. But they were already old men whose ambitions were not erecting a Fourth Reich but keeping their prostates in check. They were mostly undone by heart attacks and strokes rather than professional Nazi hunters.

Though Hunters creator David Weil appears much too young to even have existed in the 1970s, much less remember them (his biographical material is strangely silent on the subject of age), his show seems firmly rooted in that era, from its Starsky & Hutch-style musical cues to the fourth-wall-busting gimmicks that seemed so funny back in the days of Kentucky Fried Movie. (The actors break into one scene with a PSA for Nazi-hunting tips like, look out for white guys with walk-in ovens.)

Coupled with the Jewish-frat-boy parameters of most of the humor—one character confides to another that he had a serious lust for the kid's recently murdered grandmother, he would have liked to have "mazeled her tov, gefilted her fish"—Hunters gives itself a garish comic-book sensibility that's screechily incompatible with an account of one of the 20th century's most abominable crimes. (Hang on to your emails about Stalin for when we discuss the Roseanne Barr remake of Dr. Zhivago.) I'm not saying that jokes about Hitler or World War II are innately beyond the pale, but they need to be shaped by genuine humor, not a sophomoric in-your-face impulse.

Hunters' obsession with juvenilia is unfortunate (seriously unfortunate—he introduces two of his Nazi-hunters as "a couple of Chabad-asses"; surely there's a constitutional violation there somewhere)  because the show's tri-cornered plot has the makings of a good suspense thriller.

On one side stands 19-year-old Jonah Heidelbaum (Logan Lerman, the Percy Jackson films), a bullied and rather whiney Jewish teenager who is surprised to learn after his grandmother's death that she was a principal in Meyer Offerman's band of Nazi hunters.

And somewhere in between is Millie Morris (Jerrika Hinton, Grey's Anatomy), a black, lesbian (get it? she double-empathizes with marginalized Jews) FBI agent who's assigned a throwaway investigation of a security-cleared NASA scientist who apparently died in an accidental slip in the shower. Miller discovers she was murdered, but maybe not by who you think. It's not clear who will be helped and who hindered by her investigation.

The Boys from Brazil, whatever its plausibility, was a lot of creepy good fun to watch. But then, it didn't have Gregory Peck and Laurence Olivier (or Steve Guttenberg) breaking into the action with a lip-synched dance to a lousy cover of "Stayin' Alive." Hunters does. You do the math.