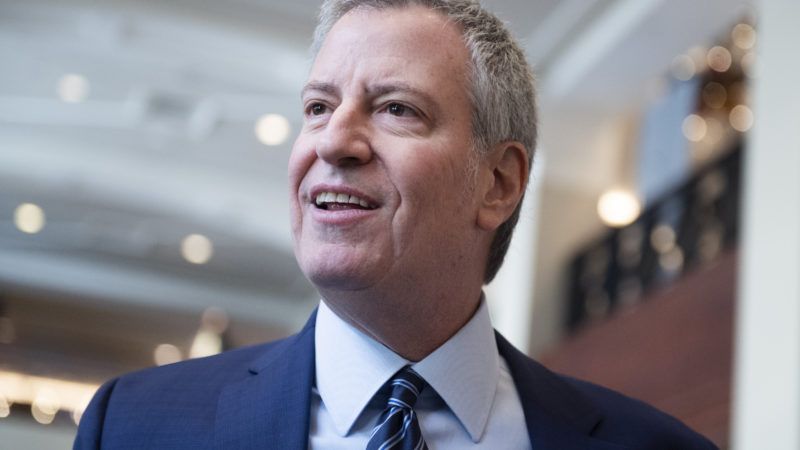 Imposing rent control on commercial properties is almost certainly illegal in New York City and would likely do little to fill vacant storefronts with thriving small businesses. Other than that, it's a great idea.

Last week, during his annual State of the City address, Mayor Bill de Blasio said that he would be forming a commission to investigate the legality of the controversial policy as part of his drive to save the city's mom-and-pop stores.

"I'm going to name a commission of people of different viewpoints and different expertise to come back to us once and for all this year with an answer, is there a legal way we can have commercial rent control in New York City?" said de Blasio. "That is the answer we need, and, if it's a yes, we should go to Albany and get it done in 2021."

Commercial rent control in New York City existed between 1945 and 1963, when a state-level law authorizing it expired. The idea of bringing it back has resurfaced every couple of decades, according to The City.

In 2018, City Councilmember Ydanis Rodriguez (D) introduced the Small Business Survival Act, which would have required landlords to renew a commercial tenant's lease for 10 years, and mandated the two parties submit to forced arbitration if they weren't able to negotiate new lease terms, including rent.

In November 2019, Councilmembers Stephen Levin and Brad Lander, both Democrats, introduced the Commercial Rent Stabilization Act, which would create a city panel that would set allowable rent increases for small retail, manufacturing, and office locations.

"There would be no incentive for a landlord to sit on an empty storefront and it would allow small businesses to compete," said Levin (D) to Curbed, articulating the view that vacant commercial properties are the result of speculating building owners holding out for higher rents.

That view is not generally supported by city government studies on New York City's retail vacancies.

An August 2019 report from the Department of City Planning found that this kind of speculative behavior might be behind some vacant commercial spaces in high-demand retail corridors, but not in most of the city.

"A rent bubble and a surge in high-priced property sales in Manhattan and some of Brooklyn's more established corridors may have encouraged retention of vacant space in anticipation of unrealistic rents," reads that report, while noting that this glut of empty space is starting to drive down commercial rents and vacancy rates.

Outside Manhattan, there was little evidence that commercial property owners were warehousing space in the hopes of attracting higher-paying tenants, that report notes. It also stressed that in addition to rents, the rise of e-commerce, the changing desirability of particular neighborhoods, regulation, and taxes all played a role in determining commercial vacancy rates.

Another September 2019 study from the city Comptroller's office was more sympathetic to the idea of rising rents being responsible for commercial vacancies, finding that a 1 percent increase in average retail rents was associated with 0.33 percent increase in vacant retail square footage.

The same report, however, found other regulatory factors were more impactful, particularly permitting delays. A 1 percent increase in the number of building alteration permits not approved within 30 days was associated with a 3.28 percent increase in vacant retail space, the study found.

"The average number of days it takes to get a liquor license is also a significant driver of retail vacancy," noted the comptroller's report.

Business groups have likewise stressed the multitude of factors that are making things difficult for businesses in the city.

"Data shows that retail vacancy rates are driven by rising property taxes, longer wait times for government approvals, e-commerce and various other factors," said the head of the Real Estate Board of New York, a trade association, in a November 2019 press release.

Borough-level Chamber of Commerce chapters similarly argued that the high costs of the minimum wage and mandated paid sick leave played a much bigger role in driving businesses out of the city than rent increases.

These practical considerations were enough for the de Blasio administration to come out against the Small Business Survival Act when it was first proposed.

As de Blasio noted in his speech last week, there are also major legal obstacles for the city to clear before establishing commercial rent control on its own initiative.

That means New York City leaders would likely have to convince state lawmakers to pass a commercial rent control bill if they wanted to see the policy stick.

Last year, the state legislature passed landmark legislation expanding rent control laws on apartments in New York City, suggesting there could be some appetite to do the same for commercial units.

On the other hand, establishing commercial rent controls when they don't already exist is a heavier lift than simply expanding existing residential rent regulations. The brief history of the new 2019 rent control law would also hopefully dissuade lawmakers from trying to replicate the policy.

Building sales of rent-regulated buildings have plummeted following the passage of the 2019 law, as have building owners' spending on renovations. Any commercial rent control policy could be expected to produce similar results.

In addition to studying commercial rent control, de Blasio has proposed a handful of other policies to assist small businesses. Some of these, like cutting small business fines and hiring more staff to help business owners secure permits more quickly, sound sensible enough.

The idea for a vacancy tax on commercial landlords—predicated as it is on the same idea that speculation is behind so many of the city's empty storefronts—is much less sensible. The mayor's proposal to invest $500 million in city pension funds in small businesses would be a huge, likely disastrous gamble.

City governments should consider reducing their own regulatory and tax burdens on tenants, commercial and residential, before reaching for blunt, destructive price control policies.