The democratic socialist and independent senator from Vermont is the Democratic Party's first socialist frontrunner. 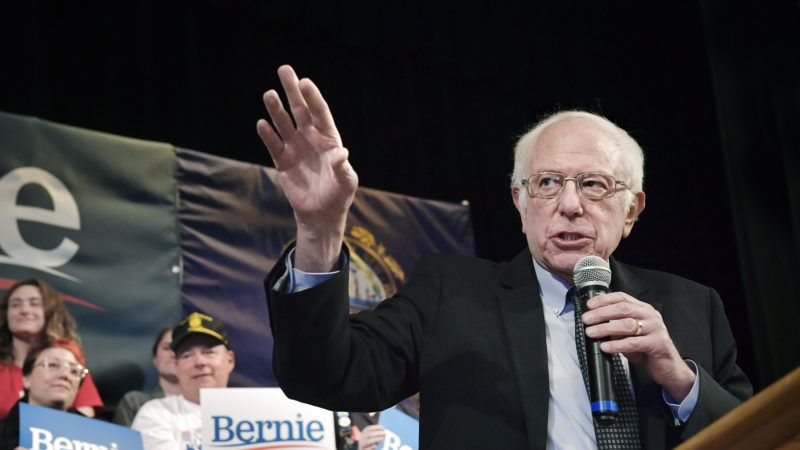 Sen. Bernie Sanders (I–Vt.) claimed a narrow victory in the New Hampshire Democratic presidential primary Tuesday night, cementing the 78-year-old democratic socialist's status as the de facto frontrunner for the party's nomination. It's a big victory for Sanders—and a pivotal moment in the Democratic Party's hard left turn toward socialism.

With 86 percent of precincts reporting, NBC News and Decision Desk HQ both projected that Sanders would win the state.

South Bend, Indiana, Mayor Pete Buttigieg was close on his heels, and Sen. Amy Klobuchar (D–Minn.) was expected to finish a respectable third. Meanwhile, Sen. Elizabeth Warren (D–Mass.) and former Vice President Joe Biden suffered complete collapses, though neither gave any indication that they would drop out. Indeed, for the time being, this is a relatively competitive five-way race.

New Hampshire uses proportional voting, meaning that its 24 delegates would be split fairly evenly among the top three finishers: 9 for Sanders, 9 for Buttigieg, and 6 for Klobuchar.

Still, there's no denying that Sanders is now the most likely eventual nominee. He has a large and steady base of support, and Warren is not currently a significant threat for the arch-progressive vote.

The moderate lane, on the other hand, is quite crowded. Biden is hoping to rebound in the upcoming South Carolina primary, where he polls well with the state's significant number of black voters. But the former vice president will eventually have to contend with former New York City Mayor Mike Bloomberg, who has a nearly unlimited pile of money to spend on campaign advertising.

In his remarks, Buttigieg congratulated Sanders on his "strong showing."

"I admired Sen. Sanders when I was a student," said Buttigieg. "I respect him greatly to this day."

The Sanders surge, though, is understandably concerning to the more moderate members of the Democratic coalition.

"The significance of Sanders's standing in the race goes far beyond the next round of primaries," wrote The Atlantic's Russell Berman. "In the modern history of American politics, no candidate so firmly planted on the left has been so well positioned to capture the nomination of the Democratic Party."

New York magazine's Jonathan Chait lamented that Biden's anemic performance had crippled the chances of any mainstream Democrat and handed the nomination to a comparatively weak nominee.

"If not for Biden, a mainstream liberal Democrat might well have begun to consolidate support of a party establishment that is not looking for a candidate who will embrace wildly unpopular policies and a wildly unpopular socialist label while emphasizing transformative economic change in the midst of the best economy in a generation," wrote Chait. "Incredibly, the sheer disarray of [Sanders'] opposition has made him the favorite."

Whether Sanders' support for fundamental changes to the economy and self-avowed socialism will actually render him a weak general election candidate remains to be seen. Socialism is broadly popular with younger voters. And in any case, there's some evidence that Sanders himself is popular with precisely the kind of independent, working-class, swing-state voters who handed the election to Donald Trump in 2016.