Andrew Yang, Who Wanted Libertarians in His Coalition and Opposed Cancel Culture, Exits the Democratic Race

The New Hampshire polls have closed, and the businessman and math advocate is no longer a candidate for president. 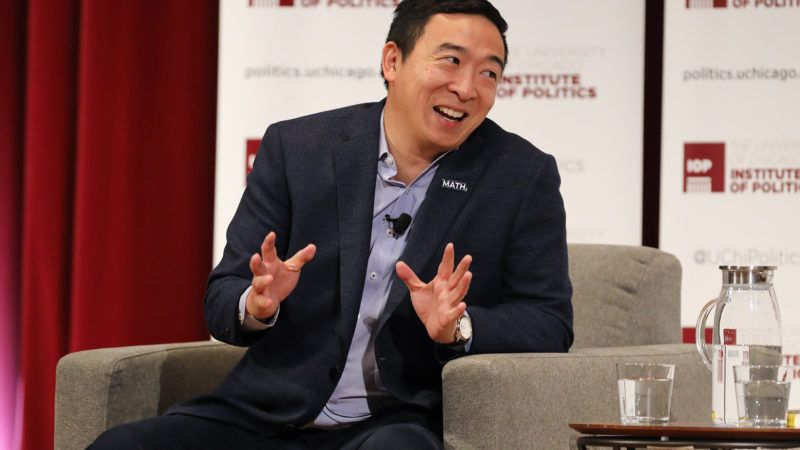 Businessman Andrew Yang, a longshot candidate for the Democratic Party's presidential nomination, has dropped out of the race in advance of what are expected to be disappointing results in the New Hampshire primary.

"I am a numbers guy," said Yang, according to The Washington Post. "I'm not going to be at a threshold where I get delegates, which makes sticking around not necessarily helpful or productive in terms of furthering the goals of this campaign."

Yang's candidacy was predominantly based on a specific proposal, akin to a universal basic income: Yang wanted to give every adult American $1,000 each month. He described his policy approach as "humanity first," and he wanted to use the powers of the federal government to ease the burdens on Americans whose short-term job prospects have suffered due to outsourcing and automation.

That was never a particularly libertarian agenda, but Yang's practical approach—find ways to help people who may have been hurt by capitalism, rather than destroy capitalism itself—nevertheless made him popular with a diverse range of people, including some libertarians. Former Libertarian Party vice presidential candidate Bill Weld recently cited Yang as his dream running mate. Yang and Rep. Tulsi Gabbard (D–Hawaii) have been the only Democratic candidates thus far this year to make any sort of explicit pitch to libertarians. (Indeed, they are the only two candidates on the New Hamphire ballot to plausibly demonstrate that they know what a libertarian is.)

"I believe that our country has become excessively punitive and vindictive about remarks that people find offensive or racist and that we need to try and move beyond that, if we can," Yang said. "Particularly in a case where the person is—in this case—a comedian whose words should be taken in a slightly different light."

Yang's friendly, upbeat approach made him extremely hard to dislike. If elections truly came down to Which candidate would you like to get a beer with?, he would undoubtedly have fared better.