Parts of Trump's expensive vanity project on the southern border have been blown over by stiff winds. Other sections will have massive holes in them, by design. 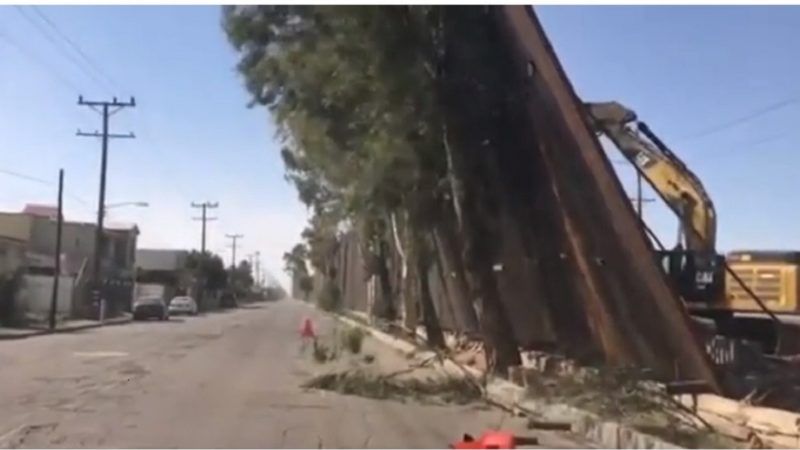 Here's your obvious metaphor of the week: On Wednesday morning, a section of President Donald Trump's expensive and "virtually impenetrable" border wall was literally blown over.

Police in Mexicali, Mexico, confirmed to KYMA that about 130 feet of newly constructed border wall "fell on the Mexico side of the border, landing on several trees." Evidently, the sections had not yet been set in a concrete foundation. The Mexican government still isn't paying for the wall, but at least Mexico's trees are helping to prop it up.

That's not the only loss Trump's wall has suffered this week in its ongoing battle against Mother Nature. On Friday, The Washington Post reported that other sections of the border wall have huge holes, by design, to prevent flash floods from damaging it. Sources familiar with the wall designs tell the Post that the structure will act like a giant sewer gate during those periodic downpours, allowing water to pass through but causing rocks, trees, and other debris carried by the water to slam into it. To avoid potential damage, there 30-foot floodgates will be built into the wall, and the floodgates will be left open for months at a time during the rainy season.

John Ladd, a cattle rancher who has one such floodgate on his property—built into an older section of border wall constructed in 2008—tells the Post that he's seen smugglers drive pick-up trucks through the openings.

What was that about "virtually impenetrable"?

As Ladd's experience with that older section of wall indicates, these problems aren't Trump-specific. They will afflict any attempt to build a physical barrier through the rugged and diverse geography of the U.S.-Mexico border.

These are well-known problems. As David Bier wrote in Reason three years ago:

A 1970 treaty requires that the floodplain of the Rio Grande remain open to both sides of the border. The Obama administration attempted to build fences along the river anyway, but the treaty and the river's floods forced the barrier to be placed so far into the interior of the United States that it has many holes to allow U.S. residents access to their property. These also provide an opportunity for border crossers.

At the same time, the fence can cause Mexico to receive too much water. Even when a fence has holes, which a wall would not, debris can turn the fence into a dam. Thanks to the barrier, some floods have fully covered the doors of Mexican buildings in Los Ebanos, across the Rio Grande, while producing little more than deep puddling on the U.S. side. The International Boundary and Water Commission that administers the treaty has rebuffed the Border Patrol's attempts to replicate this disaster in other areas of the Rio Grande Valley….

Border Patrol agents have told Fox News that a border wall would still "have to allow water to pass through, or the sheer force of raging water could damage its integrity, not to mention the legal rights of both the U.S. and Mexico to seasonal rains." In 2011, for example, a flood in Arizona washed away 40 feet of steel fence.

Mother Nature, it turns out, doesn't care about immigration policies or lines on maps.

If nature doesn't destroy the wall, human beings will. Smugglers have already been spotted cutting holes in new sections of the wall, and there's a long history of people gaining access to the United States by tunneling or catapulting their way in. More than 200 such tunnels discovered since 1990, and another one was found just this week near San Diego, California.

In a rare moment of admitting to reality, Trump has even conceded that "you can cut through any wall."

Exactly. That's why spending an estimated $60 billion on what amounts to little more than a presidential vanity project is so foolish.

Even if it didn't get cut through or knocked over or otherwise circumvented, the wall wouldn't do much to limit illegal immigration. Most illegal immigrants to the United States don't hop the border; they land at airports and then overstay their visas. It also wouldn't do much to stop the flow of drugs into the United States, because they're mostly smuggled in through checkpoints.

The best way to reduce illegal immigration is to let more people into the country legally. And if you want to deter drug smugglers, your best option is to reduce their profits by legalizing drugs.

But of course, the true purpose of Trump's border wall has little to do with drugs or immigrants. It's a political symbol more than anything: a way to appeal to border hawks, a neat hook for the crowds at his rallies to chant. What does it matter if the wall can't stand up to a gusty desert wind? The whole project has always been just a lot of hot air.