In Advisory Opinion, Florida Supreme Court Says State Can Require Ex-Felons To Pay Fines Before Having Their Voting Rights Restored 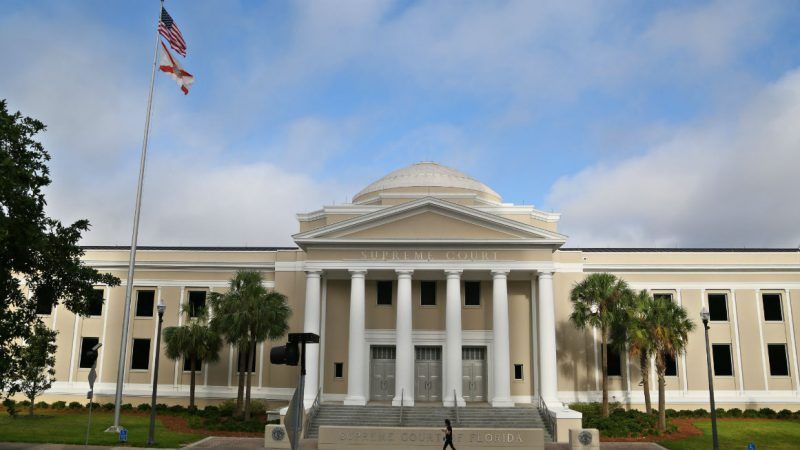 The Florida Supreme Court issued an advisory opinion last week condoning a state law that prohibits residents with felony convictions from voting if they owe outstanding fines and court fees. Opponents of the law say it undermines a ballot initiative that was slated to restore the voting rights of an estimated 1.4 million Floridians and that it is also unconstitutional.

Passed by a popular vote in November 2018, Amendment 4 changed the Florida constitution to restore the voting rights of former felons. "Complications emerged almost immediately," Reason's C.J. Ciaramella noted last year. "The language of Amendment 4 said that voting rights would be restored 'upon completion of all terms of sentence including parole or probation,' but it did not say whether 'all terms' included financial obligations imposed by courts."

The Republican-led state legislature chose to interpret "all terms of sentence" as including fines, restitution, and court fees associated with the felony conviction. Both chambers of the state legislature enshrined that interpretation in SB 7066, which Gov. Ron DeSantis (R) signed into law on June 28, 2019.

Almost immediately, civil liberties groups representing impoverished former felons sought an injunction against the state in federal court, claiming that SB 7066 essentially imposed a poll tax in violation of the 24th Amendment. In October 2019, Judge Robert Hinkle of the U.S. District Court for the Northern District of Florida issued a temporary injunction, writing that "each of these plaintiffs have a constitutional right to vote so long as the state's only reason for denying the vote is failure to pay an amount the plaintiff is genuinely unable to pay."

"The court's decision is clear: The right to vote cannot be denied to anyone based on their inability to pay," said Micah Kubic, executive director of the ACLU of Florida, in a statement. "The state must create a clear and unencumbered process that provides Florida's returning citizens the ability to vote."

In August 2019, while the ACLU suit was before Hinkle's court, Gov. DeSantis sent a letter to the Florida Supreme Court asking that it interpret the constitutionality of SB 7066 under Florida law. The Court issued an advisory opinion on January 16 in which it answered only the question of whether "all terms of sentence" includes "legal financial obligations" (LFOs) imposed by a sentencing court. In its advisory opinion, the Florida Supreme Court says both that LFOs are covered by the amendment's "terms of sentence language," and that the amendment's sponsors made that clear to the Court in 2017 during a hearing to determine whether Amendment 4 could be included on the 2018 ballot:

In its brief to this Court arguing in support of Amendment 4 being placed on the ballot, Amendment 4's sponsor, Floridians for a Fair Democracy (the Sponsor), asserted: "Specifically, the drafters intend that individuals with felony convictions, excluding those convicted of murder or a felony sexual offense, will automatically regain their right to vote upon fulfillment of all obligations imposed under their criminal sentence." [Emphasis used in the opinion]

During the oral argument, counsel for the Sponsor stated—consistent with the Sponsor's brief—that the operative language in Amendment 4 "means all matters—anything that a judge puts into a sentence." As noted in the Governor's letter, that oral argument involved discussion of LFOs—including fines, costs, and restitution—as well as the process for confirming payment of LFOs. Counsel for the Sponsor summed up by reiterating that Amendment 4 was intended to be "a restoration of voting rights under these specific conditions." It is beyond dispute that the Sponsor expressed the intention that "all terms of sentence" include all LFOs ordered by the sentencing judge.

"It is our opinion," the Florida Supreme Court concluded, "that the phrase 'all terms of sentence,' as used in article VI, section 4 [of the state Constitution], has an ordinary meaning that the voters would have understood to refer not only to durational periods but also to all [legal financial obligations] imposed in conjunction with an adjudication of guilt."

Reason's C.J. Ciaramella, who has covered the restoration effort, reported that felony offenders collectively owe hundreds of millions of dollars in fees and fines. The Florida Court system, which is funded almost entirely by fees and fines, has about "115 different types of fees and surcharges, the second-highest number in the country," per the Fines & Fees Justice Center.

In an interview with The Appeal, Miami-Dade public defender Carlos Martinez observed that many fees and fines are not listed on sentencing documents. He estimated that 90 percent of those facing outstanding fees and fines in his county were affected by the practice.

On Friday, the Cato Institute and the R Street Institute filed an amicus brief in the U.S. Court of Appeals for the 11th District arguing that "SB 7066, insofar as it excludes people who cannot afford to pay criminal court debt from participation in the democratic process, perhaps permanently, violates the bedrock guarantee of equal rights that every citizen enjoys."

Cato and R Street, who ask the U.S. Court of Appeals for the 11th District to uphold its injunction, write in their brief that "the unprecedented and growing imposition of fines, fees, court costs, and other financial obligations by state criminal courts has created an enormous class of citizens in debt to the government" and asks that the court "closely
scrutinize any law that purports to condition the ability to vote on payment of court
debt."

They add that "as a constitutional matter, this case falls squarely within the line of cases
beginning with Griffin v. Illinois, 351 U.S. 12 (1956), which have held that a state denies equal protection of the laws when it conditions a right or benefit solely on the ability to pay." While Florida argued that felons have no "fundamental right" to vote, Cato and R Street argue that "once the state chooses to re-enfranchise that class, it may not discriminate on the basis of wealth absent a compelling government interest and narrowly tailored means."