Tonight Will Be Bernie's Time in the Barrel 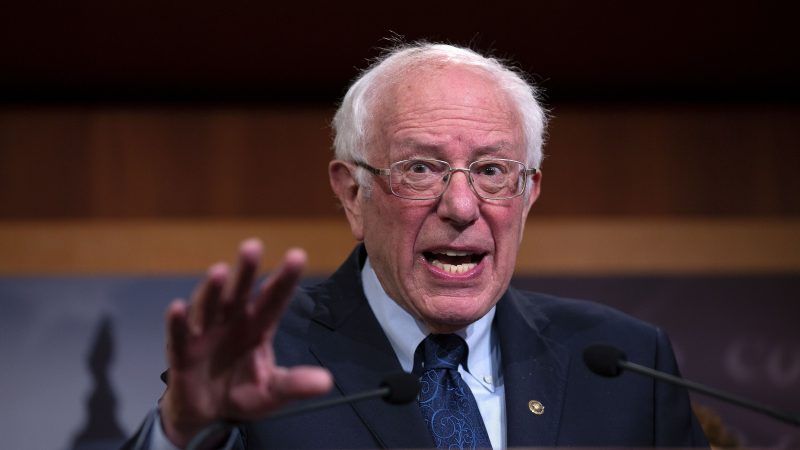 The drama at tonight's Democratic debate is going to be all about Sen. Bernie Sanders (I–Vt.), and not simply because he stands accused of electoral misogyny by rival progressive Sen. Elizabeth Warren (D–Mass.), who says the self-described socialist told her privately in 2018 that a "woman couldn't win" the presidency.

The bigger reason is that Sanders is emerging as a legitimate—and possibly even the leading—contender for the nomination of a party to which he doesn't even belong. Each debate so far has featured a breakout candidate who draws the collective fire of the field and barely makes it off the stage (Kamala Harris, we hardly knew ye!). Tonight will be Sanders' time in the barrel and it's hard to imagine him emerging unscathed.

According to some recent polls of Democratic voters, Sanders is leading all candidates in early-voting states Iowa and New Hampshire. With the exception of Bill Clinton in 1992, no Democrat since 1976, when the current primary system came online, has won his party's nomination without placing first in either Iowa or New Hampshire. With Sanders polling so well in both, he has to be taken super-seriously, despite trailing former Vice President Joe Biden by 10 points in national surveys of Democratic voters and also doing worse than Biden in polls versus Donald Trump (Biden beats the incumbent by an average of 4 percentage points, Sanders by 3 points).

Just as in 2016, Sanders' persistence and unapologetically hard-left policies are filling mainstream Democrats with anxiety about electability. This is a 78-year-old senator who had a heart attack last fall and yet according to all national polls remains solidly in second place among the dwindling field of Democratic hopefuls. Back in 2016, Sanders rained on Hillary Clinton's coronation as the first female president by refusing to concede until the Democratic National Convention, almost certainly helping to suppress enthusiasm for her in a general election that was ultimately decided by fewer than 80,000 votes. The Democratic National Committee's hacked emails plainly showed that the party establishment was secretly working to knee-cap Sanders and mainstream party members have never really forgiven Bernie and his supporters for forcing the matter.

Add to that the single-mindedness of Bernie supporters. As Margaret Carlson notes in The Daily Beast, a Quinnipiac Poll from last fall found that half of Sanders' supporters said they wouldn't vote for anyone else in the field if the former mayor of Burlington wasn't the candidate. In an election that is almost certainly going to be won by a candidate who pulls less than 50 percent of the popular vote, Democrats are rightly worried that Sanders fans will either stay home or vote third-party as a protest vote.

Expect Sanders' opponents to attack him tonight by forcing him to say exactly how he's going to pay for all the giveaways he promises to everyone. More than any other Democratic contender, Sanders has promised more free stuff if elected president—free college (and canceling of all student debt), free (or heavily subsidized) housing, and especially free health care (he is the popularizer of Medicare for All). Back in 2016, Sanders laid out plans to increase taxes by about one-third, an enormous amount that still wouldn't pay for an ever-growing list of programs.

But this time around, Sanders is generally hostile to discussing how to cover costs. "You're asking me to come up with an exact detailed plan of how every American—how much you're going to pay more in taxes, how much I'm going to pay," he said last fall as Elizabeth Warren finally laid out a plan to pay for her version of Medicare for All. "I don't think I have to do that right now."

Warren's plummet in the polls coincided exactly with her attempts to explain how she was going to afford all the free stuff she was promising, so don't expect Sanders to offer any details when it comes to footing the bill. But that's exactly how Biden, Warren, South Bend Mayor Pete Buttigieg, Sen. Amy Klobuchar (D–Minn.), and billionaire environmentalist Tom Steyer will work Sanders over. And in so doing, they will reveal not simply his lack of seriousness but their own party's larger inability to imagine a government that is actually affordable. As Reason's Peter Suderman noted in December, arguably the most-moderate Democratic candidate, Joe Biden, is already calling for tax increases that are twice as large as what Hillary Clinton proposed just four years ago. Expect him especially to call out Sanders for irresponsible spending in a way that simultaneously reminds people that Democrats want to raise taxes while clawing back some of the freebies proposed by the senator.

All of this is a gift to Donald Trump, who has unashamedly presided over the return of trillion-dollar deficits. In the general election, he will focus on his tax cuts and steer the conversation toward the idea that Democrats are the spendthrift party that will also choke off economic growth. He won't be correct, exactly, as the GOP has played a signal role in busting the federal budget for the entirety of the 21st century. But such rhetoric almost certainly will be effective, whoever manages to win the Democratic nomination.