Should Wall Street Be Worried by Potential Sanders, Warren Presidencies? 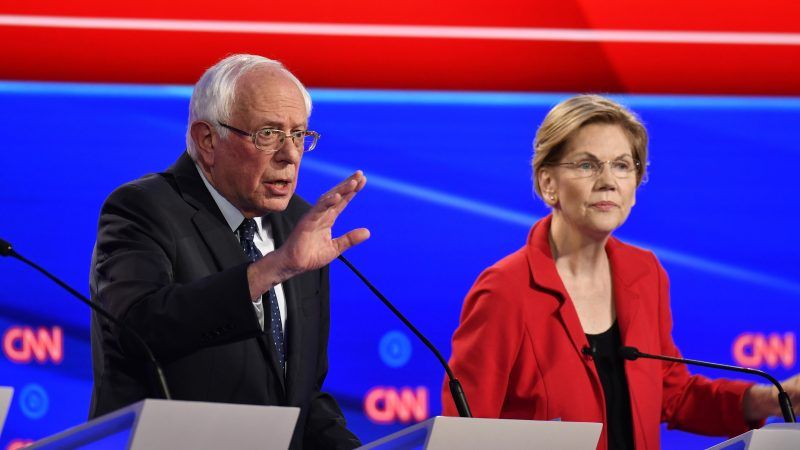 With Sen. Bernie Sanders (I–Vt.) currently leading Democratic presidential polls in Iowa and New Hampshire—and with caucuses and the primary in those states less than a month away—it's time to start paying attention to what a Sanders presidency would mean for the stock market.

Several prominent money managers have warned that a victory by Sanders or his ideological ally, Sen. Elizabeth Warren (D–Mass.), would bring a decline of between 25 percent and 40 percent in the value of U.S. stocks. That would destroy trillions of dollars in wealth of U.S. households. The resulting negative effect on everything from tax revenues to employment would affect even families without much saved in the stock market, and, ironically, could make Sanders' agenda of government expansion much harder to achieve.

"If Bernie Sanders becomes president, I think stock prices should be 30 percent to 40 percent lower than they are now," Stanley Druckenmiller told CNBC last year. Forbes says Druckenmiller has about $4.7 billion accumulated through a lifetime of managing money. It's worth paying attention to his warning.

"The biggest risk for 2020 is the presidential election," the New York Times quotes a JPMorgan researcher, Nikolaos Panigirtzoglou, as saying.

Another billionaire hedge fund manager, Paul Tudor Jones, said his firm's employees think the value of the large stocks in the Standard and Poor's 500 Index would decline by 25 percent if Senator Warren is elected. "Her policies would—assuming they were implemented—probably give you something like that," he said, according to CNBC. "As an investor, you have to have a view on the election because the outcomes are so extreme."

Another billionaire hedge fund manager, Marc Lasry, made a similar call, telling CNBC about Senator Warren, "I think if she's the president, market's down 20 percent, 30 percent."

Doubtless some Warren and Sanders voters would see that sort of wealth destruction as good news. Since much of the stock market wealth is in the hands of rich people, a big stock market decline would reduce the inequality that so upsets left-wing Democrats. Sanders and Warren won't even have to wait for Congress to enact their "wealth tax"; they can make trillions of dollars disappear by means of intimidation, not legislation.

But the last time the stock market took that big a tumble was in 2008. If that's too long ago for you to remember, allow me to remind you: it was miserable. Businesses and state and local governments laid off workers, tax receipts tumbled, the real estate market tanked, unemployment rose. Instead of focusing on the problem that other people were too rich ("inequality"), people were worried about finding a job or about having their house foreclosed on.

In a roaring economy, it's easier to find money for spending on health care and education of the sort Sanders and Warren advocate. In a sagging economy, government spending goes up automatically on items such as food stamps and unemployment benefits, while income-tax revenues decline. In that environment, vast government expansion becomes less tenable. Obama managed it with the "stimulus" and ObamaCare during the post-2008 downturn, but he paid a significant political price, losing control of the House of Representatives. Likewise, President Roosevelt responded to a stock market crash with a vast expansion of government.

President Sanders, or Warren, would probably try a similar move, arguing that the same government programs they had proposed during the booming Trump economy are now more essential than ever as a way of cushioning the blow in a bad economy created by the expectation of their policies. The policy prescription—more big government—is the same. It's just the rationale that shifts, depending on whether the economy is soaring or sagging.

All of which is to say that there's probably some basis to the idea that a Sanders or Warren administration would be bad for the market. Democrats will write in to claim that stocks do better in Democratic administrations. And it's certainly possible that the market is driven over the long or even medium term mainly by forces other than presidents, who are constrained by Congress and who only stick around for four or eight years at a time.

But you don't have to be a Wall Street genius to understand that the Sanders-Warren agenda—higher taxes, increased regulation, more government control—means the share in future profits represented by a share of stock will be worth less.