More Holes in the 'Imminent Threat' Story on Soleimani 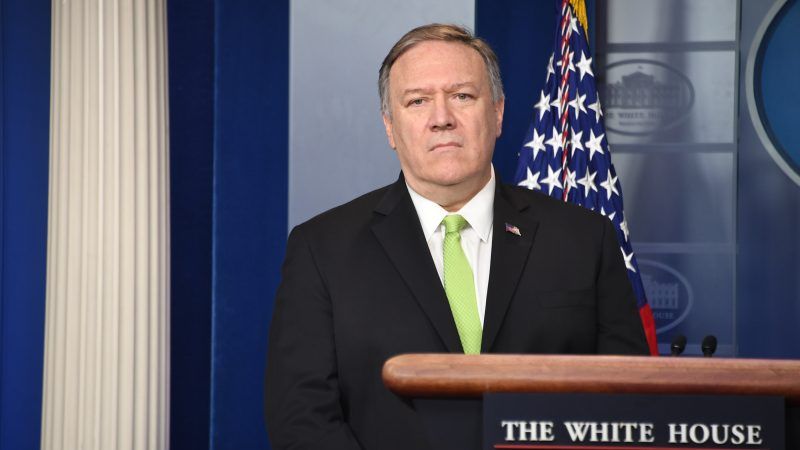 NBC is reporting that President Donald Trump was mulling the hit on Iranian Maj. Gen. Qassem Soleimani seven months ago, with war hawks such as John Bolton urging him to go for it. This further erodes the administration's claim that the assassination was done to stop an "imminent" attack on U.S. lives.

"According to five current and senior administration officials," NBC reports, Trump gave the order in June 2019, "with the condition that Trump would have final signoff on any specific operation to kill Soleimani." Trump said that signoff would come if any Americans were killed, their sources said, which "explains why assassinating Soleimani was on the menu of options that the military presented to Trump two weeks ago for responding to an attack by Iranian proxies in Iraq." That proxy attack killed a U.S. contractor.

The strike was carried out on January 3. Secretary of State Mike Pompeo quickly and repeatedly attributed it not to retribution but to an alleged imminent threat to dozens (sometimes "hundreds") of American lives.

The killing looked like something former National Security Advisor John Bolton would have hatced, but Bolton has been gone since September. Now it seems that Bolton's imprint may have been on this operation after all. From NBC:

After Iran shot down a U.S. drone in June, John Bolton, Trump's national security adviser at the time, urged Trump to retaliate by signing off on an operation to kill Soleimani, officials said. Secretary of State Mike Pompeo also wanted Trump to authorize the assassination, officials said.

Yesterday, Defense Secretary Mark Esper told Face the Nation that he knew of no "specific evidence" to support the claim that Iran was planning embassy attacks. Rep. Justin Amash (I–Mich.) has been blasting the Trump administration for continuing to push this story:

The administration didn't present evidence to Congress regarding even one embassy. The four embassies claim seems to be totally made up. And they have never presented evidence of imminence—a necessary condition to act without congressional approval—with respect to any of this. https://t.co/Eg0vaCnqFd

Anti-Catholic law in Montana comes to Supreme Court. When it considers Espinoza v. Montana Department of Revenue later this month, the U.S. Supreme Court "has the opportunity to do more than just settle the fate of one controversial tax credit; it could also junk Montana's Blaine Amendment, finding it in violation of the Constitution's religious-freedom and equal-protection clauses," writes Nick Sibilla at The Atlantic. "In doing so, it would set a strong precedent against any law born of bigotry."

The case concerns "a modest tax-credit scholarship program in Montana," notes Sibilla, but it "could have major ramifications for educational-choice programs across America, which help nearly half a million students attend private schools."

Times editorial board lays out plans to "fortify" the FDA. On Sunday, the New York Times editorial board praised the Food and Drug Administration while worrying over its (lack of) leadership and admitting that it often fails. Its proposed solutions for "fortifying" the agency? Giving it even more power, of course. (Sigh.) To fix the FDA's flaws, the paper claims, "the agency needs to be made stronger, not weaker."

"Fortunately," they write, "options for fortifying the F.D.A. abound":

For instance, laws that would make it easier for regulators to police the cosmetics industry and to hold medical device companies to account have been floating through Congress for years. A group of former F.D.A. commissioners last year proposed an even bolder fix: Restore the agency's autonomy by extracting it from the Department of Health and Human Services. The F.D.A.'s decisions used to be final, but for decades now they have been subject to layers of political interference. Making the agency independent, as the Federal Reserve and the Social Security Administration are, could help reverse that trend.

The Libertarian Party hosts a series of primaries and caucuses where non-binding votes are cast, indicating a state party's preference for its presidential candidate. These preferences are not binding and delegates who are sent to the national convention can vote for whichever candidate they prefer. New Hampshire had the first primary. This self-funded presidential preference primary was actually conducted by mail, with results announced on January 11….

So the voting of Vermin Supreme was a statement of preference, but it does not bind the delegates when they vote at the national convention on May 21-25, 2020 in Austin, Texas.

Presumably, it's a picture from earlier last week, when it did snow, although the conspiracy theorists of Twitter are having a field day:

I don't want to sound like Alex Jones here but is this some sort of secret communication? Racking my brain to make any sort of sense of this. It nearly hit 70 degrees in DC today. https://t.co/aLwOz5HKVD