How Truth Became a Casualty of the War on Smoking

Jacob Sullum | From the February 2020 issue 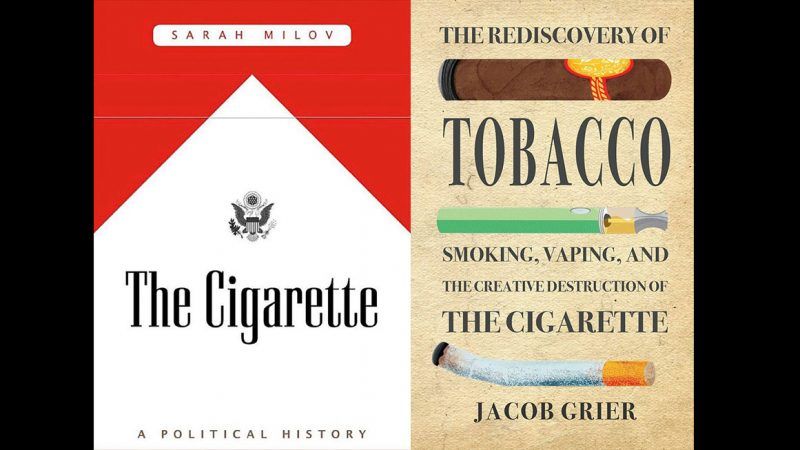 The Rediscovery of Tobacco: Smoking, Vaping, and the Creative Destruction of the Cigarette, by Jacob Grier, Kindle Direct, 267 pages, $14.99

When Clara Gouin started running the Group Against Smokers' Pollution (GASP) out of her College Park, Maryland, living room in 1971, she was rebelling against social norms she deemed oppressive. "Gouin was a housewife and the mother of two daughters, the youngest of whom had an allergy to smoke," University of Virginia historian Sarah Milov writes in The Cigarette: A Political History. "The child's reaction to cigarettes was so severe that it prevented the family from going out to eat. Even worse than being restricted in public was the expectation that nonsmokers had to accommodate smoking guests in their own homes. Ashtrays in the homes of nonsmokers were monuments to smokers' supremacy. 'What doormats we were!' Gouin recalled thinking as she lay awake one night contemplating nonsmokers' powerlessness."

The understandable grievances of put-upon nonsmokers like Gouin gave birth to a movement that ultimately banished smokers from nearly every place they might want to light up. In many jurisdictions, that includes outdoor spaces. Sometimes it even includes smokers' own homes. Half a century after Gouin founded GASP, as Jacob Grier shows in The Rediscovery of Tobacco, the dwindling minority of cigarette smokers (15 percent of American adults in 2019, per Gallup, down from 45 percent in 1954) is the group with the more plausible complaint of oppression.

Grier—a writer, bartender, and cocktail consultant who enjoys the occasional cigar and pipe but says humanity would have been far better off if the mass-produced cigarette had never been invented—is by no means calling for a return to the situation that Gouin found intolerable. "The proper path," he says, "lies somewhere between ignorant pleasure and outright prohibition."

Grier argues, for example, that state and local governments should allow smoking among consenting adults in certain contexts, such as bars and restaurants that want to offer the option. Even that modest plea is bound to provoke the ire of activists who will settle for nothing less than the "smoke-free society" that C. Everett Koop, surgeon general during the Reagan administration, deemed achievable "by the year 2000." Unlike Milov, who tells the story of the anti-smoking movement mainly as a triumph of public-spirited citizens over conniving capitalists, Grier details the costs of that victory, including unjustified coercion, politicized science, and a fanatical refusal to admit that different kinds of nicotine consumption pose different levels of risk.

Even Milov acknowledges that the push for smoking bans sometimes got ahead of the science concerning the dangers of secondhand smoke. Koop's "rather sweeping statements" on the subject in the preface to his 1986 report The Health Consequences of Involuntary Smoking, she notes, "gave way in the subsequent 300 pages to much more hedged and nuanced interpretations of scientific studies." At that point, she says, secondhand smoke was "an issue where actual uncertainty existed, where scientists of good faith disagreed on the magnitude of the risk if not on the existence of risk itself."

Although Milov leaves readers with the impression that the uncertainty was subsequently eliminated, Grier shows that the scientific case against secondhand smoke has never been as strong as activists and public health officials claimed. He notes a telling 2013 article published in the Journal of the National Cancer Institute under the headline "No Clear Link Between Passive Smoking and Lung Cancer." The article described a large prospective study of 76,000 women that "confirmed a strong association between cigarette smoking and lung cancer but found no link between the disease and secondhand smoke." While "we don't want people to conclude that passive smoking has no effect on lung cancer," one of the researchers said, "this analysis doesn't tell us what the risk is, or even if there is a risk."

An expert quoted by the journal, University of Chicago oncologist Jyoti Patel, "said the findings were not new," adding: "Passive smoking has many downstream health effects—asthma, upper respiratory infections, other pulmonary diseases, cardiovascular disease—but only borderline increased risk of lung cancer. The strongest reason to avoid passive cigarette smoke is to change societal behavior: to not live in a society where smoking is a norm." Another expert, Medical University of South Carolina internist Gerard Silvestri, said "it's only the heaviest exposure that produces the risk." He added that we "kind of knew that before."

Those measured remarks, published by an eminent journal, came after decades when activists successfully lobbied for smoking bans by implying that the slightest whiff of tobacco smoke just might kill you, emphasizing the lung cancer risk in particular. The overriding goal, as Patel acknowledged, was not to dispense scientifically informed health advice but to denormalize smoking.

Having won that war, tobacco controllers can afford to speak a bit more candidly about the hazards of secondhand smoke. "In previous decades," Grier notes, "any researcher caught saying such a thing would have been hounded relentlessly by their peers and scrutinized for the most tenuous ties to Big Tobacco. What changed? Not the science, but the politics."

Some activists, such as Stanton Glantz, a co-founder of Americans for Nonsmokers' Rights who now directs the Center for Tobacco Control Research and Education at the University of California, San Francisco, went beyond downplaying the subtleties of the scientific evidence. Since 2003, Glantz has been promoting the highly implausible claim that bans on smoking in bars and restaurants cause immediate and dramatic reductions in heart attacks—as large as 60 percent, according to his initial report. While substantial post-ban drops can be observed in small, cherry-picked cities, those putative effects disappear when researchers look at large populations or large numbers of jurisdictions and take into account pre-existing trends.

The claim that smoking bans instantly and conspicuously reduce heart attacks was nevertheless parroted by advocates of such laws, credulously reported by news outlets, and even endorsed by a 2009 Institute of Medicine report, which omitted one of the most important countervailing studies. "The myth that banning smoking in bars and restaurants will bring about astounding reductions in the rate of heart attacks is now dead and buried in the scientific literature," Grier observes, "but for years the false promise of heart miracles has influenced public debate."

Grier also considers attempts to generate alarm about "thirdhand smoke": tobacco combustion residue lurking in rooms where people have smoked or on the clothing and bodies of smokers themselves. If "fear of secondhand smoke alienated smokers by forcing them to step outside," he writes, "fear of thirdhand smoke makes them untouchable pariahs." Such fearmongering "exposes the extent to which the anti-smoking movement has abandoned scientific credibility," he says. "Prominent anti-tobacco researchers…will promote any finding that helps delegitimize tobacco use, no matter how far-fetched or unsupported by the evidence."

"Driven by an almost puritanical inability to accept the fact that a person could obtain pleasure from nicotine without it killing them," Siegel says in a blog post that Grier quotes, "we have made the demonization of vaping the solitary goal of the movement, at the direct expense of what I always believed was our primary goal: to make smoking history." For dissidents like Siegel, it's clear that vaping—which is indisputably far less dangerous than smoking—should be embraced as a public health boon by people who say they want to reduce the death and disease caused by cigarettes.

Grier, who disdains cigarettes but would like to encourage an appreciation of high-quality tobacco products akin to the "slow food," craft cocktail, and microbrew movements, does not exactly share Siegel's goal of making smoking history. But both critics agree that activists have gone too far in stigmatizing smokers, sacrificing truth on the altar of ideology, and reflexively tarring anyone who disagrees with them as shills for Big Tobacco. The anti-smoking establishment's generally hostile reaction to e-cigarettes, which superficially resemble the real thing but contain no tobacco and do not burn anything, is a sure sign that something has gone terribly wrong with a movement that once claimed to champion science.