Facts Still Matter, but They Don't Change Many Voters' Minds

Fact-checking reduced voter misperceptions but had no discernible effects on their candidate preferences. 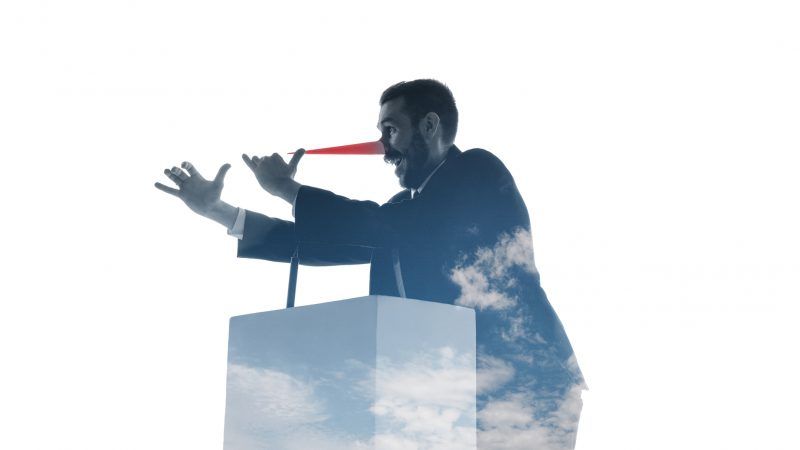 All politicians lie, but some lie a lot more than others. (Volodymyr Melnyk/Dreamstime)

Good news: Facts still matter. Or at least they do in political science experiments.

In the experiments, participants looked at various claims floating around the political world, including the assertions that solar power employs more people than does the oil industry (asserted by Hillary Clinton), that immigrants commit crimes disproportionately to native-borns (declared by Donald Trump), and that more violence is being committed against the police (alleged by Ted Cruz). As it happens, all of those claims are false, and the experiments showed that people's views tend to become more accurate after reading information correcting the politicians' specious claims. Hooray, right?

Not so fast. Yet more research finds that facts don't seem to matter much when it comes to people's attitudes about the politicians they favor, at least in the context of a hotly contested presidential campaign.

In a forthcoming paper, University of Michigan political scientist Brendan Nyhan and his colleagues sought to answer a key question: When presented with a realistic fact-check of a false statement made by a candidate, will people not only revise their factual beliefs but also alter their attitudes toward the candidate?

The researchers looked at the effects of journalistic fact-checks of two claims made by Donald Trump, one during his convention speech and the other during the first general election debate. The surveys they drew on were conducted during the 2016 U.S. presidential campaign. This means that neither the researchers collecting the data nor the survey participants knew at the time who the winner of the 2016 campaign would be.

In his convention speech, Trump claimed America was under assault from a dangerous and rising tide of violent crime. As evidence, an annotated speech released by the campaign cites (among other things) a January 2016 Washington Post story that reported a 17 percent increase in homicides in the country's 50 largest cities. Yet when Trump gave his speech, the most recent FBI data (from 2014) said the national murder rate was at a record low of 4.5 per 100,000 people. It subsequently ticked up in 2016 to what it was in 2008 (5.4 per 100,000), then dropped back in 2018 to where it was in 2009 (5.0 per 100,000).

The fact-check used in the study states, "According to FBI's Bureau of Justice Statistics, the violent crime rate has fallen dramatically and consistently over time. According to their estimates, the homicide rate in the U.S. in 2015 was half that recorded in 1991."

The second Trump claim involved job losses in Michigan and Ohio during the first presidential debate. The candidate said: "Thousands of jobs [are] leaving Michigan, leaving Ohio. They're all leaving." That turns out to have been old news. In 2016, the Bureau of Labor Statistics reported that in the past year Ohio had gained 78,300 jobs and Michigan had gained 75,800; their respective unemployment rates stood at 4.7 and 4.9 percent. (The national unemployment rate in August 2016 was 4.9 percent.)

The fact-check for this claims states: "In fact, according to the Bureau of Labor Statistics, unemployment has fallen in both Michigan and Ohio. Both states each saw 70,000 new jobs over the last year."

In the first survey, more than 4,000 participants read a story citing Trump's claim about a rising crime wave. Some read an uncorrected story, another group read a story with the correction included, and another group read the correction along with a disparagement of the accuracy of FBI statistics from Trump campaign manager Paul Manafort, who claimed the FBI statistics are suspect because the agency had failed to charge Clinton over the private email server scandal.

"Though Trump's supporters were more likely than Clinton's to believe that crime had increased or not declined significantly over the previous ten years, corrective information reduced misperceptions among supporters of both candidates," report the researchers. By how much? After reading the story with the correction, the perceived level of crime dropped on a five-point scale from an average of 4.17 to 3.31 for Trump voters and from an average of 3.3 to 2.7 for Clinton voters. The views of both Trump and Clinton voters about crime rates became more accurate when presented with factual information.

Among people who read the story that included Manafort's comments, the perceived level of crime dropped from 4.17 to only 3.62 among Trump supporters, from 3.3 to 2.9 for Clinton voters. This suggests that whataboutism can work.

But none of this changed how people viewed the candidate. The participants were asked to rate him on a five-point favorability/unfavorability scale before and after reading the fact-check. The researchers found "no significant effects of the fact-check on favorability toward Trump regardless of respondents' candidate preference." They conclude: "Fact-checks can still spur people to hold more factually accurate beliefs. However, these changes in belief accuracy do not seem to lead to corresponding changes in attitudes toward the candidate being fact-checked."

And the second claim? Around 1,500 participants sorted into Trump and Clinton supporters were asked in advance to watch the first presidential debate and to respond to a survey that closed at noon the day after. The participants were also surveyed five days later. The researchers again found that "fact-checking reduced misperceptions but had no discernible effects on participants' candidate preferences, including supporters of the candidate who had been fact-checked."

The authors acknowledge some limitations on their research:

First, we did not test a fact-check of a Clinton misstatement and cannot evaluate how her supporters would have reacted. Second, Trump was infamous for extreme exaggerations and misstatements, which may have made some respondents receptive to fact-checking but also prepared his supporters to rationalize their continued support for him.

This is disturbing. If politicians suffer essentially no diminution of support from being wrong and/or lying, they'll have no reason to hew to the truth. And the proliferation of lies debases public discourse and inflames partisan passions.