"The point was to engage students in an otherwise dry and difficult subject material." 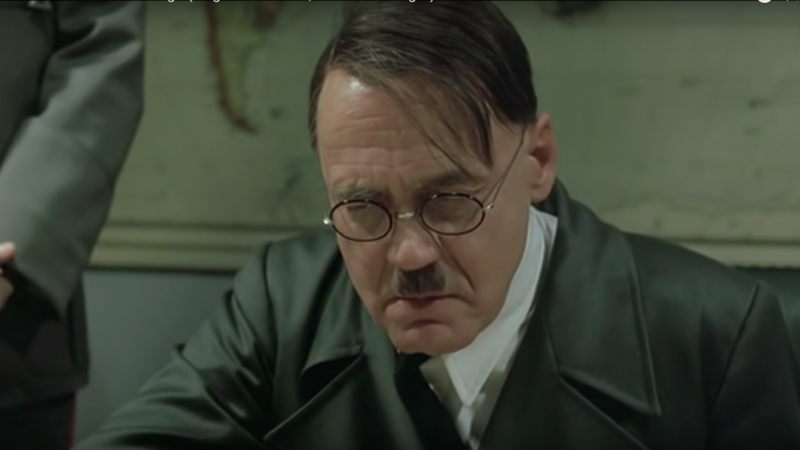 Catherine West Lowry is a senior lecturer at the University of Massachusetts Amherst. For the past 13 years, she has taught introductory accounting—a "dry and difficult subject matter," in her words.

To make the class more exciting, Lowry has for years let students make funny videos for extra credit. Some of these have been shown in class. A parody video from 2009 was particularly popular and has resurfaced in subsequent years.

Last semester, when Lowry showed this specific video, many students laughed at it. But at least a few were offended and complained to the administration, which subsequently relieved Lowry of her teaching duties.

The video in question is in the style of the popular Downfall parodies. Downfall, a 2004 German film that depicts the final days of Adolph Hitler and his inner circle, includes an extended scene of Hitler screaming at his subordinates that is rife for parody. People change the subtitles so that Hitler is ranting about something else: Here's a meta example about the parodies themselves, and here's one where Hitler realizes Pokemon aren't real. Lowry's students made one where Hitler is enrolled in the course and receive a bad grade.

Some of the humor may have crossed a line, in the eyes of a few students. At one point, the Hitler subtitle read: "Don't you dare finish that sentence or I'll send you to a chamber. And it won't be the chamber of commerce. I can guarantee that."

"People sort of realized that that was a little over the top, maybe, for the classroom," said another. "But generally, people laughed pretty hard at it [the video]. I certainly did."

A second video—this one a parody of the 2018 song "Bust Down Thotiana"—also drew the attention of the administration.

Dean Anne Massey removed Lowry from her teaching position and attended the class's next session to inform students. Many took the news poorly, shouting "bring back [Lowry]." They eventually walked out in protest.

Massey did not immediately respond to a request for comment. A spokesperson for the university told the Chronicle that the video was objectively offensive, and had no place in the classroom.

Lowry sent an email to students apologizing if any of them were offended. At the same time, she was surprised by the administration's "snap judgment" that she could no longer teach her class:

"This was an educational opportunity at a major research university. It's just unfortunate that the university did not take advantage of this educational opportunity. Instead, they chose to follow a punitive process, which doesn't really help anybody," Lowry said. "I could have easily dealt with this, if I had been afforded that opportunity. They made a snap judgment and really trampled the reasonable processes we have in place here."

UMass Amherst is a public university, and punishing a professor for an attempt at humor raises some troubling First Amendment issues. The administration should correct course and reinstate Lowry. No one should be encouraging accounting professors to make their classes even more boring.

(Reason commenters once made a Downfall parody video at my expense, after I had forgotten to post the P.M. Links. I can no longer find the video, but if anyone manages to dig it up, please share.)