Such a high approval rate reflects the threat these laws pose to due process and the Second Amendment. 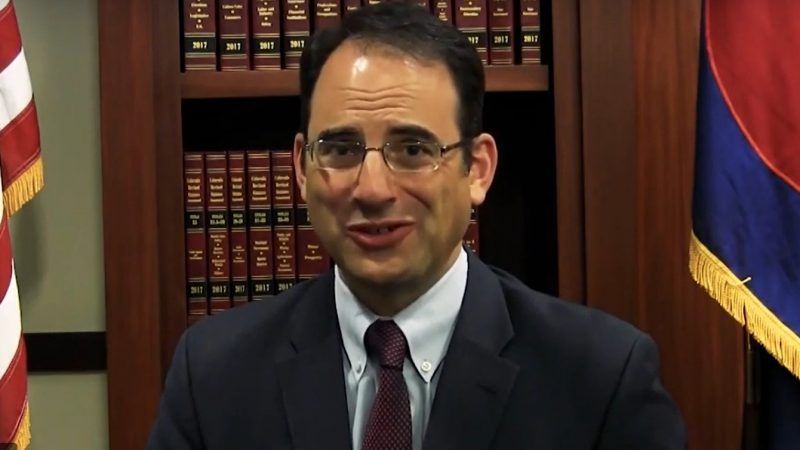 The Colorado legislature's official fiscal analysis of that state's new "red flag" law, which took effect this week, projects that police and "family or household members" will use it to seek gun confiscation orders against people they portray as threats to themselves or others about 170 times a year. The analysis also assumes that 95 percent of those petitions will be granted, which is not far-fetched given Florida's experience with such orders.

Such a high approval rate reflects the due process problems with red flag laws, which take away people's Second Amendment rights for a year or more based on vague standards and dubious evidence that judges are not inclined to question because they worry about the potentially deadly consequences of rejecting petitions. But there are a couple of reasons to think Colorado's approval rate may not be quite as high as Florida's.

First, of the 17 states with red flag laws, Colorado is the only one that provides court-appointed counsel to respondents who can't afford lawyers or choose not to hire them. Legal representation is crucial for respondents trying to navigate a process that is stacked against them from the beginning.

Second, Colorado's law allows a long list of people to seek what it calls "extreme risk protection orders" (ERPOs), including anyone related to the respondent by blood, marriage, or adoption; anyone who has produced a child with the respondent; and current or former spouses, domestic partners, girlfriends, boyfriends, and housemates. In Florida, by contrast, petitions must be filed by law enforcement officers or agencies. While Colorado's much broader approach creates a bigger risk that biased individuals will seek ERPOs out of personal animus or sincere but mistaken concerns, that risk may lead judges to treat petitions more skeptically. In Maryland, where the list of potential petitioners is similar to Colorado's, the approval rate for final ERPOs is around 62 percent, substantially lower than the 95 percent rate in Florida.

Whatever the approval rate turns out to be in Colorado, there are sound reasons to be concerned that ERPOs will be issued against many people who are neither suicidal nor homicidal. That is bound to be true with the initial, ex parte orders, which last up to 14 days. At that stage, the respondent has no opportunity to contest the allegations against him, and the standard of proof ("preponderance of the evidence") is weak. The experience of other states suggests that judges rarely, if ever, decline to issue temporary orders, which in Colorado are based on a claim that the respondent "poses a significant risk of causing personal injury to self or others in the near future."

This is also the stage where the risk of violence may be greatest, since police arrive without notice to take away people's guns. The consequences can be deadly.

When the respondent finally gets a hearing, the petitioner is supposed to show by "clear and convincing evidence" that he "poses a significant risk of causing personal injury to self or others." While the standard of proof is stronger at this stage, the risk no longer has to be imminent, the judge may consider any evidence he deems relevant, and the meaning of "significant risk" remains unclear. Although the name of these orders implies that the risk is "extreme," the law requires nothing of the sort. That problem is shared by nearly all of the red flag laws that have been enacted so far. The notable exception is Vermont's law, which allows petitions only by prosecutors and requires them to show, based on the respondent's actions or threats, that he poses "an extreme risk."

Under Colorado's law, a final ERPO lasts for 364 days unless the respondent seeks early termination and shows by clear and convincing evidence that he does not pose a significant risk. That case will be hard to make, especially since "significant risk" is undefined and judges will not want to take the blame should something terrible happen after they terminate an order. The petitioner has a right to seek an extension of the order before it expires, based on the same standard of proof.

Critics of Colorado's red flag law, including gun rights activists and some county sheriffs, rightly worry that judges will err on the side of issuing ERPOs, since the risk of suicide or homicide will loom large compared to the risk of unjustly but temporarily taking away someone's constitutional rights. "We want sensible people to have firearms," one activist told Colorado Public Radio at a rally last month. "We're not looking for people who are mentally incapacitated or whatnot. But when you talk about the red flag law, you're talking about taking away people's due process. Basically you're guilty until proven innocent."

Eagle County Sheriff James van Beek notes that when the target of an ERPO tries to have it terminated, "the burden of proof is not on the petitioner (the accuser), as in every other legal case, but instead, is placed on the respondent (defendant) to prove that the accusations are wrong." He observes that "proving one's sanity could be very difficult, as it is highly subjective." Nor is "proving one's sanity," however that's defined, enough to prevail, since a person may be considered a threat even if he does not qualify for a psychiatric diagnosis.

Dozens of Colorado counties have responded to the red flag law by declaring themselves "Second Amendment sanctuaries," and several sheriffs in rural areas have said they will not enforce the law. While sheriffs have the discretion to decide whether their offices will seek ERPOs, refusing to serve orders obtained by other petitioners would create a clear conflict with state law. Colorado Attorney General Phil Weiser, who testified in favor of the red flag law, has predicted that resistant sheriffs will change their minds when they encounter suicidal or dangerous people who can't be trusted with guns. But correctly identifying such people is the central problem that supporters of red flag laws face, and so far they have not done a very good job of meeting that challenge.

[This article has been revised to reflect the most recent tally of Colorado counties that have passed resolutions against the red flag law.]