U.S. Military Retaliation Against Iran Looms After Attack on U.S. Embassy in Baghdad

Several dozen protesters tried to storm the American embassy in Baghdad in retaliation for U.S. airstrikes in the country over the weekend. 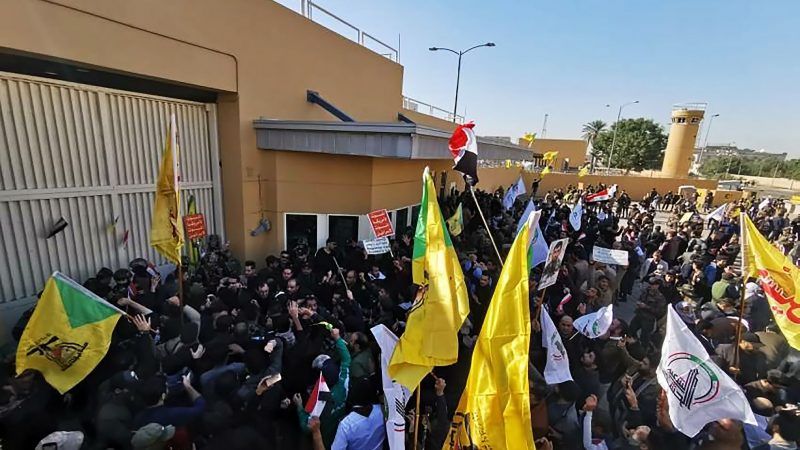 Demonstrators attempted to storm the U.S. embassy in Baghdad, Iraq, on Tuesday as part of a protest against American airstrikes that had targeted a militia group in the country over the weekend.

Media reports say that hundreds of demonstrators had gathered outside the embassy compound chanting "Down, down USA!" while smashing security cameras and setting fire to embassy walls. Several dozen of these protestors then managed to break down the embassy's main door and set fire to a reception area, according to Al Jazeera.

The U.S. ambassador and other embassy staff were evacuated.

On Sunday, the U.S. had conducted airstrikes against the Iranian-backed, Iraqi government-sanctioned militia group Kataib Hezbollah in retaliation for a Friday rocket attack conducted by that group against a U.S. military base in Kirkuk, Iraq.

Those airstrikes received strong condemnation from both the Iraqi and Iranian governments, with the latter describing them as "a clear example of terrorism," reports The Washington Post. Other militia leaders promised retaliation. The crowd that attacked the U.S. embassy grew out of a street funeral procession in Baghdad for fighters killed in Sunday's airstrikes.

On Twitter this morning, President Donald Trump defended the airstrikes while blaming Iran for the demonstrations at the embassy.

"Iran killed an American contractor, wounding many. We strongly responded, and always will. Now Iran is orchestrating an attack on the U.S. Embassy in Iraq," tweeted Trump. "They will be held fully responsible. In addition, we expect Iraq to use its forces to protect the Embassy, and so notified!"

Iran killed an American contractor, wounding many. We strongly responded, and always will. Now Iran is orchestrating an attack on the U.S. Embassy in Iraq. They will be held fully responsible. In addition, we expect Iraq to use its forces to protect the Embassy, and so notified!

Trump's former National Security Adviser John Bolton was of a similar mind, drawing comparisons to the Iranian seizure of the U.S. embassy in Tehran in 1979.

The attack on the U.S. embassy in Baghdad is straight from Iran's playbook in 1979. It's a sign of Iranian control over Shia militia groups, not a sign of Iraqi anti-Americanism. We must protect our citizens from Iranian belligerence.

The situation raises the possibility of escalating violence between the U.S. and Iran, warns Christopher Preble, a defense policy scholar at the Cato Institute.

"I'm very concerned that the Trump administration's response is to escalate and to apply pressure. We've reached the point at which escalation almost certainly will be in the form of violence and kinetic action," Preble tells Reason, saying that more airstrikes are possibly on the way and could hit targets inside Iran itself.

The Trump administration has repeatedly ratcheted up tensions with Iran, tearing up the Obama-era nuclear deal, imposing mounting sanctions on the country, and sending more military forces to the region to counter Iranian influence.

The embassy attack and the risks it brings for more U.S. military action in the region are more fruits of the "original sin" of invading Iraq in the first place, says Preble.

"The advocates for that war claimed that the Iraqis would welcome our presence there. They suggested it would be a blow to Iran and undermine Iran's power in the region, and they claimed it would lead to the flowering of democracy, not merely in Iraq, but in the entire region. None of those things are true," he says.

Instead, after trillions of dollars spent and thousands of U.S. lives lost, Iraqis appear more resentful of the American presence in their country than ever, and the U.S. is looking at getting more embroiled in yet another conflict in the region.