"There has to be a war on poverty," says Michael Bloomberg. Does he know how the last one turned out? 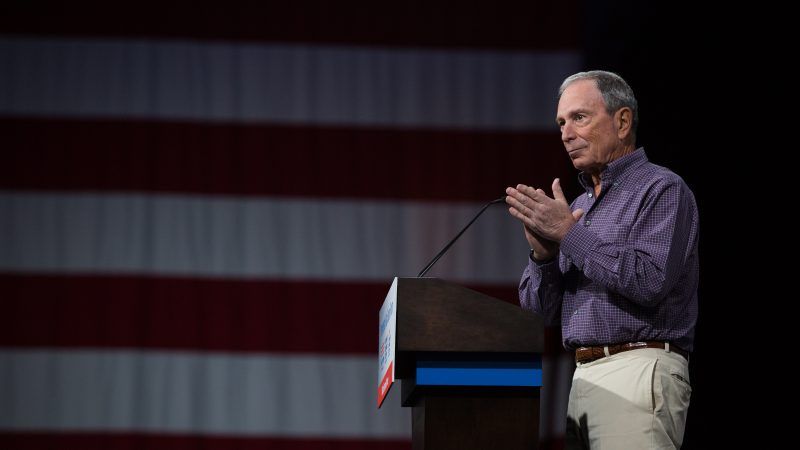 During his first inaugural address in 1964, President Lyndon Baines Johnson declared a no-holds-barred federal "war on poverty" that promised not only to improve poor people's economic conditions—but to address the fundamental causes of their despair. "Our aim is not only to relieve the symptom of poverty," he said, "but to cure it, above all, to prevent it."

It sounded so high-minded, yet what Johnson later termed "The Great Society" left a trail of destruction that rivaled his other initiative—the Vietnam War. Poverty rates are lower today than in 1964, but that's "despite" the government's war on it. America now suffers from rates of dependency and family breakdown that are partially the result of Johnson's not-so-great ideas. Despite these "investments" and social programs, poverty—especially in California—is as intractable as ever.

Why the short remembrance of the Johnson administration? Apparently, most Democratic presidential candidates—and one in particular—seem to have missed the lessons of the past 56 years. In his presidential campaign's recent tour in California, former New York City Mayor Michael Bloomberg said "my job will be to move all Americans ahead, and that includes committing our country to new and innovative ways to combat poverty. There has to be a war on poverty."

One of the weird things about getting older is listening to people revive old discredited slogans that make me shudder when I hear them. Republicans push an "America First" agenda now, which brings back echoes of the 1940s-era pro-fascist movement. California Democrats talk about fighting "economic crimes," which has a strange Soviet-like ring to it. And now a 2020 presidential candidate talks about a "war on poverty" without any sense of the past.

I'm all for "innovative ways to fight poverty," but most of Bloomberg's ideas—hiking the minimum wage, dumping billions of dollars in public-housing programs and the like—are retrograde, not innovative. I like his plan to ease zoning restrictions, which will help boost development in urban areas, but beyond that it's more of the same-old failed policies of dumping government money on the problem. He hasn't learned a thing.

In fact, Bloomberg made his remarks in Stockton, where poverty rates top 20 percent. The city's young and idealistic mayor, Michael Tubbs, had endorsed Bloomberg earlier in the day. Tubbs' best-known idea is called Universal Basic Income, whereby the city provides $500 a month to a few dozen families with no strings attached. The pilot project is privately funded, but supporters see Stockton's plan as an experiment that could be replicated elsewhere using public funds.

That epitomizes the old "war on poverty" approach, which is based on the idea that the only reason many people are poor is that they don't have any money. Give them money or housing or whatnot and, viola, problem solved. Unfortunately, life doesn't work that way. "While the state of neediness we call poverty does involve a lack of material resources, it also involves a mass of psychological and moral problems, including weak motivation, lack of trust in others, ignorance, irresponsibility, self-destructiveness, short-sightedness, alcoholism, drug addiction, promiscuity and violence," explained a still-timely 1999 piece by the free-market Foundation for Economic Education.

In my first newspaper job, I covered a plan by the city's officials to build scattered-site housing—a major initiative during Bill Clinton's administration—and rent them on the cheap to poor people. Plopping subsidized suburban-style houses in the middle of settled working-class neighborhoods often undermined the surrounding city blocks for a pretty obvious reason.

You can give a poor person a middle-class house, but that doesn't automatically give them the social skills to turn them into bona fide members of the middle class. A 2016 article in the liberal publication Vox looked at Brooklyn's Bedford-Stuyvesant neighborhood in Bloomberg's own city and found that despite all the money and good intentions, the situation now is almost indistinguishable from what it was when the Great Society concentrated its efforts there.

California has the nation's highest poverty rates, according to the Census Bureau's cost-of-living-adjusted measure, even though it offers the most generous income-support programs and the most aggressive minimum-wage and anti-poverty laws. Johnson was right about one thing, though, when he said in his address that "lack of jobs and money is not the cause of poverty, but the symptom."

Instead of offering failed multitrillion-dollar ideas from the past, Bloomberg and others need to focus on boosting public-school competition and reducing regulations that impede job growth in struggling cities such as Stockton. That's the kind of "war on poverty" that's worth fighting.