The Vaping Panic Is a Major Setback for Public Health

"There's no question public health would benefit dramatically if everybody switched completely to e-cigarettes."

Jacob Sullum | From the January 2020 issue 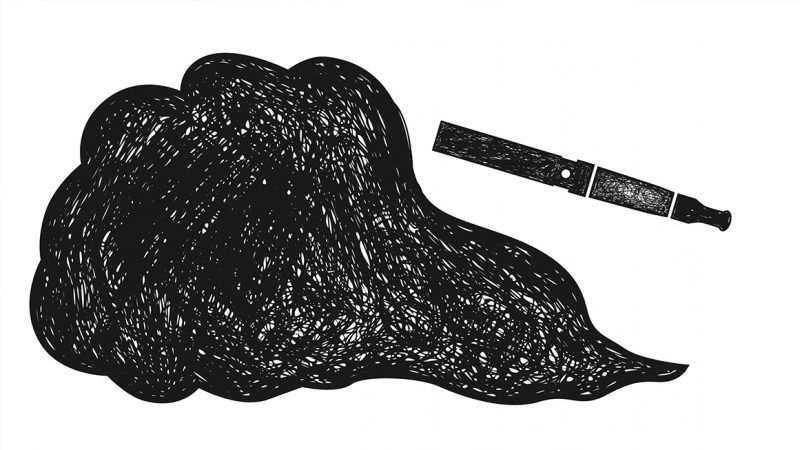 When tainted lettuce causes an outbreak of gastrointestinal disease, the federal government does not issue general warnings about the hazards of eating. Nor does it order a recall of all fresh vegetables. Instead it focuses on the specific products consumed by the people who got sick.

After doctors began to report respiratory illnesses among vapers last summer, by contrast, federal agencies urged the public to avoid all vaping products, including legal e-cigarettes that deliver nicotine, even though it was clear early on that the vast majority of cases involved black-market cannabis extracts. That indiscriminate approach undermined public health in two ways.

First, it did not provide specific guidance to cannabis consumers who might have avoided the products implicated in the lung disease outbreak if they had been adequately informed. Second, it scared smokers away from vaping products that offer potentially lifesaving alternatives to conventional cigarettes. The vague warnings also encouraged a series of panicky state bans that threatened to drive vapers toward illegal products that may pose special hazards.

As of November 5, the U.S. Centers for Disease Control and Prevention (CDC) had counted more than 2,000 lung injuries associated with vaping, including 39 deaths. In cases where the information was available, the CDC reported, just 11 percent of patients with respiratory symptoms said they had vaped only nicotine. As the CDC noted, some of those patients may have been reluctant to admit illegal drug use. Furthermore, it's not clear that any of them had used legal nicotine products, as opposed to black-market e-liquids of unknown provenance and composition.

While legal e-cigarettes have been used by millions of Americans for years, the reports of acute, life-threatening respiratory reactions did not emerge until recently. That suggests the problems are caused by relatively new additives or contaminants in black-market THC cartridges, and perhaps also in counterfeit e-cigarette pods or bootleg nicotine e-liquids.

An analysis of lung tissue samples from 17 patients by researchers at the Mayo Clinic, reported in The New England Journal of Medicine, suggested that many of the lung injuries were caused by exposure to toxic chemicals. Another possible culprit is vitamin E acetate, a cutting agent found in illegal THC vapes that is safe to swallow but may be hazardous when inhaled, leading to a rare form of pneumonia caused by fat particles in the lungs.

Despite the evidence pointing to black-market products (and THC cartridges in particular), the CDC and the Food and Drug Administration (FDA) continued to suggest that people "consider refraining from use of all e-cigarette and vaping products." At the same time, both agencies cautioned former smokers who are now vaping against returning to their old habits.

The reason for the latter recommendation is plain: E-cigarettes, which do not contain tobacco and do not burn anything, are much less dangerous than the conventional, combustible kind. Studies of biomarkers in smokers who have switched to vaping find that they are exposed to far fewer hazardous substances, at far lower levels, than people who continue to smoke. As David Abrams, a professor of social and behavioral sciences at New York University, noted in a September interview with CBS News, "e-cigarettes are way less harmful than cigarettes, and they can and do help smokers switch if they can't quit."

A controlled, randomized study reported last February in The New England Journal of Medicine found that e-cigarettes are nearly twice as effective in smoking cessation as alternative nicotine replacement products. The harm-reducing potential of e-cigarettes has been recognized by a wide range of public health agencies and organizations, including the FDA, the Royal College of Physicians, the American Cancer Society, and the National Academies of Sciences, Engineering, and Medicine. In 2015, Public Health England said "best estimates show e-cigarettes are 95% less harmful to your health than normal cigarettes."

That point was lost in government warnings that implied all vaping products are potentially deadly. "It seems there's too much conflating these tragic lung injuries with store-bought brands of regulated, legal e-cigs like Juul and NJOY," former FDA Commissioner Scott Gottlieb observed on Twitter in late September, "and far too little blaming THC, CBD, and bootleg nicotine vapes—where so far, the only available hard evidence points." A week later, Boston University public health professor Michael Siegel noted on his tobacco policy blog that "there are no cases that have been shown to be associated with the use of store-purchased nicotine e-liquids, and it seems extremely unlikely that these products have any involvement in the outbreak."

Washington, D.C., psychiatrist Sally Satel, a resident fellow at the American Enterprise Institute, made the same point in congressional testimony on October 16. "The lung injury problem is a story of the dangers of the black market, not of vaping," she said. "Consumers have been using commercially available vaping devices and nicotine products for 10 years without a single recorded death or any surge of illnesses…until this summer. What we are observing today is consistent with a relatively acute contamination."

That's not the message Americans have been getting from public health officials or news outlets influenced by the government's framing of the issue. A Morning Consult poll conducted in September found that 58 percent of respondents, based on what they had "seen, read, or heard on the news lately," believed people had "died from lung disease" caused by "e-cigs, such as Juul." By comparison, 34 percent said the cases involved "marijuana or THC e-cigs." Only 22 percent of respondents understood that e-cigarettes are less hazardous than the conventional kind, down from 36 percent in a June 2018 poll.

As Satel noted, "Eliminating flavored nicotine e-liquids will not prevent further cases of lung disease, because those products had nothing to do with the outbreak." Meanwhile, such bans deprive former smokers of the legal e-liquids they overwhelmingly prefer. Surveys find that supposedly kid-friendly flavors are highly popular among adult vapers, who say they are important in the process of giving up smoking. After those options are eliminated, some vapers may return to smoking, while others may start buying potentially tainted black-market e-liquids.

If every smoker in the United States switched to e-cigarettes, NYU's Abrams estimates, it would prevent as many as 7 million smoking-related deaths. No wonder Gottlieb, when he was running the FDA, called e-cigarettes "a tremendous public health opportunity." But that opportunity is threatened by misleading warnings about the hazards of vaping and bans on the e-liquids that former smokers demonstrably want.

"There's no question public health would benefit dramatically if everybody switched completely to e-cigarettes," Abrams told CBS News. "If we lose this opportunity, I think we will have blown the single biggest public health opportunity we've ever had in 120 years to get rid of cigarettes and replace them with a much safer form of nicotine."