His brutal response to the protests against his anti-Muslim initiative reveal him as a Hindu nationalist, not a reformer. 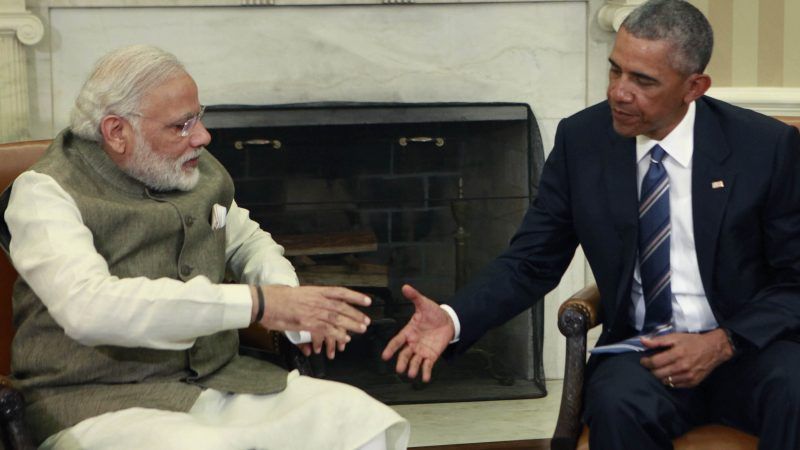 Indian Prime Minister Narendra Modi is using an iron fist to smash protests over his latest effort to erode the citizenship rights of Indian Muslims. He, and many of the state governments that his party controls, have suspended the internet in many cities, dispatched paramilitary forces to storm Muslim colleges and beat up students, and imposed a ban on protests, including in Bangalore, where police roughed up and arrested one of India's most renowned historians, Ramachandra Guha. The death toll of the protesters has now reached 25.

Modi is out of control. Even China's authoritarian rulers have shown more restraint in dealing with the Hong Kong protesters.

It is high time that Modi's admirers in the West—politicians, business leaders, and Hollywood celebrities who fawned over him—admit that they made a profound mistake. They embraced him despite clear warnings that his high-minded talk about turning India into an economic and technological powerhouse masked a sinister Hindu nationalist agenda.

He is not a hero of progress and development but a blood-and-soil nativist arguably more dangerous than any in the West.

Let us remember what we once knew but seem to have forgotten: Modi cut his political teeth in the RSS, the militant wing of a party obsessed with avenging historic slights—real and imagined—that Hindus endured under Muslim rule centuries ago. One of the RSS's members assassinated Mahatma Gandhi, whom some Hindu nationalists regard as a Muslim "appeaser." Modi himself has a long history of anti-Muslim animus. In 1992, he rode a chariot in the Hindu procession that marched to the iconic Babri mosque and razed it. His feelings morphed into actual bloodletting in 2002, when he was the chief minister of the state of Gujarat. Hindu thugs, some connected with his party, went on a rampage and slaughtered 1,000 Muslim men, women, and children as the state police stood by.

Modi expressed not an iota of remorse for the events in Gujarat when he ran for the prime minister's office in 2012, even comparing the murdered Muslims to "puppies" run over by a careless driver.

Yet after he became prime minister, the world gave him the benefit of the doubt. The man who had been banned from many Western countries, including America, because of his role in the Gujarat pogrom became an international sensation.

A campaign-style extravaganza that Modi held in Madison Square Garden to celebrate his victory was attended not only by 18,000 gushing Indian Americans but also 40 U.S congressmen. Hugh Jackman introduced him, and he applauded heartily when Modi recited Sanskrit shlokas or verses calling for world peace.

President Barack Obama went beyond ordinary diplomatic protocol in welcoming Modi during that visit. He hosted a White House dinner for Modi and invited him to stroll to the Martin Luther King memorial with him. A year later, when Obama went with first lady Michelle to India for a state visit, he commended Modi's "legendary work ethic" and his fashion sense, even joking about wearing a kurta shirt to imitate Modi's sartorial style.

The silencing effect that Obama's chumminess had on Modi's critics cannot be overstated. If the first black American president who fully understood the struggle for minority rights could endorse Modi, they reasoned, then Modi naysayers were just paranoid hysterics whose hatred was blinding them to his manifold virtues.

President Donald Trump, who isn't shy about hobnobbing with odious leaders, has unsurprisingly taken things to a whole new level in a naked bid for the Indian American vote. At the #HowdyModi rally held in Houston this summer to celebrate Modi's re-election, Trump warmed up the crowd for Modi, calling him "his friend" and "a great man and a great leader." A whole throng of Texas leaders from both parties, including Republican Sen. Ted Cruz and Democratic Rep. Sheila Jackson, stood behind Modi on stage like a hallelujah chorus.

Even more disheartening has been the reaction of U.S. industry leaders. Facebook's Mark Zuckerberg got the ball rolling five years ago when he enthusiastically served up Modi agitprop, holding a townhall event for him at his company's headquarters. Zuckerberg asked Modi such pointed questions as how much he loved his mother and how he planned to use his mastery of social media to transform India. Two weeks after this lovefest, India experienced the first in what was to become an epidemic of beef lynchings under Modi. Hindu cow vigilantes stormed a Muslim family's home in Dadri, a village not far from Modi's home in New Delhi, and pulled the old patriarch from his bed and bludgeoned him to death. Modi the transformative leader's response? Days of silence.

Zuckerberg was unfazed. He reiterated during Modi's #HowdyModi visit that he "deeply appreciates PM Modi's commitment to Digital India." This was one month after Modi shut down the internet in Kashmir and imposed central rule on this Muslim-dominated state, arresting its leaders and scrapping its constitutionally guaranteed autonomy. That shutdown is now in its fourth month, earning Modi, the vaunted digital leader, the great distinction of engineering the longest internet shutdown in a democracy.

Microsoft founder Bill Gates bestowed his foundation's prestigious "Global Goalkeeper Award" on Modi this September for his "Swaatch (Clean) India" campaign and for expanding access to toilets in the country. This elicited howls of protest from human rights groups. Muslim artists Riz Ahmed and Jameela Jamil pulled out of the awards ceremony. But Gates defended the award, calling Modi "brave" for tackling the issue of toilets.

Then there is Bridgewater Associates co-founder Ray Dalio, who opined last month, after India's economic growth hit a 10-year low and unemployment a 45-year high, that "Prime Minister Modi is one of the best, if not the best, leaders in the world." And Qualcomm Chairman Paul Jacobs proclaimed that Modi's leadership is "really moving in the right direction." And Unilever CEO Paul Polman declared that he was "very confident about the Modi government."

The effect that such endorsements have in emboldening Modi and undermining the internal points of resistance to him is incalculable. Try criticizing Modi to his supporters, and they'll instantly throw all his international awards and accolades in your face. But whatever the excuse of these leaders for issuing such deluded statements in the past, there can't be any now that Modi is taking the gloves off. Just because a fanatic has changed his tune doesn't mean he has changes his mind.

The least these leaders can do now is condemn Modi's campaign of persecution. It has been painful for many of us who believe in India's pluralism and democracy to watch Modi transform himself from an international pariah to an international star with the help of Western elites. He may be unstoppable at this stage. But he is also a profoundly vain man, a publicity hound who craves international attention and respectability. So their condemnation now may well make a difference. Who knows how far he is prepared to go to advance his Hindu nationalist project?

The protesters in India are putting their lives on the line to stick up for their constitution and the nation's minorities. It is their fight and they are fighting it. But it is not too much to ask that Modi's useful idiots in the West acknowledge their mistake.

A version of this column appeared in The Week.