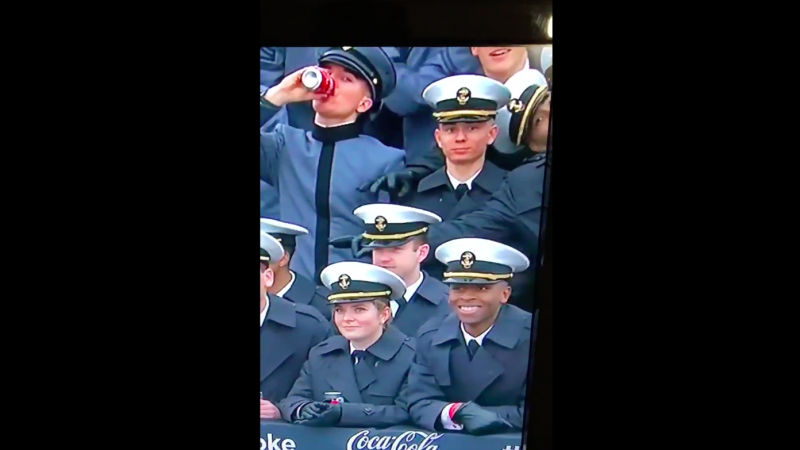 U.S. Military Academy officials are investigating several cadets who were caught on camera flashing hand signs at the Army-Navy football game on Saturday. Screenshots of the hand gestures went viral on social media, where woke Twitter users asserted that the cadets had made the white power "OK" symbol.

Young extremists in the Army and Navy? That's one possibility. The more benign explanation—and a far more likely one—is that the cadets were playing a well-known kids' game that has nothing to do with white supremacy.

Several cadets could be seen on camera making the "OK" gesture, which quickly drew the ire of progressive activists due to its recent association with white supremacy. (The hand "OK" sign is now considered an extremist symbol by the Anti-Defamation League, though only under certain circumstances.)

"This happened on national television today," tweeted Hamdia Ahmed, a model and activist. "These two felt like it was okay to put up a white power symbol on national tv."

They are well aware of what they are doing and think it's funny. Disgusting. #ArmyNavyGame pic.twitter.com/mrpuIKrZGM

A spokesperson for the Naval Academy told The Washington Post that officials were investigating what happened, and it would be "inappropriate to speculate any further while we are conducting this investigation."

It's important to note that the "OK" symbol's status as a hate symbol is hotly debated. It never became a hate symbol on its own terms, but was the subject of a campaign by far-right trolls to convince everyone that touching the thumb to the index finger formed a "W" and a "P" for "white power." According to The New York Times:

It started in early 2017 as a hoax. Some users of 4chan, an anonymous and unrestricted online message board, began what they called "Operation O-KKK," to see if they could trick the wider world — and especially liberals and the mainstream media — into believing that the innocuous gesture was actually a clandestine symbol of white power.

"We must flood twitter and other social media websites with spam, claiming that the OK hand signal is a symbol of white supremacy," one of the users posted, going on to suggest that everyone involved create fake social media accounts "with basic white girl names" to propagate the notion as widely as possible.

Some white nationalists did indeed appropriate the gesture. But for other people, it was a nasty game to trick gullible people, and it largely worked. Some people who flash the "OK" sign likely have no idea about these unsavory connections, and even the ADL cautions that:

The overwhelming usage of the "okay" hand gesture today is still its traditional purpose as a gesture signifying assent or approval. As a result, someone who uses the symbol cannot be assumed to be using the symbol in either a trolling or, especially, white supremacist context unless other contextual evidence exists to support the contention. Since 2017, many people have been falsely accused of being racist or white supremacist for using the "okay" gesture in its traditional and innocuous sense.

Back to the cadets: Having carefully reviewed the video footage in question, it seems pretty likely that their gestures were even less significant—they are probably playing the circle game. What is the circle game? you ask. Well, it's pretty simple: You make a circle gesture with your hand, and if someone else looks at the circle, you get to punch that person.

I was not familiar with the game, but I've subsequently heard from enough people who played it during their teen years. (During my own adolescence, we had a similar game: You could punch someone if you were the first to spot a specific kind of car—a Volkswagon Beetle or a P.T. Cruiser—and then that person couldn't hit you back.)

It seems fairly obvious that that's what the cadets are doing, since they aren't just flashing the hand gesture at the camera, but rather, doing it in each other's faces in order to make each other accidentally look at the circle.

So this is all rather silly and a bit juvenile—but unless some additional details emerge, it seems extremely unlikely that the people involved were trying to send subliminal racist messages. As is often the case, social media's habit of imputing maximally sinister motivations to random people's behaviors is deeply misguided. But the price of cancel culture is eternal vigilance.