What Do We Owe to People Whose Countries We Have Broken?

The case for offering victims of our foreign policy a chance to get out and start over.

Katherine Mangu-Ward | From the January 2020 issue 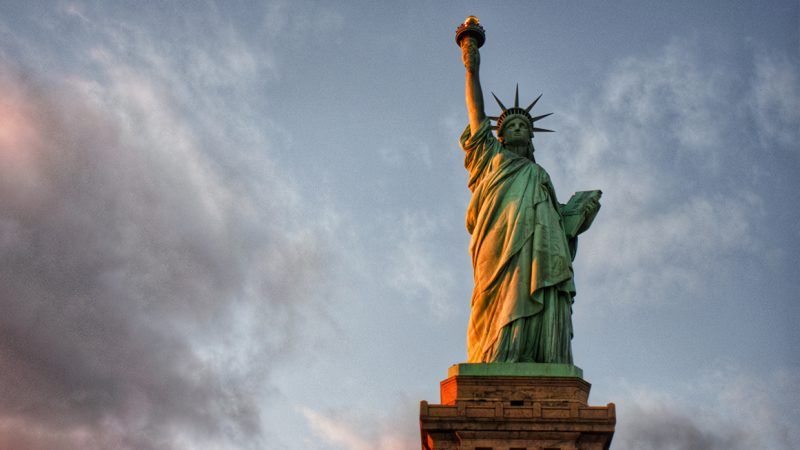 "You are going to be the proud owner of 25 million people. You will own all their hopes, aspirations, and problems. You'll own it all." According to legend, Secretary of State Colin Powell offered that pithy thought to George W. Bush in 2002 as they contemplated invading Iraq. As The Washington Post's Bob Woodward later wrote: "Powell…called this the Pottery Barn rule: You break it, you own it."

Setting aside the wildly problematic idea of "owning" 25 million people, subsequent events in the region have demonstrated that Powell was onto something. In both Iraq and Afghanistan, the post-9/11 invasions were followed by yearslong slogs. The citizens of both countries have been made meaningfully worse off by ongoing American military meddling—assuming they survived at all.

We don't "own" the people in the nations we have upended, but it's worth asking what we owe them.

What if the best way to discharge our debt to the victims of our foreign policy is to offer them a chance to get out and start over? The idea is not without precedent in American immigration policy.

The most modest form of this is the special rule that allows civilians who might be persecuted for assisting U.S. armed forces abroad to seek refuge here. That process is cumbersome and frequently requires high-level intervention, as Joe Coon described in our November 2017 issue, recounting his efforts to get his Iraqi interpreter out of the country. But it is an option. And its very existence shows that our lawmakers already implicitly acknowledge the moral obligations we're incurring with our foreign adventurism.

On a larger scale, we can look to the Indochina Migration and Refugee Assistance Act of 1975, a response to the chaos in Southeast Asia as the Vietnam War wound down. In the immediate aftermath of the war's end, more than 130,000 Vietnamese who had worked with American or South Vietnamese forces were evacuated to the United States. But the region continued to fall apart after that, resulting in the eventual resettlement of hundreds of thousands of "boat people" and others in the U.S. throughout the 1980s.

Unsurprisingly, this effort was controversial. It left many in refugee-camp limbo, sometimes for years. But again, underpinning the effort was the recognition that the U.S. had in some sense broken Vietnam—and had made the lives of those who collaborated with U.S. forces there especially untenable.

This treatment stands in contrast to Washington's more recent relations with the Kurds. This transnational population has been screwed over with special zeal by U.S. foreign policy, arguably going back to World War I. American leaders have repeatedly broken promises and left the Kurds to the mercies of more-powerful neighboring populations, most recently when Donald Trump exposed the Kurdish people to Turkey's reprisals. Kurds who have come to the U.S. have made a good life here, including the robust Iraqi Kurdish population in Nashville that Reason profiled in October 2017, but no such offer was made this autumn to the people who had been fighting ISIS and other Islamic militants alongside American forces.

These decisions to open our doors or slam them shut were highly political, and they were made at moments of crisis—albeit totally foreseeable and predictable crisis. In fact, until 1980, refugee populations were allowed in under presidential parole power. Even today, presidents typically behave as though they are responsible for and have wide latitude in such matters. Under President Jimmy Carter, the U.S. adopted a more formal understanding of what makes someone a refugee, but such strictures typically only last until the next crisis.

It is long past time to flip the script on legal immigration in the United States to a dramatically expanded system like the one described in James Stacey Taylor's "There Is No Line" (page 24). But even if we assume a system of continued artificial visa scarcity, people who wish to emigrate from nations we have broken have a unique claim on some of those slots.

If we could figure out how to make the Pottery Barn rule function in a more predictable and intentional way, it could create a virtuous cycle.

Many of those who favor a more aggressive foreign policy are also immigration restrictionists, a pairing most often found within the GOP. Why not yoke together some natural consequences? Automatically higher quotas for people from the nations where we have intervened would provide a useful reminder that we'd better not pick a fight unless we're sure it will make people better off or unless we're willing to welcome thousands or even millions of additional immigrants to our shores.

A possible corollary to the Pottery Barn rule is something voiced by 2020 hopeful Rep. Tulsi Gabbard (D–Hawaii): "Before sending our men and women into harm's way, we're not hearing about what is the problem that we're trying to solve, and what is the clear, achievable goal that we're sending them to do?" she told Reason's John Stossel (page 44). "Without that, we end up with the result that we have, where we have troops who are deployed in these other countries without a real understanding of what they're there to accomplish, and at what point they've accomplished that and then can come home."

Let's call this the Target rule: If you absolutely must go in, you need a game plan. Otherwise, after spending much more time and money than you expected, you'll probably end up leaving without what you came for in the first place.

Realistically, it's probably too much to ask our policy makers and beribboned generals to become principled noninterventionists or even that they practice the most basic levels of humility. And that means the question of what to do once we've made the inevitable mess abroad isn't going away.

Since formal declarations of war duly approved by Congress are now considered a quaint anachronism, determining who would be eligible for whatever special treatment we decided on would be tricky. And people from many countries are suffering not as a result of a formal military incursion but simply as a consequence of the United States' global leadership in the brutal and pointless war on drugs.

The caravan that came to our southern border and dominated headlines for months was composed largely of people who hailed from such countries—places where violence is generated largely by the prohibition on cocaine. The long-term solution to this is clear: end the war on drugs. But in the short term, accommodations might be in order for people whose homelands are no longer hospitable thanks to Americans' hypocrisy about chemical pleasure.

Our immigration policy—and especially our policy for those seeking refuge—has moved the wrong direction in recent years, with lower quotas, metastasizing bureaucracies, and cruel enforcement. But our foreign policy has been even worse. We are standing in Pottery Barn smashing vase after vase while promising to make a beautiful new fruit bowl with the pieces.

During a 2004 presidential debate, Sen. John Kerry amended the Pottery Barn rule to "if you break it, you fix it." But as anyone who has ever knocked over mom's favorite lamp knows, sometimes it's best to 'fess up and make amends in other ways instead of trying to fix something fragile and complex that you don't really understand.

For many of the millions of people whose lives have been shattered by Washington's meddlesome foreign policy, their hopes, dreams, and aspirations change when their countries explode around them. They begin to think about a new life, perhaps across the ocean or north of the Rio Grande. We owe it to them to make that a possibility.