Her plan isn't perfect, but she's right that the system is broken. Congress should act to fix it. 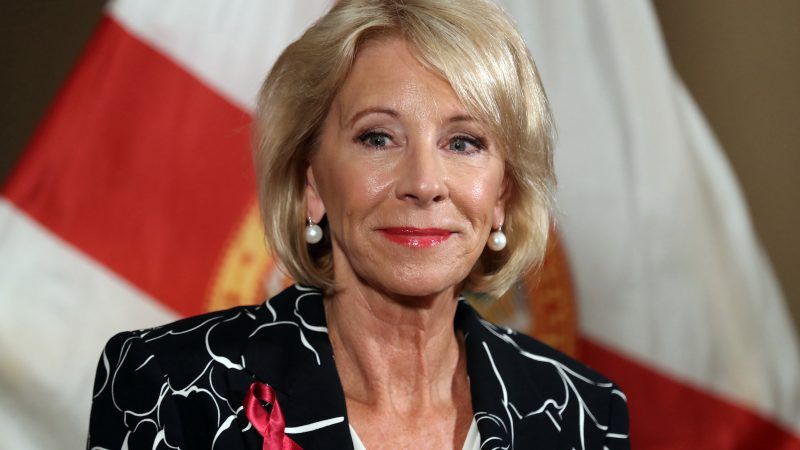 Congress, of course, will have to approve any changes. But lawmakers should seize the opportunity to pass some reforms. Whether or not you like what DeVos is pitching, the current system has some serious problems.

At the center of the secretary's proposal is a plan to spin off the Federal Student Aid (FSA) program from the Department of Education into a new, independent agency that would be run more like a bank. With more than $1.5 trillion in outstanding loans to more than 42 million borrowers, the FSA is the nation's largest consumer lender. DeVos argues that the number of unpaid loans—there are more than 11 million student loans in default, and 43 percent of all federal loans are "in distress"—is evidence that the program is not serving students' or taxpayers' best interests right now.

"Congress never set up the U.S. Department of Education to be a bank, nor did it define the secretary of education as the nation's 'top banker.' But that's effectively what Congress expects based on its policies," DeVos told a crowd at the Federal Student Aid annual conference in Reno, Nevada. "FSA's mission is to serve students and their families, but its structure is set up to serve politicians and their policies."

DeVos believes the problem lies in the patchwork of overlapping programs that have been foisted on the FSA since it was created in 1965. When graduates start repaying their federal loans, they are faced with eight different repayment plans, each with different income requirements. There are at least 30 deferment options and 14 loan forgiveness programs. Each comes with its own websites, administrators, and forms to be filled out. It's a tangled, confusing mess created by decades of well-intentioned efforts at making it easier for students to repay their loans—but it has probably had the opposite effect.

DeVos' plan does not appear to address the biggest problem with student lending: the role that federally subsidized loans have played in inflating the cost of higher education in recent decades. Spinning off the FSA into an independent agency could reduce the federal government's role in paying for Americans' college educations, but that's certainly not a guarantee. And while the impulse to reduce unnecessary duplication in existing government programs is a worthy one, creating new government agencies carries costs of its own.

Politically speaking, DeVos' proposal is probably best understood as an attempt to head off a national student loan forgiveness program by giving Congress an alternative. The student loan crisis has led many progressive politicians—including several top candidates for the Democratic presidential nomination—to call for wiping out all student debt and making college "free." But this would mostly benefit people who can already afford to pay for college in the first place, and it ignores the fact that most college grads end up making a huge return on their investment. It would do nothing to stop rapidly growing costs, and it would be financially unsustainable without massive tax increases.

DeVos, meanwhile, would transform the FSA into an independent agency that would report directly to Congress. The details of the plan remain sketchy, but the agency would be able to make loans and write its own rules for repayment plans and forgiveness options without having to obey Congress' demands or administer dozens of overlapping programs.

DeVos is right that the current status quo of federal student lending is broken. It clearly isn't working for students, and taxpayers will feel the pain if it leads to the creation of a multi-trillion-dollar new entitlement program for "free" college. Her alternative isn't perfect, but let's hope it starts a broader effort to untangle the student loan bureaucracy. Maybe Congress could even consider the unintended consequences of having federal student lending in the first place.