Clean technologies can compete (and win) if barriers to participation are removed. 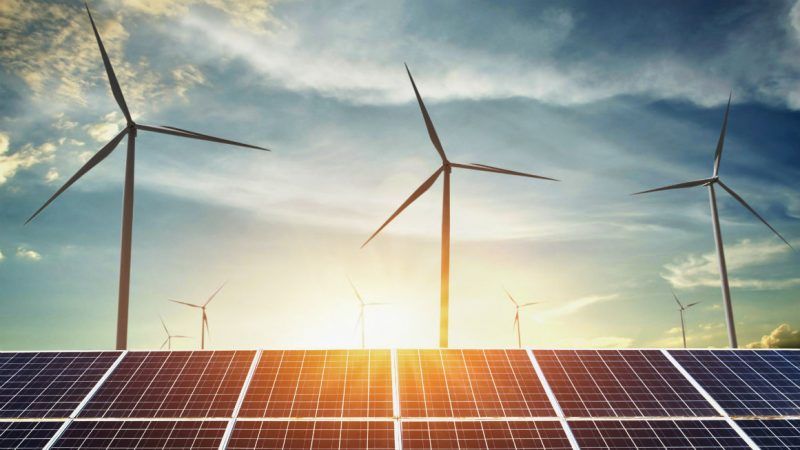 Roughly half of the Democratic presidential candidates believe a carbon tax "is the most straight-forward and efficient strategy for quickly reducing greenhouse gas emissions," in the words of Sen. Bernie Sanders (I–Vt.). They claim a carbon tax will, as Sanders put it, "help give energy efficiency and renewable energy the level playing field they deserve, making these technologies even more affordable."

This claim deserves scrutiny. First of all, the notion that a carbon tax will make renewable energy cheaper or more affordable is simply false. Instead, it will make fossil fuels more expensive, setting a higher benchmark price for renewable competitors, sending a weak signal to shift capital toward clean energy.

The second and more crucial issue is that a carbon tax does nothing to address the true culprits slowing deployment of clean energy solutions: the real-world monopoly barriers and technological constraints.

Carbon tax advocates believe fossil fuel penalties will force a shift to clean energy, but that shift is sometimes blocked by closed markets in which arcane rules protect incumbent monopolies. It's also sometimes blocked by the limitations of geography—solar energy thrives in Chile, for example, but it will be more expensive for fewer hours a day in Canada

Nor would a carbon tax make it easier for entrepreneurs to start auto companies, get vehicles through safety testing, or navigate complex Environmental Protection Agency rules on fuel diversity—the kinds of innovations that are crucial to confronting climate change.

Given these real world constraints, to trigger a rapid shift from high to low carbon energy, we'd need a very high carbon price—one that would make energy prohibitively expensive, imposing crippling costs on both consumers and businesses. Fear of such high costs sparks opposition. Gridlock has made a carbon tax federally dead on arrival, and thus completely ineffective as a policy proposal.

There's a third problem, too: All of this is outdated and off-target. Clean energy technologies are now less expensive than fossil fuels. Price is no longer the critical barrier. Technology limitations and politically-imposed market barriers are what's slowing deployment.

Fortunately, new and better policy tools are at hand.

If clean technologies can now compete and win, then we need to open closed markets by removing barriers to participation.

That's the core proposal of clean free market policy. Several free market think tanks (including the Reason Foundation, the nonprofit which publishes Reason) have distilled this insight into The Declaration on Energy Choice & Competition, which calls on government leaders to protect everyone's right to produce, buy, or trade the clean, reliable energy of their choice, and remove barriers to energy competition. The Declaration will be presented December 12 at the Climate & Freedom Colloquium, a side event at the United Nations Climate Change Conference in Madrid, Spain, with hopes of reminding delegates that competitive power markets deliver more low- and zero-emission energy faster and cheaper than uncompetitive markets.

That might even be an understatement. Worldwide, expensive, monopolistic utilities fail to deliver reliable, affordable energy. Globally, 2.5 billion people must cook, heat, and light their homes by burning dung, coal, and garbage. In too many nations, because there's no reliable power, there's no hope for development. Competition offers a solution to these issues and all the ills that follow.

CABLs also leverage up return on equity. They attract every kind of investor to both the tax-exempt debt and the taxable equity. Easier to use and more broadly attractive than tax equity, CABLs allow low cost innovators to expand faster. Far more cost effective than conventional subsidies, they give up tax revenue where it is low (the average return on debt in the U.S. is 4 percent) and harvest it where it is high (the average return on equity is 13.6 percent). If we assume those returns for a new business financed with 50 percent CABLs, 50 percent taxable equity, then the IRS would take in 340 percent more tax revenue on equity profits than they forgo on the tax-exempt debt.

Unlike conventional subsidies, CTCs (including CABLs) create incentives for competition, innovation, and popular participation. They give an advantage to competitive markets, increase the incentives to open markets, and let investment flow from all kinds of investors, large and small.

Combined with clean free market policies, CTCs would beat a carbon tax. They correctly target key barriers to competition and innovation, and do so with no new taxes, direct government spending, or coercive regulation.