Syracuse Students Demand Punishment for Everyone Involved in Racist Speech, Including Bystanders

After a series of alleged hate crimes, activists say they don't feel safe on campus. 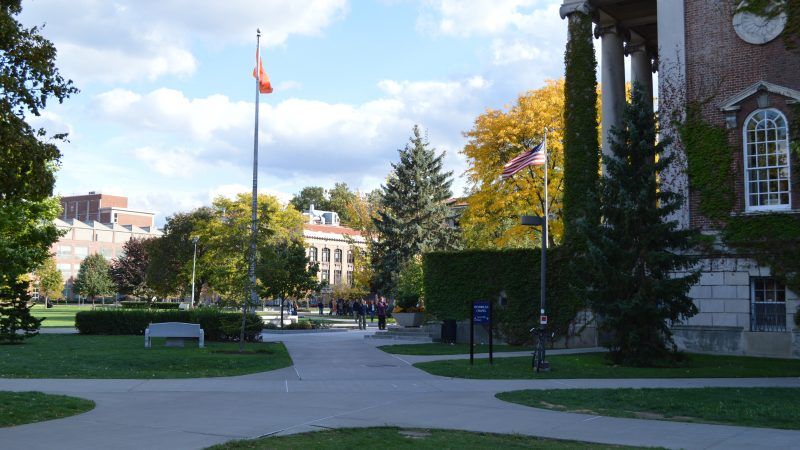 Over the course of the last month, a series of alleged hate crimes have rocked Syracuse University in New York. In response, student activists are demanding the resignation of the chancellor, Kent Syverud. They also want mandatory diversity training, more counseling services, and punitive action against everyone involved in racist speech—including "bystanders" who merely witnessed the events and said nothing.

"The safety of students on this campus—specifically the safety of underrepresented and underserved students—is paramount," wrote the leaders of #NotAgainSU, the student activist group.

The incidents began on November 7, when racist graffiti targeting Asian students was found on a campus building. This was soon followed by vandalism evincing animus against black students, Jewish students, and Native American students, according to Inside Higher Ed.

In only one case—fraternity members yelling a racial slur—were the perpetrators caught in the act. So students and administrators have no idea who is responsible for the graffiti. At least one incident was just a rumor (and perhaps an outright hoax): Last week, the campus went into lockdown mode when it was reported that someone was using AirDrop to send the Christchurch shooter's manifesto to student's iPhones. It turned out that no one had actually received the manifesto.

Students are understandably on edge, but some people seem to be blowing the danger out of proportion. Inside Higher Ed described the mood as one that "seemed to students like escalating threats and potential for violence":

Les Rose, a broadcast journalism professor, said he and other Newhouse professors volunteered to take shifts being in the lobby of the Newhouse building to reassure concerned students of their safety.

"It hurt my heart," Rose said. "I woke up at 2:30 a.m. on Tuesday night because I couldn't sleep—I was worried about what another racist idiot would do—and there's an email from a very concerned student of mine who didn't want to come to class. She was truly unnerved."

Students of color who participated in the protests say their mental health has deteriorated from mounting fear of being targeted on campus.

"Woke up feeling sad. Like many others over two weeks, I experienced a lot of pain," an Asian student who participated in the sit-in wrote on Twitter. "It's been a difficult experience, and one that constantly reminds in my head. I don't know how to explain it but it hurts. I hope those who cause this pain will be held accountable."

Gabby de Oliveira, a first-year student from Los Angeles who lives in Flint Hall, where a student wrote a hateful message directed at Native Americans, said she doesn't feel "completely safe." While many students have left campus early for the Thanksgiving break—the university is excusing their absences—de Oliviera cannot reschedule her flight.

Yet there is no evidence that anyone on campus is in danger. None of the incidents have involved violence. They could even be the handiwork of an aggrieved employee, or someone else with an ideologically unconnected agenda, rather than a secret racist intent on harming Syracuse's minority community.

But even if Syracuse's situation is as bad as it seems, the activists' demands are seriously flawed. Punishing anyone who so much as listens to racist speech without saying anything would be draconian, and it risks compromising the students' rights outlined by the school's code of conduct. (Meanwhile, activists have demanded that their own violations of that code—i.e., their occupations of campus buildings—go unpunished.)

#NotAgainSU also wants tons more money spent on diversity and anti-racism initiatives, including mandatory training for faculty and staff. And they have asked the chancellor to resign for refusing to meet all their demands. He had agreed with a mere "98 percent" of them, and as Syracuse.com reported, this wasn't good enough:

"The answer is I cannot right now in this room promise that every single word be on the response," he said. "I can listen to the concerns."

That response prompted hundreds of students, mostly dressed in black, to walk out of the event, chanting again, "sign or resign." The students moved their protest to outside the chancellor's residence nearby campus.

As they marched off campus and arrived at the chancellor's house, they continued to chant "sign or resign!" and to call for administrators' resignations.

For more about campus hate incidents and the responses by student activists, check out my book Panic Attack: Young Radicals in the Age of Trump.