Jennifer Aniston and Reese Witherspoon kill it as troubled television journalists in a changing media environment. 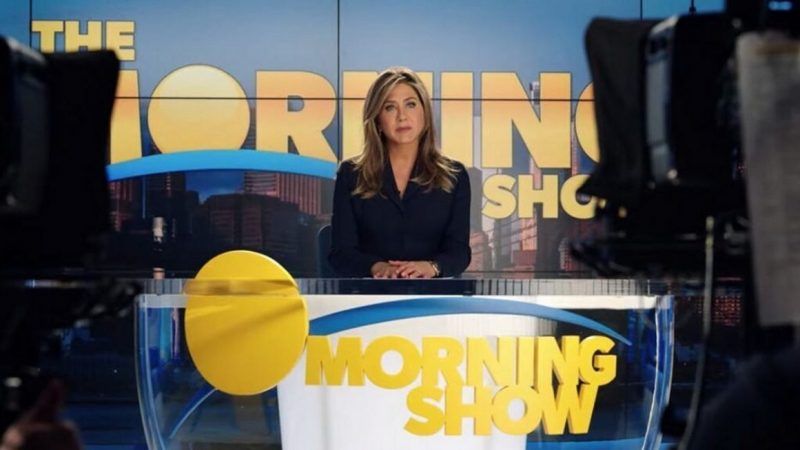 The Morning Show, the Jennifer Aniston-Reese Witherspoon series intended as Apple TV's blockbuster inaugural event, has been treated more like a bomb in many of the early reviews.

Some critics plainly made up their minds from the show's early production problems—a bunch of producers were ousted and, it was said, the storyline reworked substantially. Others bristle at the idea of Aniston as a dramatic actress rather than a comedienne. There's a Stalinist subtext that The Morning Show isn't sufficiently #MeTooish. And Apple executives believe at least some of the complaints stemmed from resentment of the company thinking it can make TV shows as well as Macs.

The Morning Show is high-voltage drama and big-time entertainment, a savage, scorching portrait of the TV news industry as a modern court of the Medicis where corporate genocide is coffee-break sport, where subordinates exist to be crushed and superiors to be sabotaged. It may not be exactly news that the most trusted men (and, these days, women) in America are anything but, but it's never been so convincingly demonstrated.

Modeled heavily (but not exclusively) on the 2017 scandal at The Today Show in which Matt Lauer lost his hosting job after accusations of sexual harassment, The Morning Show is drenched in the gender drama of today's television.

Aniston plays Alex Levy, a long-time co-anchor stunned by the abrupt pre-dawn firing of her partner Mitch Kessler (Steve Carell) on the grounds of sexual harassment.

And though Alex isn't implicated in any way in Kessler's misconduct, she quickly realizes her job is in peril anyway. The show's ratings have been slipping for years, and Cory Ellison (Billy Crudup of the film version of Watchmen), the newly arrived head of the network's news division, has a radically different vision of what the show should look like. In a world where everybody can track events on their cell phones as they happen, he thinks, TV news is an anachronism.

"The entire world of broadcast could fall off a cliff in just a few years," Ellison warns a subordinate. "What we really need on television right now, it's not news or fucking journalism, it's entertainment."

Enter Witherspoon's character, Bradley (Two Fucks) Jackson, a talented reporter who nonetheless has been wandering in the wilderness of small-town TV for a decade after uttering the F-word twice in the same stand-up report.

Her molten temper is still lethal. Covering a protest over coal, she grabs a pro-coal demonstrator by the shirt to deliver an anti-carbon tirade that's captured by somebody's cell phone and goes viral. Guess who sees it and considers it grandly entertaining?

Bradley's candidacy for a job at The Morning Show is complicated by the fact that much of the staff considers her not just a loose cannon but a phony whose coal meltdown was a publicity stunt staged for YouTube consumption.

Foremost among the skeptics is Alex, who confronts Bradley about the possibility that she's a fake during an on-air interview. Bradley retorts that the viral sweep of the video was not the result of calculation but a populist quest for authenticity among viewers: "I think they want to trust that the person who is telling them the truth about the world is an honest person … [lonnnng beat] like you." That's less an insinuation than an uppercut to the jaw. But Alex's riposte is no love-pat, either: "Good luck in Hamhock, Virginia."

The confrontations, conspiracies and—eventually—wary cooperation between Alex and Bradley are the diamond-brilliant heart of The Morning Show. The famous anti-chemistry between Aniston and Witherspoon when they played quarreling sisters in a 2000 Friends arc is still alive, albeit without the comic overtones.

Aniston, in her finest dramatic performance ever, plays Alex as a prickly bundle of fears, insecurities and loneliness, a woman whose wealth and fame as a 3:30-a.m.-wakeup morning-show host has come at the expense of family, romance or any other trappings of normal life.

Witherspoon's Bradley is no less troubled. Her family life—defined by a hard-to-please mom and a junkie brother, both of whom she must support—is a mess. Her professional life, even more so: Bradley's conviction that journalism should ignore balance in the pursuit of "truth" as the reporter sees it has kept her at odds with a series of producers and general managers.

And her perpetual Two Fucks fury has left her friendless even among the newsroom proles. "I AM fuckin' agreeable!" she shrieks across a parking lot after a producer suggests it would air her career to take it down a notch.

Like Aniston, Witherspoon has mastered the art of turning a repellent character into a transfixing presence. There really aren't any heroes or even likeable personalities, just a collection of corporate nightstalkers prowling the alley ways in search of a quick kill. It says something about the show's darkness that the closest thing to a sympathetic character may be Carell as the disgraced anchor Kessler, raging endlessly (and pointlessly) that somebody changed the rules of the game during the middle of his turn.