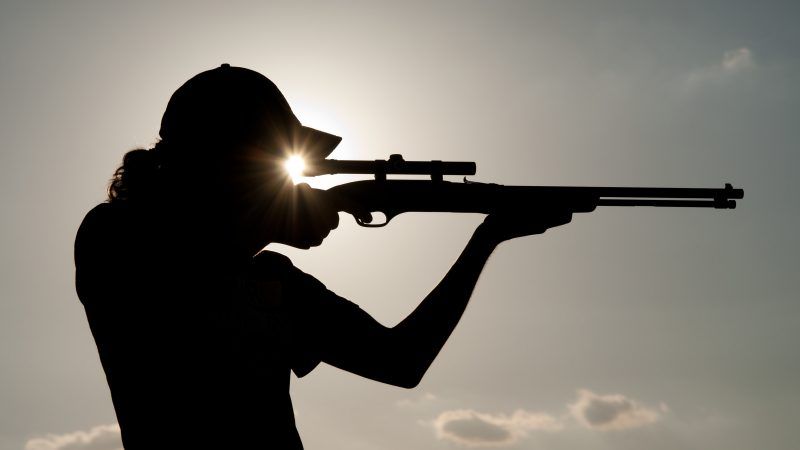 The phrase "Second Amendment sanctuary" is an umbrella term used to describe a jurisdiction that passes a resolution declaring that restrictive gun control laws another legislative body passes are unconstitutional and will not be enforced there. The concept is an adaptation of the immigration "sanctuary city" movement, in which some cities and counties (and now whole states) generally decline to ask residents about their immigration status or assist the federal government in enforcing immigration laws. The resolutions can vary, but generally, Second Amendment sanctuaries refuse to dedicate resources to enforcing things like "red flag" laws and bans on certain weapons.

"This draws a line in the sand. It doesn't mince words. And I hope it sends a message to what can be described as the authoritarian control freaks," said Lake County, Fla., Commissioner Josh Blake (R) when Lake County leaders voted on Nov. 5 to become Florida's first Second Amendment sanctuary. "[They] see it as their jobs to forcibly disarm their fellow citizens, and with all due respect, that won't be happening in Lake County," Blake added, referencing former Democratic presidential candidate Beto O'Rourke's infamous, "Hell yes, we're going to take your AR-15, your AK-47," line.

Second Amendment sanctuaries are still a relatively new phenomenon, but the idea has caught on quickly within the gun community. The first Second Amendment sanctuary county-wide movement emerged last year after the election of Illinois Gov. J.B. Pritzker (D) allowed Democrats to propose sweeping gun reform in the state legislature without fear of their bills getting vetoed. Some of the proposed measures included raising the state's minimum age for firearm ownership from 18 to 21 and prohibiting civilian ownership of certain types of weapons and body armor. These measures prompted Effingham County in southern Illinois to pass a resolution declaring all of the Democrats' proposals unconstitutional. Thus was the Second Amendment sanctuary movement born.

Some solidly red states, like Alaska, Idaho, Wyoming, and Kansas, had already passed state-wide measures declaring that the states will not comply with any federal gun laws that they view as unconstitutional before the movement officially began. For example, Idaho's 2009 resolution specifically opposes the establishment of a federal gun licensing procedure.

But, since Effingham County's declaration, the movement has gained support in local communities across 19 states. In more liberal states, Second Amendment sanctuary legislation is being passed at the county level, and even the city level, such as in Needles, Calif.

Many proponents of the Second Amendment sanctuary movement cite a cultural disconnect between their cities and their rural communities in deciding to join the movement. When Florence County became Wisconsin's first sanctuary county on Nov. 12, Florence County Sheriff Dan Miller told the Milwaukee Journal Sentinel that the measure, "sends a message that all of Wisconsin is not exactly the same. We have some different beliefs up north. We tend to be a little more conservative. We like our guns. We believe in God." Similarly, Virginia gained five new sanctuary counties in the southern, more rural, parts of the state when Democrats took control of the state's legislature earlier this month and promptly began proposing gun control legislation.

It is important to note that these resolutions do not carry the force of law. As Virginia House of Delegates member Ken Plum (D–Reston) points out, "[t]he notion that you can have a locality void a state law by declaring yourself a sanctuary simply is not going to hold up in court." But laws, at the end of the day, need somebody to enforce them, and many sheriffs and police officers in counties where Second Amendment sanctuary resolutions have been passed support their communities' decisions, or at the bare minimum, aren't willing to stringently enforce the legislatures' laws. Again, immigration sanctuary cities are a good parallel for understanding this phenomenon, as are state decisions to legalize marijuana despite federal prohibition. State and federal laws cannot be effectively enforced by only state and federal law enforcers. Cops and local sheriffs who make laws they don't like their lowest priority aren't doing anything illegal, but their decision effectively nullifies the laws in question for all but the boldest and biggest law-breakers.