At tonight's debate, Gabbard continued her laser-like focus on the need to end America's overseas wars. 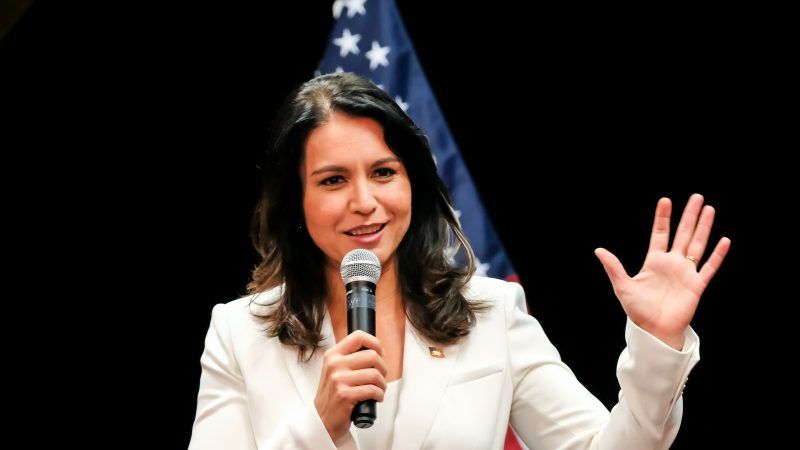 Rep. Tulsi Gabbard (D–Hawaii) continued her laser-like focus on foreign policy at tonight's Democratic debate, criticizing her own party's record on war, and tussling with Sen. Kamala Harris (D–Calif.) over her vision for a less interventionist posture abroad.

"The Democratic Party is not the party of, by, and for the people," Gabbard said in response to a question about her criticism of the Democratic party. "It's a party that has been and continues to be influenced by the foreign policy establishment… by the military-industrial complex and other corporate interests."

Gabbard said that, if elected president, she would refrain from continuing the "Bush-Clinton" foreign policy legacy of waging war to change political regimes abroad.

In a moment of manufactured drama, debate moderators prompted Harris to clap back at Gabbard. Harris said that Gabbard "buddied up to Steve Bannon to get a meeting with Trump," adding, "She failed to call a war criminal what he is, a war criminal," Harris said in what was likely a reference to Gabbard meeting with Syrian President Bashar Assad.

These debate stage attacks, according to Gabbard, are evidence that Harris would deliver more of the same when it comes to foreign policy.

Harris' answers "only makes me guess she as president will continue the status quo regime-change wars," Gabbard said, adding that as president, "I am not going to put party interests first."

The Hawaiian representative suggested that the trillions government has spent fighting wars overseas should have been spent on domestic priorities like hospitals and infrastructure—not given back to taxpayers who could spend it on their own priorities.

Still, as America's wars in Afghanistan and the Middle East grind on, it's valuable to have a candidate who effectively and frequently criticize the costs, in dollars and lives, these interventions impose on Americans.