The senator from Massachusetts thinks more Americans should join the military. Why? 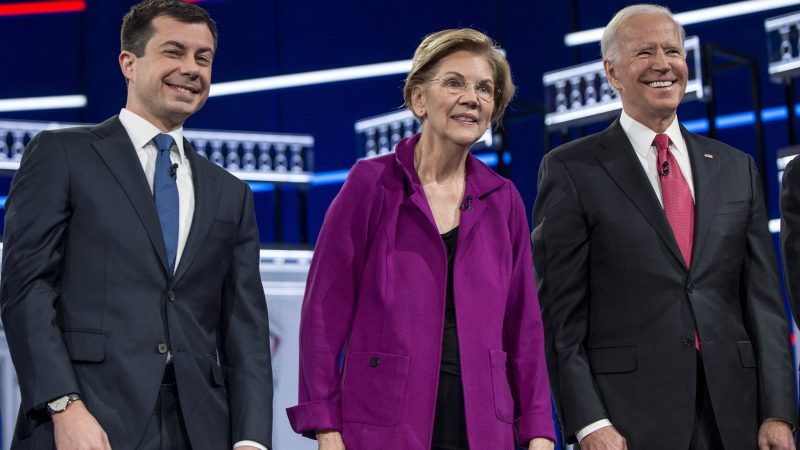 When asked during the debate whether more Americans should serve in the U.S. military, Sen. Elizabeth Warren (D–Mass.) gave a resounding yes.

But Warren didn't stop there: She also recalled her brothers' service in the U.S. armed forces and described the experience as one that brings people together. She then seemed to recall her mother waiting for letters from her soldiering sons—letters that might have contained terrible news about what had happened to them—with what sounded like nostalgia.

While I may have misinterpreted Warren's tone, the memory she described it not one any American wants to experience for themselves if they don't absolutely have to. It is incumbent on the next president to reduce American military commitments, to leave less of a boot print on the rest of the world, and to radically decrease the likelihood that American mothers will check their mail every day waiting for news of their children's death.

It was undoubtedly an awkward answer for Warren, who is typically sharply focused on her domestic agenda. In one sense, she was copying South Bend Mayor Pete Buttigieg, who has similarly called for more national service. But Warren was specifically promoting military service, and sounded bizarrely ambivalent about the emotional trauma endured by families whose children were in danger of dying in war.

It's possible she misspoke, or didn't mean it the way it sounded. But in any case, her answer was a strong reminder that while Warren is certainly a progressive on domestic issues, when it comes to foreign policy she ranges from an unknown to a moderate hawk. She has not staked out nearly as many anti-interventionist positions as her domestic ideological ally Sen. Bernie Sanders (I–Vt.). Her ideal vision of government is more people depending on it and serving in it—and, it would seem based on her answer tonight, fighting for it.