Elizabeth Warren Gives Up on Medicare for All

By planning to pass single-payer in year three of her presidency, she’s acknowledging it will never happen at all. 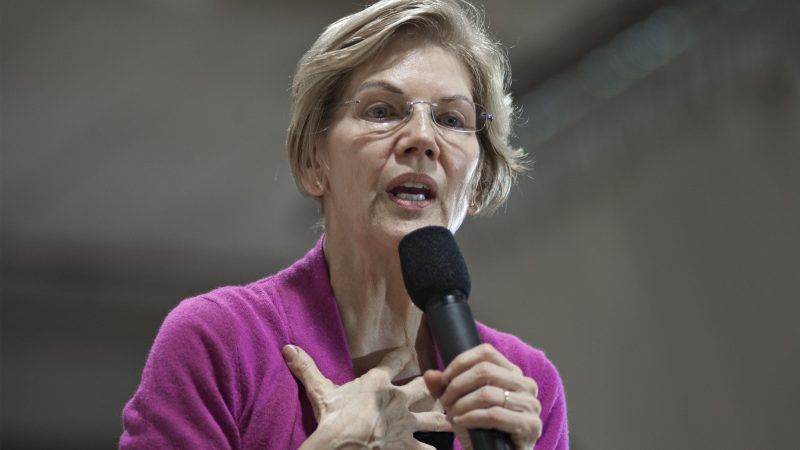 Elizabeth Warren has given up on Medicare for All.

Technically she still supports a single-payer system that would outlaw most private health insurance and charge the federal government with financing virtually all of the nation's health care. But less than a month after releasing a half-baked plan to finance single-payer, the Massachusetts Democrat released yet another plan—an implementation timeline that calls for passing full-fledged Medicare for All in year three of her presidency.

That is not a plan to pass Medicare for All; it is an acknowledgment that it will never happen.

Modern presidents tend to have precious little time to pass big-ticket legislation—typically just a year or two after coming into office. After that, they face midterm elections, which tend to reduce the number of congressional seats a new president's party controls, and then the long, slow slog of a re-election campaign, during which point the legislative process slows to a halt. Major bills, like Obamacare or the GOP's 2017 tax law, tend to happen at the beginning of the timeline, or not at all.

Medicare for All, as envisioned by Elizabeth Warren and her rival for the Democratic presidential nomination, Sen. Bernie Sanders (I–Vt.), is the biggest of big-ticket legislation. It's a $20 trillion plan under Warren's laughably generous assumptions and, more realistically, a $30 or $40 trillion overhaul of both American health care and government, which under Medicare for All would become essentially the same thing. The political challenges alone would make it exceptionally difficult to pass in year one of a presidency, even with both chambers of Congress controlled by a Democrat. It is all but impossible to imagine it passing in year three of a Warren presidency.

Tellingly, Warren would use her first year to pass a public option that offers tax-funded health care to children and lower-income households, while allowing others to buy into the system. She argues that under Senate rules, it could be passed with a simple majority, avoiding the complications of the filibuster.

This is much closer to the comparatively moderate plans offered by Warren's centrist-lane rivals, former Vice President Joe Biden and South Bend, Indiana, Mayor Pete Buttigieg—plans Warren has derided as being compromised, the sort of ideas that could only be proposed by a weak politician afraid of big structural change. Now Warren is proposing her very own compromise.

In theory, this is a form of savvy political hair-splitting that allows her to solve a problem that has bedeviled Democratic candidates all year long: Progressives, especially Sanders supporters Warren believes she needs to win the nomination, demand a candidate who backs Medicare for All, but many moderate Democrats are wary, and single-payer could prove disastrous in the general election. Warren is trying to split the difference by supporting a starter plan that could pass without 60 votes in the Senate while still nominally paving the way for Medicare for All to follow.

In practice, however, it signals to committed progressives that she's not serious about single-payer, and that she won't make it a priority. Sanders has already taken note, warning that "some people say we should delay that fight [for Medicare for All] for a few more years," and pledging to introduce a Medicare for All bill during week one of his presidency.

At the same time, Warren's support of a delayed timeline for single-payer leaves her open to attacks by Democratic party moderates—not to mention Republicans—that she still supports eliminating private health insurance, not to mention an enormously expensive plan put government in charge of health care. It's an attempt to have it both ways that is likely to please no one at all.

One irony is that Warren never wanted her campaign to revolve around health care. That's why she resisted spelling out the details for months, preferring to jump on Sanders' Medicare for All bandwagon by saying she was "with Bernie." But the issue became a trap for her, as it was earlier in the year for Sen. Kamala Harris (D–Calif.), whose numerous health care policy stumbles helped drag down her campaign.

Indeed, single-payer has become a weight on Democratic campaigns, with Democrats campaigning for 2018 House seats on Medicare for All performing 5 points worse than those who did not. No wonder Democratic Speaker of the House Nancy Pelosi is skeptical.

Warren is clearly hoping that her bank of plans and counter-plans will be enough to muddle the issue and make it go away. As The New York Times reported over the weekend, she rarely talks about health care on the stump, and doesn't talk up single-payer legislation when asked about her priorities.