The presidential campaign seems to be Warren's priority, despite the fact that she's being paid to represent the residents of Massachusetts in the U.S. Senate. 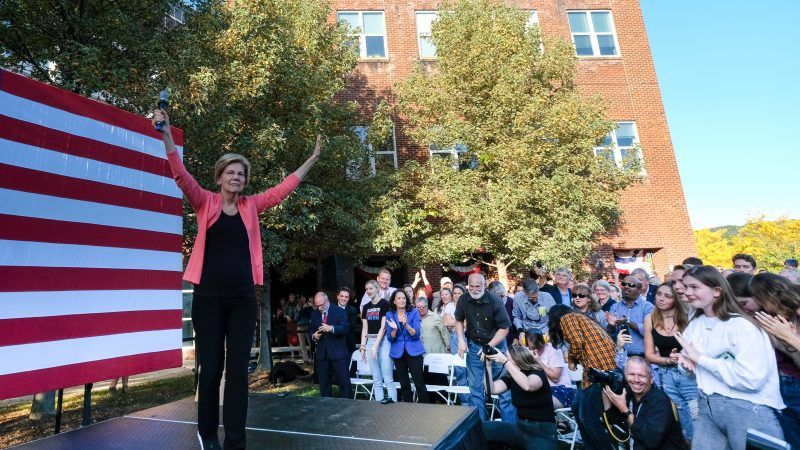 As a United States senator from Massachusetts, Elizabeth Warren is earning $174,000 a year. The least she could do is show up for work.

Instead, Senator Warren's recent absenteeism has me—a Boston resident and biographer of Samuel Adams—upset about what Adams might have recognized as a twist on taxation without representation. If Warren doesn't bother to vote, her constituents, including me and millions of other citizens of the Bay State, are effectively deprived of a say in the Senate.

That's exactly what has been happening. The first two weeks of November, there were 14 roll call votes in the Senate. Warren was absent for each and every one. Nor was this phenomenon limited to November. There were four roll call votes on October 31; Warren didn't show up for a single one of those, either. She's missed at least the past 23 votes in a row. According to ProPublica, she's missed more than four out of every ten votes this year. According to GovTrack, she missed 70.2 percent of the votes from July through September of 2019 and has missed 95.3 percent of the votes in October and November of 2019.

Sens. Bernie Sanders (I–Vt.), Cory Booker (D–N.J.), and Kamala Harris (D–Calif.), who are also running for president, have also missed a lot of votes, but that's not my problem. They aren't my senators. It must be said, too, that Sens. Michael Bennet (D–Colo.) and Amy Klobuchar (D–Minn.) either take their responsibilities as senators more seriously than Warren does or they take their presidential campaigns less seriously than she does. Whatever their motives, Bennet and Klobuchar have been better about showing up for the work they were elected to do.

If Warren isn't willing to take that step voluntarily, the governor of Massachusetts, Republican Charlie Baker, could try offering her some incentives by promising to fill Warren's seat by appointing a Democrat until a special election can be held. Baker could appoint his own predecessor as governor, Deval Patrick, who might agree in return to end the presidential campaign that could siphon votes from Warren in New Hampshire. Or Baker could appoint the man Patrick appointed to fill John Kerry's seat, Mo Cowan, who is widely liked and respected on both sides of the aisle. Or Baker could appoint Rep. Joe Kennedy III (D–Mass.), a former student of Warren's who has endorsed Warren's presidential campaign and who has also announced plans to challenge the other senator from Massachusetts, Ed Markey.

Some might complain that it's a double standard to expect Warren to resign from the Senate to seek the presidency. After all, President Trump campaigns for re-election while also serving as president. If it's okay for Trump to do two jobs simultaneously—president and presidential candidate—why isn't it okay for Warren to do the same?

The executive function is different from the legislative function. Trump can delegate certain tasks to his vice president or cabinet members. But only a senator can vote in the Senate. Warren's chronic absenteeism demonstrates that she's not taking that responsibility seriously. Sure, she's way more left-wing than I am, but even if I don't necessarily agree with how she'd be voting, I'd still like my state to be represented.

The issue is all the more acute given that the Senate may soon be pressed into function as, in essence, a jury deciding whether to convict the president in an impeachment proceeding. How is Warren—or, for that matter, Sanders, Booker, Harris, or the rest of them—supposed to serve as an impeachment juror while also campaigning for the president's job? The competing time demands will be hard to manage, and it makes it even harder to take an impeachment trial seriously when six of the 100 jurors are announced presidential candidates hoping to oust Trump through the electoral process.

Warren got elected in 2018 in part on the basis of a pledge to be a full-time senator. "Warren: I'll serve my full Senate term if reelected," was the headline Politico put over a 2018 news article that began, "Elizabeth Warren said she would serve her full six-year term in the Senate if reelected in November." The article quoted Warren as saying, "I am not running for president of the United States. That's my plan." The senator wasn't pressed on the definition of "serve," but, as a Massachusetts voter, I certainly didn't imagine that by "serve" she meant she'd miss so many of the votes.

It's one thing if a politician falls ill or has pressing family obligations that require missing work. But Warren has decided to spend months interviewing for a job other than the one that she currently has.

Ultimately, the decision on whether to stay in the Senate or resign while seeking the presidency is Warren's to make. But as one of the people she's ostensibly representing, I'd sure prefer someone who treats it as a full-time job by showing up when it's time to vote.