Can't buy it? That's okay, you can easily get the pieces to build one yourself. 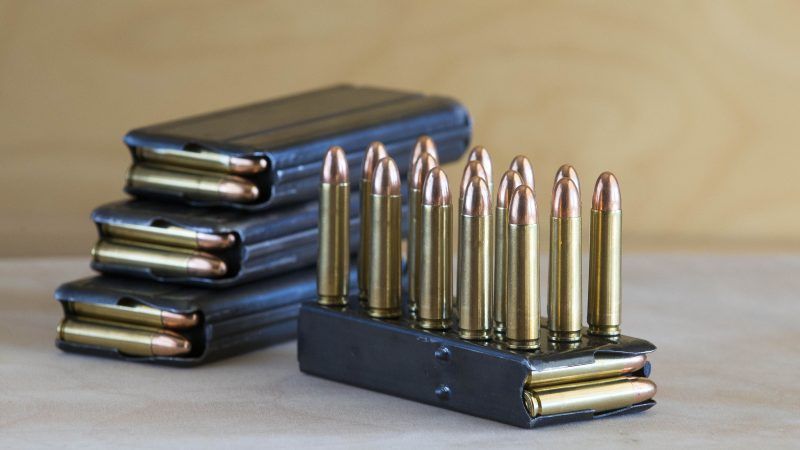 An unintended loophole in a Colorado gun control bill illustrates what happens when lawmakers legislate technology they don't understand: Firearms owners find a way to work around the law without breaking it.

In 2013, the Colorado legislature passed House Bill 13-1224, which prohibits the "sale, transfer, or possession of an ammunition feeding device that is capable of accepting, or that can be readily converted to accept, more than [15] rounds of ammunition or more than [8] shotgun shells (large-capacity magazine)." This was a year after James Holmes used a semiautomatic rifle equipped with a 100-round drum magazine (among other weapons) to kill 12 people in a movie theater in Aurora, Colo. The bill grandfathered in old large-capacity magazines that gun owners already had in their possession but forbade new sales or transfers. Then-Gov. John Hickenlooper (D) signed the bill into law on July 1. The law was intended to erase the market for new large-capacity magazines.

However, some gun dealers noticed that the bill made no mention of magazine components and capitalized on the omission. Dealers throughout the state began selling "parts kits" that contain everything a gun owner needs to assemble their own large-capacity magazine at home. In fact, some gun stores throughout the state now sell magazines only in parts kit form.

This phenomenon became so widespread that a local Colorado news agency, 9NEWS, decided to conduct undercover visits to local gun stores in six counties. 9NEWS reports that in 7 of the 10 stores the outlet visited, "employees at one store after another offered to sell a large-capacity magazine disassembled in parts" to their "9Wants to Know" investigative journalism team.

Among the stores that don't sell parts kits are two chains, Sportsman's Warehouse and Dick's Sporting Goods. It comes as no surprise that Dick's is embracing the spirit of the ban since the company's CEO, Edward Stack, recently revealed that Dick's destroyed $5 million of its own inventory of "assault weapons" in hopes of preventing mass shootings.

On the other hand, many local dealers have opted to exploit the loophole. "As soon as we remove the functionality of it and take this spring out, it's no longer a magazine," one salesman said pointing out how the terminology of the bill allows them to do this. "[A] monkey could put it back together again," a different salesman tells 9NEWS.

"I'm a little stunned about how open it is and how blatantly they're saying, 'You know, this is a stupid law, but this is the way you can get around it,'" state Sen. Rhonda Fields (D–Aurora), one of the bill's sponsors, told 9News. "The whole goal, when I ran the bill in 2013, was to limit that capacity."

Some stores aren't even making an attempt to comply with Colorado's flawed magazine ban. Two of the 10 stores 9NEWS visited operated "as though the ban did not exist."

"We're a sanctuary county, we don't give a f—. We just sell everything as is, preassembled," an employee at Family Firearms Sales, a gun store in Colorado Springs told 9NEWS. Another employee at Tacticool Arms in Weld County openly admitted the store continues to sell preassembled 75-round drum magazines. "Our sheriff has openly stated he does not agree with the magazine ban, he believes it's unconstitutional and will not enforce it," claims the employee.

Weld County Sheriff Steve Reams, while stating that enforcing the magazine ban isn't a top priority for his department, denies opposing the magazine ban and said that he will "probably have a conversation with [the Tacticool employee] and talk about [his] business practices" after 9NEWS brought this to his attention.

Colorado's large-capacity magazine ban isn't the only example of gun regulation that has failed. For example, take President Donald Trump's attempt to ban bump stocks, a firearm accessory that essentially harnesses a gun's recoil to increase its rate of fire. After Trump issued an executive order requiring Americans to surrender their firearm accessories or risk being in violation of federal law, the Bureau of Alcohol, Tobacco, Firearms, and Explosives collected fewer than 1,000 bump stocks out of an estimated 280,000-500,000 in circulation. The overwhelming majority of bump stock owners decided to take their chances.

Similarly, when New Jersey imposed a 10-round limit on magazines in the state and mandated that any existing large-capacity magazines be surrendered last year, "approximately zero" of New Jersey's 1 million gun owners decided to turn them in, reported Reason's Jacob Sullum.

Between exploitation and blatant disobedience of Colorado's existing magazine ban, it doesn't look like large-capacity magazines are going anywhere anytime soon in the Centennial State. In fact, Colorado's Supreme Court heard arguments concerning the constitutionality of the state's large-capacity magazine ban yesterday, meaning a repeal of this broken law is a possibility. Even if the ban doesn't get overruled, as Reason's J.D. Tuccille notes, American gun owners' usual response to arbitrary gun prohibition has been, "Molon labe," or simply, "come and take them."