U.S. Diplomat Bill Taylor: It Was 'Crazy' To Freeze Aid to Ukraine 'for Help With a Political Campaign'

GOP House members, meanwhile, continue to push back against witnesses who say Trump broke the rules. 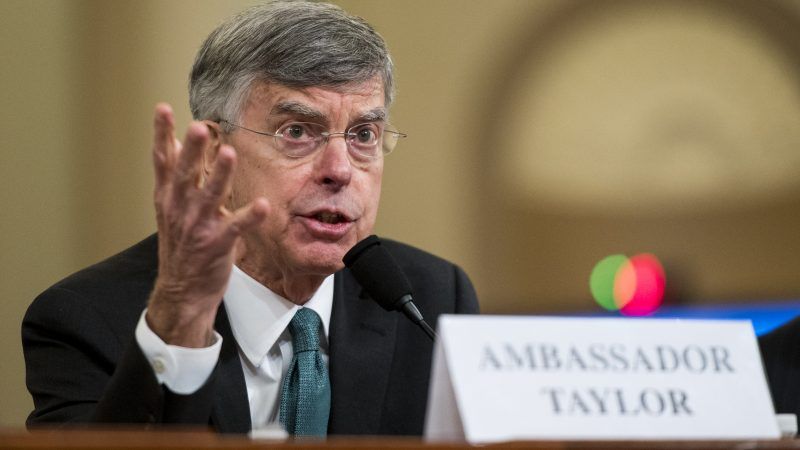 American diplomat William B. Taylor, the chargé d'affaires in Ukraine, told congressional investigators during his impeachment inquiry testimony on Wednesday that both a White House meeting and the release of a military aid package to the country were contingent on Ukrainian President Volodymyr Zelenskiy publicly pursuing anti-corruption probes sought by President Donald Trump.

Taylor testified that Gordon Sondland, the ambassador to the European Union, relayed that "everything" was dependent on Zelenskiy's announcement that he would both investigate former Vice President Joe Biden and his family, and look into a theory that Ukraine intervened in the 2016 election to benefit former Secretary of State and Democratic presidential candidate Hillary Clinton.

Taylor also detailed a conversation he had on Friday, November 8, with David Holmes, the counselor for political affairs at the U.S. embassy in Ukraine. Taylor says that Holmes told him he had been privy to a July 26 conversation between Trump and Sondland. On that call, a day after the much-discussed exchange between Zelenskiy and Trump, the president asked the E.U. ambassador where he was with "the investigations." The Ukrainians were "ready to move forward," Sondland allegedly replied.

The ambassador then told Holmes "that President Trump cares more about the investigations of Biden, which [Rudy] Giuliani was pressing for," referring to the president's personal lawyer. Holmes is set to testify this Friday.

In Taylor's opening statement, he stressed what he saw as the vital importance of the $400 million in security aid to Ukraine, which was appropriated by Congress to help the Eastern European country fend off Russian military aggression. "It's crazy to withhold security assistance for help with a political campaign," Taylor said.

Daniel Goldman, counsel for House Democrats, asked Taylor, who was appointed to be the ambassador of Ukraine under former President George W. Bush, if he had ever experienced another time when aid was blocked over "personal or political interests of the president of the United States."

Also testifying was George Kent, the deputy assistant secretary of state for European and Eurasian affairs, who told investigators that the notion that Ukraine interfered in the 2016 presidential election on behalf of Clinton is not substantiated. "It's amply clear" that it was Russia that intervened, he said.

On the subject of Hunter Biden's involvement on the board of the Ukrainian energy company Burisma, Kent said he reported his reservations to the office of the Vice President that there might be "the perception of a conflict of interest." When asked about then-Vice President Joe Biden's successful attempt to depose a prosecutor in Ukraine, Kent told Goldman that there is no evidence to support the idea that he did so to assist his son. Trump has accused Biden of intervening to help the younger Biden avoid any potential probe of Burisma, despite the fact that several international agencies lobbied for the prosecutor's removal on corruption accusations.

"To your knowledge is there any factual basis to support [Trump's] allegations?" Goldman asked.

"When Vice President acted in Ukraine, did he act in accordance with official U.S. policy?" Goldman asked.

In his line of questioning, Steve Castor, counsel for House GOP, sought to characterize allegations of Ukrainian corruption—both during the 2016 election and in Burisma—as valid and worthy of exploration apart from any explicit reward Trump stood to gain. During one exchange, he repeatedly pressed Taylor to admit that he "certainly could appreciate President Trump's concerns" about Ukrainian election interference.

"I don't know the exact nature of President Trump's concerns," Taylor said, adding that he "was surprised by them."

Castor also portrayed Hunter Biden as unqualified for the role he held at Burisma, asking Taylor if he felt he had the proper experience to work at the energy company.

"I believe that companies build their boards with a variety of reasons in order to promote their business plans," Taylor replied.

When Republican representatives took their respective turns probing the witnesses, they coalesced around two primary points: that Taylor and Kent could have both separately misheard and misunderstood all of their exchanges with those in Trump's circle, and that, since the aid was eventually released without Ukraine investigating Biden, there was a quid—but no quo.

Rep. Mike Turner (R–Ohio) cast the conversations as hearsay, although the statements relayed during testimony on Wednesday would not qualify as such. "If I'm sitting here and I overhear your conversation right in front of me, I have heard it," explained CBS legal analyst Rikki Klieman, "so when I repeat your words this is something I've perceived with my own ears, the same way as if I saw something. So we're getting the legal terms into this mismatched."

"Those two things didn't happen, so you had to be wrong," he said.

"The other thing that happened when that assistance was on hold," Taylor replied, "was that we shook the confidence in our reliability."