"Your statement is defamatory, and we demand that you retract it immediately," Gabbard's lawyer wrote in a letter. 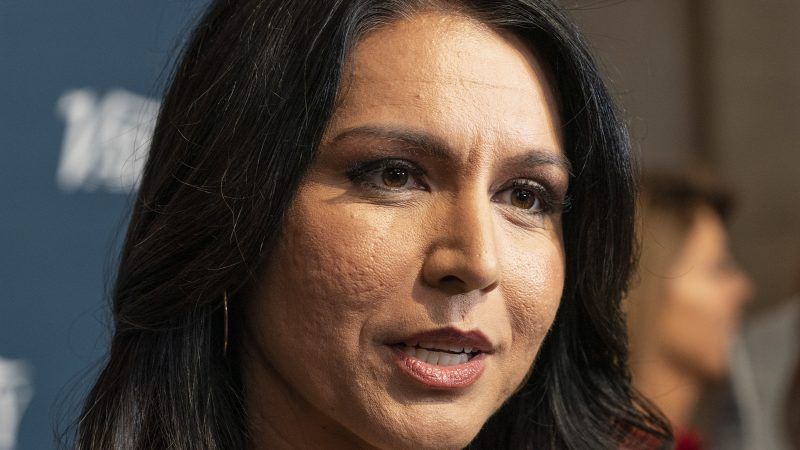 Rep. Tulsi Gabbard (D–Hawaii) has made quite the impression as she attempts to secure the Democratic presidential nomination. Her efforts were unwittingly elevated by former Secretary of State Hillary Clinton, who recently appeared to liken Gabbard to a "Russian asset." The congresswoman is now threatening Clinton with a defamation lawsuit over that statement.

"Your statement is defamatory, and we demand that you retract it immediately," Gabbard's attorney said in a letter to Clinton, urging that the 2016 Democratic candidate post the retraction to Twitter and disseminate it to CNN, Fox News, MSNBC, The New York Times, The Wall Street Journal, and The Washington Post.

"In making the statement, you knew it was false. Congresswoman Gabbard is not a Russian asset and is not being groomed by Russia," the letter said. "Besides your statement, no law enforcement or intelligence agencies have claimed, much less presented any evidence, that Congresswoman Gabbard is a Russian asset. This fabricated story is so facially improbable that it is actionable as defamation."

While Clinton's allegations were certainly odd, they are nowhere near the threshold for illegal slander, making this nothing more than political grandstanding. That's particularly apparent in that, while Clinton did speculate that a third-party run was imminent for Gabbard, it would come at the behest of Republicans—not the Russians. And while Clinton did drop a name, it wasn't Gabbard's.

"They are going to do third party again," said Clinton in a conversation about GOP strategy in the 2020 election with David Plouffe, a former campaign manager for Barack Obama. "I'm not making any predictions, but I think they've got their eye on someone who is currently in the Democratic primary and are grooming her to be the third-party candidate. She's a favorite of the Russians and they have a bunch of sites and bots and other ways of supporting her so far. That's assuming Jill Stein will give it up, which she might not because she's also a Russian asset."

When a CNN reporter sought to confirm that Clinton was referring to Gabbard, Clinton spokesperson Nick Merrill responded, "if the nesting doll fits." But Merrill also clarified that Clinton said it is the GOP that is "grooming her." That makes far more sense in the larger context of the conversation between Clinton and Plouffe. It also lines up with a certain public perception of Gabbard, who has been maligned by the left for her regular appearances on right-leaning Fox News programs.

How could such comments by Clinton possibly amount to defamation, which requires someone to circulate a "false statement of fact" with malice or negligence for the sake of harming another's reputation? In my view, Clinton's comments amount to nothing more than silly, unfounded speculation. Never did she claim that Gabbard is a pro-Russian traitor.

Even so, it's understandable why Gabbard would take issue with the remarks, which were presented without concrete evidence. But ill-founded criticism is not the same thing as illegal speech.

Regrettably, Gabbard's understanding of how the First Amendment works seems equally shaky across the board. In July, for example, she sued Google for violating the First Amendment after it suspended her advertising account for a few hours following June's initial Democratic debate. The company alleges that her wave of support temporarily triggered an anti-fraud freeze; she accuses the company of bias and of trampling her free speech rights. Perhaps she has good reason to be upset, but the First Amendment protects her against government censorship, not from the business decisions made by private companies.

In this case, if Gabbard had her way, all sorts of overheated political rhetoric could become subject to costly defamation suits. I fundamentally oppose Clinton's unsupported political finger-pointing, including her blurb about Gabbard. But the irony surrounding Gabbard's counterclaim is difficult to ignore: It sounds less compatible with American society, and perhaps more suited to that of Russia.