Vape Shops May Be Excluded From Ban on Flavored Vaping Products

Plus: Buttigieg just behind Warren in Iowa, sex work in Scotland, anger in Russia, Trump impeachment news, a call for regulatory reform, and more... 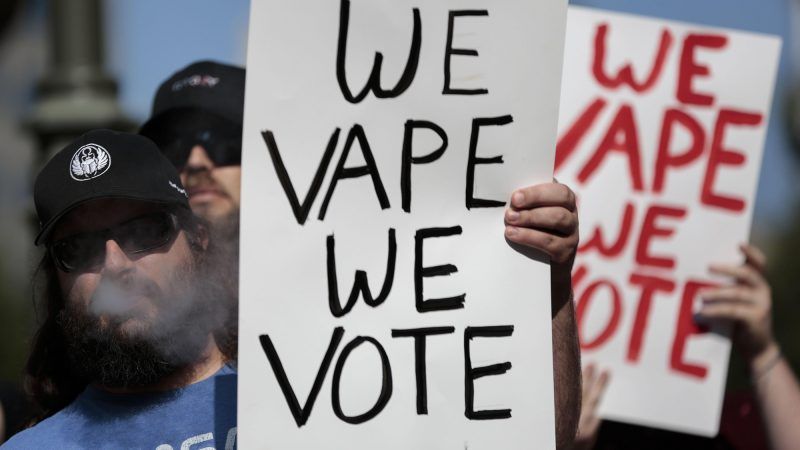 There's hope for mango, cucumber, and creme Juul pod lovers yet. Vape shops may be exempt from the expected restrictions on flavored vaping products.

Talking to reporters Wednesday, presidential advisor Kellyanne Conway suggested that a pending crackdown on flavored vaping products would not include menthol after all—and that certain sorts of vape products and retailers could avoid flavor sales restrictions entirely.

Conway pointed out that the Department of Health and Human Services (HHS) and the Food and Drug Administration (FDA) have prerogative "over cigarettes and e-cigarettes under the Tobacco Control Act" but "do not have jurisdiction over vaping and vape shops." (Update: read Jacob Sullum on how the FDA disagrees.)

While "vaping" and "e-cigarettes" are often talked about interchangeably, Conway's comments suggest that the Trump administration may not see it that way—and could allow different rules for products considered e-cigarettes and those considered vapes.

"If we're talking about e-cigarettes, the president, yes, he's been discussing this with his team, and he will, or HHS will, make an announcement soon," Conway said.

Restrictions on all but tobacco- or menthol-flavored vaping products would be disappointing (and pointless). But as Bloomberg notes, Conway's comments represent "a softening of a plan announced by HHS Secretary Alex Azar in the Oval Office in September, when he said menthol, mint and every flavor other than tobacco would be banned."

Conway indicated that menthol would be allowed. But mint would still be in the off-limits category, along with such popular flavors as vanilla, mango, and cucumber.

So that's where we're at now: Federal officials are parsing the difference between menthol and mint flavoring.

My hope is that this is an acknowledgement that vape shops should continue to exist and sell reduced-risk nicotine products to adult smokers. If there is an exemption for vape shops, I think the administration has acknowledged the political and policy importance of preserving vaping for adults.

Read Reason's Jacob Sullum for more on the ridiculous vaping panic, what the data really say, and what the FDA is poised to do regardless.

Russians are growing more dissatisfied with their government, according to new research from the Carnegie Moscow Center and the Levada Center. "The number of Russians wanting 'decisive, large-scale' changes has risen for the second consecutive year," reports The Moscow Times. In this year's survey (conducted in July), the figure was at 59 percent, up from 57 percent in 2018 and 42 percent in 2017. More:

Some 53% of the respondents said only serious reforms to Russia's existing political system could bring about the needed changes. Another 34% said the changes are possible within the existing system, according to Carnegie and Levada's research….

Respondents were more likely to name state bureaucrats as most resistant to change (69%), followed by oligarchs and big business (67%) and President Vladimir Putin (25%).

There is no better remedy for abuse of market power than an entrepreneur with a competing technology. The nation needs a new, bipartisan commitment to regulatory reform. https://t.co/l7TmERjL1d (via @RegulationMag) pic.twitter.com/exCbCyjKsU

Lessons from sex workers in Scotland and New Zealand. Advocates against prostitution decriminalization often argue that removing criminal penalties would enrich "pimps" at the expense of "prostituted women."

But "in comparing sex worker experiences in Scotland and New Zealand, women working in a decriminalised context were much more able to access health, safety and support," says the Scotland-based researcher Anastacia Elle Ryan. And "most importantly," they had "access to justice as they were protected by the law."

Giuliani says his Ukraine work was all about clearing Trump's name. President Donald Trump's messaging about Ukrainegate has centered on the claim that he was merely trying to ferret out corruption, ensuring that U.S. aid to Ukraine wasn't fueling improper activity. In other words, a perfectly legitimate policy interaction.

Meanwhile, here's what the president's personal lawyer has to say about it:

The investigation I conducted concerning 2016 Ukrainian collusion and corruption, was done solely as a defense attorney to defend my client against false charges, that kept changing as one after another were disproven.

In other Ukraine/impeachment news, Trump reportedly wanted Attorney General Bill Barr to hold a press conference saying Trump didn't break the law in his conversation with the Ukrainian president. The press conference did not materialize.

And here's what we're looking at in the House impeachment investigation next week:

Next week, the House Intelligence Committee will hold its first open hearings as part of the impeachment inquiry.

On Wednesday, November 13, 2019, we will hear from William Taylor and George Kent.