Yes, Trump (and everybody else) has a right to face their accusers when they’re charged with crimes. But that hasn’t actually happened. 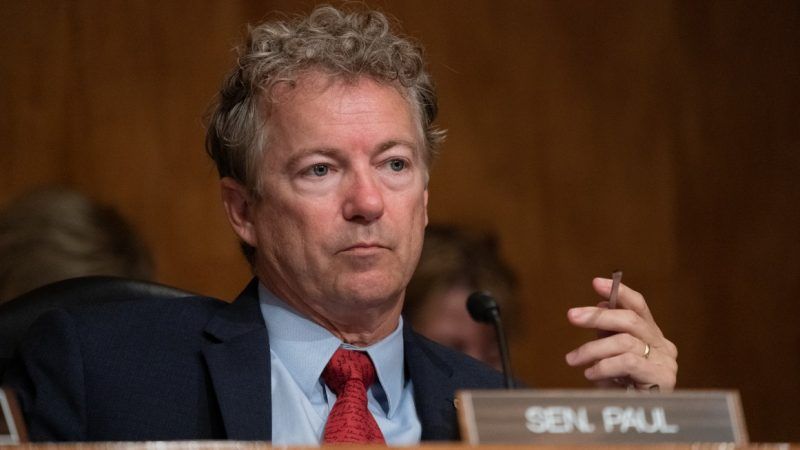 Sen. Rand Paul (R–Ky.) has proposed legislation that would protect whistleblowers from retaliation but that would also likely expose their identities in criminal and presidential impeachment proceedings.

Paul caused a stir Monday at a rally for President Donald Trump by calling for the media to reveal the identity of a whistleblower who passed along information he or she believed implicated Trump in withholding aid to Ukraine unless the country opened an investigation into alleged corruption by Joe Biden's son Hunter. The next day, Paul said that he himself might reveal the whistleblower's name.

On Wednesday, Democrats in the Senate asked for unanimous consent to pass a resolution showing general support for whistleblowers. The resolution does not actually do anything—it's just a public acknowledgement that the Senate, in general, supports whistleblowers and encourages the executive branch to protect them from retaliation for any wrongdoing they might reveal.

If that's all Paul's bill did, that would be awesome. But there's more. Appended at the end is this section:

Congress reaffirms that, in the case of criminal prosecutions and impeachments arising from the disclosures of whistleblowers, the accused has the right to confront his or her accuser in such proceedings and that right is not superseded by the whistleblower protections.

In a companion piece over at The Hill, Paul explains this inclusion protects Trump's Sixth Amendment rights:

The "whistleblower's" revelation, however, has resulted in an impeachment proceeding, essentially a trial of the president. If convicted, the impeachment trial could lead to criminal penalties after the president's term in office.

Anonymity is not an option when your accusations trigger criminal penalties. The Sixth Amendment guarantees the right to confront one's accusers. The witness must both face his accuser and face questions regarding his own knowledge and activities.

The Ukraine investigation has not yet "resulted in an impeachment proceeding," and the House of Representatives has not yet voted to impeach Trump. Paul will know when that happens because he will essentially serve as a juror as a member of the Senate. What's more, impeachment is not a criminal prosecution. The only "penalty" that will directly come from impeachment would be Trump's removal from office.

Trump could face prosecution for his alleged actions following his departure from office. If the information from the Ukraine whistleblower were to be used as evidence in a criminal trial, Trump would be protected by the Sixth Amendment's right to confront and defend himself against his accusers. He doesn't need Paul's bill to exercise that right.

It's even reasonable to expect that Trump should be allowed to face the whistleblower if his impeachment proceeds to the Senate and the whistleblower's testimony is used as evidence. If the whistleblower won't come forward, Paul can use that as justification for declining to remove Trump from office.

But the way Paul is talking about revealing the whistleblower now—during the investigation itself—is akin to the police revealing the names of witnesses to a suspect long before that suspect has been charged with any crime. Imagine, for instance, what would happen if police were investigating a member of a violent street gang for shooting up somebody's house, and the police told the alleged shooter the names of eyewitnesses they had talked to before ever charging him. The Sixth Amendment does not require the naming of witnesses in an investigation, nor should it. The Sixth Amendment, as it is written, applies to "criminal prosecution." Leaving aside the question of whether impeachment proceedings fall under the category of a "criminal prosecution," Trump is merely being investigated at the moment.

What's more, Paul's efforts to publicly identify the whistleblower, were they occurring in an actual criminal investigation rather than an impeachment investigation, would look a lot like witness intimidation.

Paul may want to protect whistleblowers from a narrow set of government sanctions, but he'll also expose them any number of destructive consequences for speaking out against powerful and connected elected officials.

Naturally, some other lawmakers are making political hay out of this by running in the opposite direction in ways that are even more bad, stupid, and unconstitutional:

In the future, you will go to jail if you out a whistleblower. Legislation coming.

Will this debate get dumber? You can count on it.