Militias, Patriots, and Border Vigilantes in the Age of Trump

Jesse Walker | From the December 2019 issue 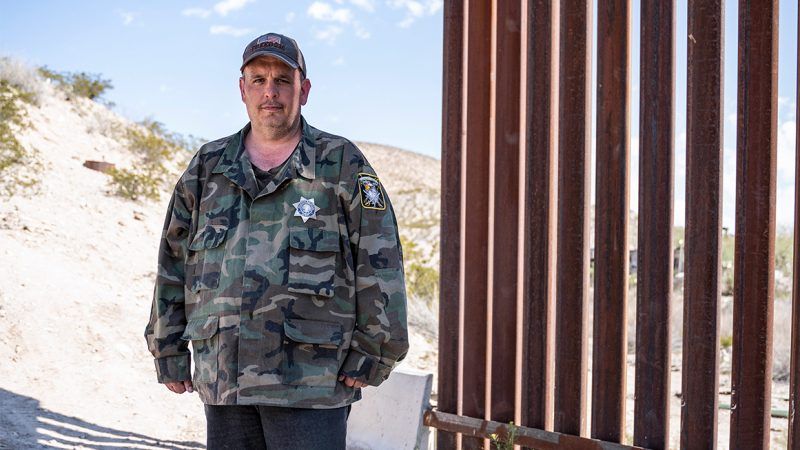 On April 16, 2019, an armed band of vigilantes calling themselves the United Constitutional Patriots "detained" at least 200 men, women, and children in New Mexico, then called in the Border Patrol to collect the captives. I put detained in quotation marks because most of the kneeling migrants being held at gunpoint were probably planning to present themselves to the authorities at the first opportunity anyway. They were here to seek asylum, after all. But in footage posted online, the gunslingers speak like they've seized an invading army. "We just got a note that a couple of kids are picking up rocks," a woman holding a camera declares as the feds lead some migrants away. "So be careful."

If you remember the days when George W. Bush was president, that story may have given you a gust of déjà vu. Several civilian border patrols cropped up back then too, most famously the Minutemen. These weren't the first paramilitary groups to go hunting for unauthorized border crossers—that had been happening for decades—but the Bush years were a boom time for the practice.

That, in turn, was part of a larger pattern. When Bill Clinton was in the Oval Office, the social space that would later be filled by the immigrant-fearing Minuteman movement was filled instead by the government-fearing militia movement. When Barack Obama became president, the Minutemen fell into factionalism and '90s-style militias began to grow again. Donald Trump's reign has seen a new surge of border patrols by nativist vigilantes. What do these shifts mean?

The easy reply is that this is just a matter of which party occupies the White House: Camo-clad right-wing populists are more likely to be afraid of a Democratic president than a Republican one, so they turn their guns outward rather than upward when the GOP is in power.

There is truth to that, but it doesn't explain everything. The Minutemen weren't exactly fans of George W. Bush. (Some of them disliked his immigration policies so much that they called for his impeachment.) And while the border paramilitaries have been re-emerging during the Trump years, the conventional militias—and the broader "patriot" movement of which they're a part—haven't dropped out of view. So what else has been going on?

For one thing, there's 9/11. The Bush-era border groups emerged for many reasons, but it's no coincidence that they took off after the attacks of September 11, 2001. Sometimes you can draw that line directly.

Consider Chris Simcox, one of the founding fathers of the Minutemen. After 9/11, he quit his job as a kindergarten teacher and tried to enlist in the military. He was told he was too old. Then he tried to join the Border Patrol. It rejected him too. After an interlude as an O.K. Corral re-enactor at a Tombstone tourist stop, he started patrolling the Arizona border. We may see Simcox "as someone wanting to circumvent the state," Harel Shapira recounts in his 2013 book Waiting for José: The Minutemen's Pursuit of America, yet "his first inclination was to join the state."

This wasn't a '90s-style story of a man radicalized by the feds' lethal decisions in Waco or Ruby Ridge. The event that inspired Simcox, and many like him, was an attack on the American homeland. The Clinton-era militias were a product of the post–Cold War moment, a time when an external threat was suddenly yanked from the psychic landscape and many Americans started shifting their suspicions toward Washington. The Minutemen emerged at a moment when the nation was on alert for outside enemies again.

The revival of the '90s-style militias coincided with a switch from a Republican administration back to a Democratic one. But it also came when a failed war and a financial crisis were restoking mistrust of American elites. That distrust affected the right as well as the left, particularly among the sorts of folks who are more likely to get politically involved by joining a militia than by joining a get-out-the-vote drive.

But the fear of the enemy outside persisted alongside the fear of the enemy above. It even intermingled with it. One of the most popular conspiracy theories of the era, after all, claimed that the president of the United States was secretly a foreigner. A man closely associated with that story is now himself the president of the United States. And as Trump intensifies Washington's immigration crackdown—which itself has been building since 9/11—the paramilitary border bands have been growing more visible too.

The "patriot" milieu was being pulled in different directions even before Trump took office, going back at least as far as the Ferguson riots of 2014. On one side, there are people who resent federal law enforcement but aren't eager to tie local authorities' hands. On the other side, a relatively libertarian element extends its critiques to the local police.

That was further complicated by the sort of drift that often besets movements over time. The Oath Keepers, founded in 2009, is a group of current and former cops and soldiers who initially attracted attention with a pledge to defy liberty-infringing unconstitutional orders. But the group has evolved in sometimes curious ways over the last half-decade. Lately it has spent a lot of time providing security at right-wing rallies.

Two more factors muddle the picture even more. One is the white nationalists of the alt-right, who sometimes draw on the same pool of potential recruits as the militias, though relations between the two movements are frequently frosty. The other consists of the armed "counter-recruitment" organizations that imitate the militias' iconography while advocating leftist (usually anarchist) politics.

The latter include Redneck Revolt (which also does security work at rallies, but on the antifa side), the John Brown Gun Club, and the polar opposite of the DIY border patrols: Land and Liberty, a group whose Facebook feed intersperses denunciations of the immigration crackdown with attacks on gun control and the surveillance state. Instead of celebrating the border vigilantes, it celebrates the civilians who do migrant rescue and relief work.

And if you check in on the militias based in places like the Midwest, far from the Mexican border, the immigration issue often just isn't a major concern for them. "Some of the traditional militia groups didn't even really talk about" the civilian border patrols, says Amy Cooter, a Vanderbilt sociologist who has done extensive fieldwork in the movement. "Or if they did, it was just sort of as an example of what good outstanding citizens should be doing to stop crime."

Some other elements of the patriot movement, such as the 3 Percenters, have been more enthusiastic about the civilian patrols. (Some of these organizations don't, in Cooter's view, properly qualify as militias, since they don't regularly meet to train with firearms.) Few in the movement are prone to Land and Liberty–style denunciations of the border branch of the security state, even though it's been engaged in the very activities—mass surveillance, internment camps, Fourth Amendment–shredding checkpoints—that the militias repeatedly decried in the '90s.

But there are exceptions. Most famously, Ammon Bundy, leader of the 2016 occupation of the Malheur National Wildlife Refuge in rural Oregon, has criticized the crackdown, put out a call to sponsor refugee families, and suggested that Trump might be playing up the alleged threat posed by the migrant caravans in order to justify the militarization of the border and the construction of a wall.

"I can't believe some of the people that just want to go down to the border and just wipe these people out," Bundy said in a 2018 Facebook video. "We're talking about militia groups, we're talking about people that actually profess to be Christian, who want to go out and just wipe 'em out….Do you not realize that thousands and thousands of immigrants come into this country a year, and the majority of them are actually benefiting our country greatly?" Anti-racist militiamen often make a point of contrasting their "civic nationalism" with white nationalism. Bundy went further, declaring that nationalism itself "is dangerous."

Bundy received some support from his fans after the video appeared, but he faced fierce backlash too. A few people even accused him of being paid off by a globalist conspiracy. That shouldn't be a surprise. A movement's suspicions don't just flow outward or upward, after all; sometimes they double back on the movement itself.