Halloween Is Supposed To Be (a Little) Scary

Halloween combines the two things we fear most in America today—kids actually leaving the house, and food other than hummus and baby carrots being fed to them.

Lenore Skenazy | From the December 2019 issue 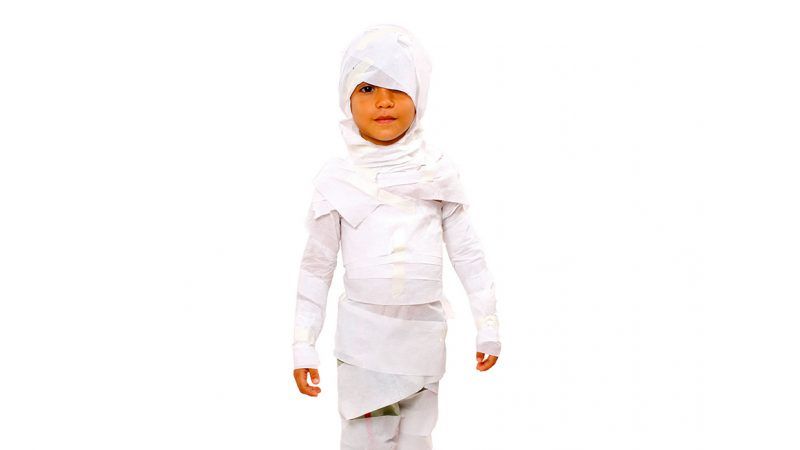 Hey there, parents! Got a giggly little ghost or goblin heading out for Halloween? Not for long.

"Halloween is an amazing holiday, when kids get to indulge in make-believe play and of course tons of candy! Unfortunately, as fun as this spooky holiday can be, it is statistically one of the most dangerous nights of the year."

So begins a typical upbeat/doomsday blog post, this one by a pediatrician who divides her warnings into such chipper categories as "Candy Catastrophes" and "Burns, Bruises and Broken Bones."

Burns are bad. Putting lit candles into pumpkins does seem stupid in this post-Edison era. But the author suggests that you not only get your kid a costume that isn't flammable, you also "go over and practice the principle of stop-drop-roll with your child, just in case his or her clothes catch on fire."

Hey kids! Let's get ready for a fun night…and melted flesh! A tradition that is actually extremely benign—kids playing dress-up and visiting the neighbors—is seen through the lens of extreme risk aversion, with every aspect given the attention usually reserved for a plane crash post-mortem.

"The nature of the holiday alone can make it perilous, as children wear loose fitting costumes." That's the staid U.S. News & World Report, getting worked up about tripping. Tripping! Kids trip all the time, but come Halloween that fact is rewritten as a "peril" that parents must take serious steps to avoid. The mommy blog She Knows goes so far as to tell parents to case the route in advance to make sure there are no "sidewalks in disrepair."

I guess if there's a crack, everyone will just have to stay home and play video games instead.

"Masks can limit your kid's range of vision," warns another safety site—which then warns about the alternative to masks: "Make sure to test any face paint on a small patch of skin a few days before Halloween to make sure your kid doesn't have a bad reaction." Parents are being told to prepare for the holiday as if it's outpatient surgery.

And of course, this is the month brought to you by the word tampering. So every article on the holiday insists you inspect your kids' hauls before allowing them so much as a single Smartie. Never mind the fact that no child has ever been killed by a stranger's candy. Lately, the warnings have evolved beyond "don't eat a Nestlé Crunch if there's already a bite taken out" to "have a system in place for your kids to trade out their trick or treating loot for other non-candy goodies when they get home" (advice from Molly Dresner, author of The Speech Teacher's Handbook).

A system in place? Doesn't that sound just a tad obsessive?

It has become almost a competition to see who can come up with the most outlandish fear and demand the most outlandish precautions. So the parenting lifestyle blog Babble told folks that if their little witch demands nail polish for the night, this should be applied with the windows open or, even better, outside, so the kid doesn't inhale dangerous fumes. Last year I overheard an acquaintance's tween daughter telling her friends that she'd wanted to wear a fake leather jacket for Halloween but nixed it because it was made of plastic and this could give her cancer.

"I don't want to die young," the girl retorted.

You gotta feel bad for the kids being driven from house to house in their not-too-long, nontoxic costumes, only to be allowed one well-wrapped treat at the end of the evening. But I feel even worse for parents, who are told they're basically killing their kids if they aren't on guard every second against cars, cancer, creeps, candles, candy, and—mwahahahaha!—cracks in the sidewalk.