Rep. Dan Crenshaw Claims We Have a 'Very Cost-Effective, Small Footprint' in the Middle East

He's wrong on both counts. 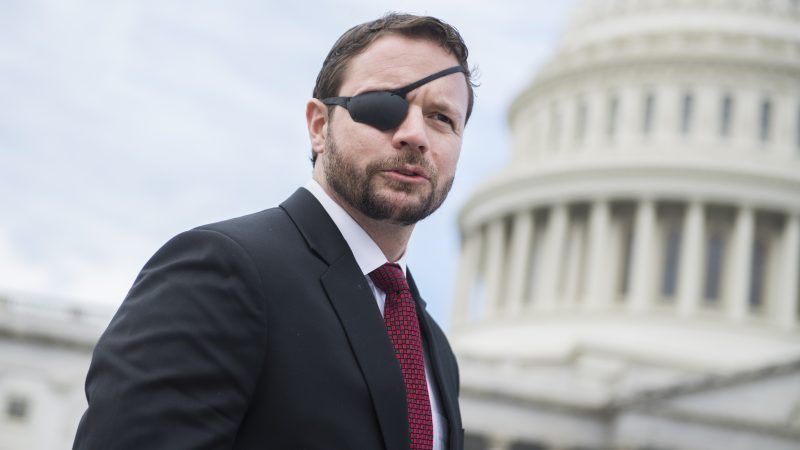 Rep. Dan Crenshaw (R–Texas) thinks that the United States has had a "very cost-effective, small footprint" in the Middle East that led to the death of ISIS terrorist Abu Bakr al-Baghdadi.

In an interview with Fox News' Dana Perino on Monday, the former Navy SEAL, who sits on the Homeland Security Committee, advocated for a "forward presence" in the Middle East to combat radical Islamic terrorism and protect the "homeland." Crenshaw lauded the 2011 assassination of Al Qaeda's Osama bin Laden and Saturday's death of Baghdadi as proof that the U.S. has been successful in its war on terror, which has lasted 18 years.

Crenshaw says he does "understand the frustration" over extended military presence abroad, but thinks it's necessary to protect America from "an ideology that truly wants to kill us."

The most obvious sign of the costs of war in the Middle East is the actual price tag. A recent study conducted by the Watson Institute for International and Public Affairs at Brown University found that the U.S. has spent and obligated $5.9 trillion dollars to wars post-9/11 through fiscal year 2019. This figure accounts for any war-related spending that "are consequences of these wars" as well—so it includes Department of Defense spending as well as "war-related spending by the Department of State, past and obligated spending for war veterans' care, interest on the debt incurred to pay for the wars, and the prevention of and response to terrorism by the Department of Homeland Security."

To put that number in perspective, it amounts to more than one-third of the current national debt.

The less obvious costs of America's foreign policy in the Middle East are measured in bodies and time. The Watson Institute also compiled the human cost of the United States' post-9/11 wars, finding that 6,951 U.S. soldiers and at least 244,000-266,000 Iraqi, Pakistani, and Afghan civilians have died directly due to war violence as of October 2018. Notably, the study doesn't even include the more than 500,000 lives lost in the Syrian conflict.

Back in 2007, Reason's Brian Doherty noted that that one day, war in Iraq might be perceived as having, "turned out well enough in the end." Doherty observed that, "Time can make every war seem like a good idea, or at least like not an obviously bad one. The progress of civilization being what it is, and people's ability to gin up strong feelings about events far away in space and time being what they are, it can all start to seem For the Best."

As Perino noted in the interview, Middle Eastern interventionism has turned into a "generational fight." "There are many people joining the military today who weren't alive on 9/11," she says. An entire generation of Americans have come of age knowing nothing other than perpetual war—not to mention the resulting debt and destruction. Crenshaw's "forward presence" strategy of U.S. involvement in the Middle East is doomed to continue America down this path, since there will always be another bad guy to pick up the mantle of extremism and fight. Throwing trillions of dollars and more young lives at the problem won't change that.